The public has been shocked to learn that since 2016 male prisoners in the UK have been allowed to ask to be transferred to a women’s prison. All they need to do is self-identify as a woman. Legal or medical transition is not required for permission to transfer meaning that legally-male prisoners complete with a penis are currently living alongside women in prison.

At Fair Play For Women we say that this transgender prison policy needs to change. The impact on women in prison has been ignored.

What do we know about transgender prisoners and their crimes?

Very little! So in 2017 we published our own new research showing that half of all known transgender prisoners require max security or specialist sex offender prisons.  Despite numerous attempts by others to discredit our work the MOJ has now confirmed the accuracy of our findings. Official figures released by the MOJ in 2018 show that half of all known transgender prisoners counted in April 2017 had at least one previous conviction for sex offences.

Our ground breaking work sparked extensive media interest in the topic for the first time. Dr Nicola Williams discussed the new findings on Good Morning Britain with Piers Morgan and our work was covered by the Sunday Times and a big two-page feature article in the Mail on Sunday. We submitted our findings to the Justice Select Committee as part of their inquiry into future prison planning. We highlighted the risk that women’s prisons could be overwhelmed by high-risk male sex offenders should GRA reform go ahead. We also raised concerns that this issue does not just put women at risk while they are in prison, but also in women-only probation hostels after they get released.

It’s not just us saying that transgender prison policy is dangerous. Prison experts can see the problem too.

At the end of 2017 a male-born transgender prisoner called Karen White was placed on remand in a female prison and went on to sexually assault two women inmates within days of arrival. Karen was convicted almost a year later, along with two more historic rapes. When this news became public the Justice Minister dismissed it as a ‘procedural error’ and not a policy failure. We fundamentally disagreed and re-doubled our efforts to shine a light on the policy.

Karen White sexually assaulted two women inmates: “The complainant felt something hard press against the small of her back. She could see the defendant’s penis erect and sticking out of the top of her pants, covered by her tights.”

We spoke up once again about the risks to women in prison. We were interviewed on the BBC Victoria Derbyshire Show, on both of BBC Radio 4’s flagship news programs the PM program and the Today program, as well as appearing on LBC and Talk radio.

We also launched a government petition calling for a full review of transgender prison policy – but this time in full consultation with women’s groups. Our work successfully triggered a ministerial response confirming that a new policy framework would now be developed and that the risk to women would be given full consideration. 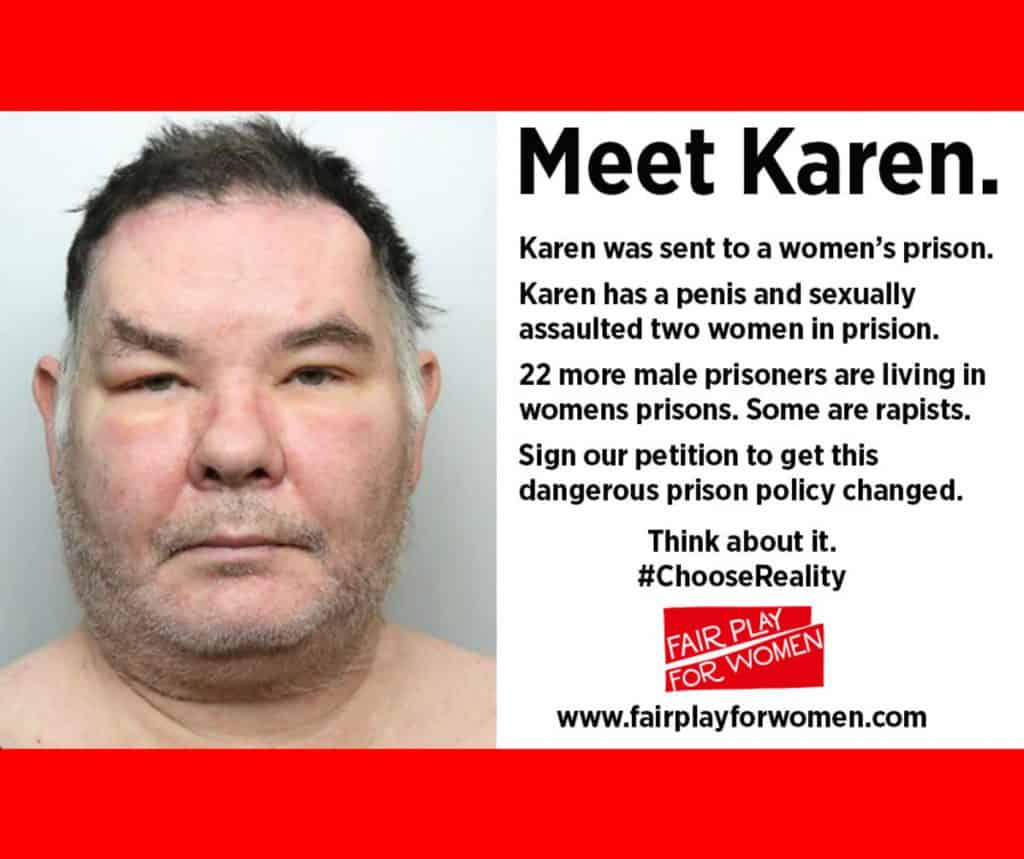 During the next few months we had many meetings with MOJ and HMPPS officials repeatedly highlighting the risk to women, not only the physical risk of sexual or violent assault but also the daily psychological impact of sharing prison time with males. We reached out directly to women in prison with an article in the prison magazine Inside Time (page 23) We wanted them to know we were speaking up for them and for them to write to us with their experiences and concerns. Many did.

Despite some improvements to ensure the physical safety of women in prison the new policy was still seriously flawed. Male-born transgender prisoners, including those with a history of sexual or violent offending against women, would still be allowed to mix with female inmates.

One brave woman in prison decided to make a stand and is now suing the government saying the new transgender policy puts her and other women in danger. Fair Play For Women is supporting her legal claim and has provided written evidence to the court regarding our engagement with MOJ and HMPPS officials. We also attended the court hearing on the 28th October 2020 which was adjourned on the day due to a late submission of evidence by the defence. The case was eventually heard on 2-3 March 2021.

The judgement was given on 2 July 2021. The judges ruled that the policy was capable of being operated lawfully. So the MoJ was not forced to review or rewrite its policy. However, there were significant statements in the judgement, and actions which the MoJ must now take, which we’ve spelled out in this analysis of the judgement.

Our work will continue to campaign & lobby for the best outcome for women in prison. This is our big chance to make this right. Women in prison are some of the most vulnerable women in society and the least able to speak up for their rights. They deserve kindness and care too.

Prisons timeline: How did we get here?