You are here: Home / Scottish GRA reforms / The latest poll in Scotland: be kind but keep single-sex spaces

The latest poll on attitudes to transgender people in Scotland, commissioned by the BBC (with full data tables here) reveals that many people still don’t see how trans demands affect us all. General support for people who identify as transgender is coupled with strong support for single-sex spaces and services.

Q7a asks whether it is important for legislation to continue to provide for single-sex spaces. The answer is unequivocal: 61% agree vs 10% who disagree. Knowing trans people or following the issues closely only increases this belief in the importance of single-sex spaces (table 11).

Having established that single-sex spaces matter, the survey goes on to ask several questions about which males should be granted access to women’s facilities. This is the problem in a nutshell. Boundaries? Sure. But now let me push you to give them up. Male-free spaces matter. Now which exceptions will you make?

Some issues need expert input, not the well-meaning general public

More people in this survey favour housing prisoners according to their gender identity than their sex (Q 10 table 19). Here at least, the one in five who say they don’t know are right. Most of us know next to nothing about prison life, even if we now understand it’s more Time than Porridge. Not even the Scottish prison service, which puts male rapists in a women’s prison if they say they are women, agrees that females who identify as males should be in men’s prisons. They realise that female people would be in grave danger in a men’s prison, and no identification can change that.

A general poll like this one reflects good intentions, but cannot be the basis of specialist policy. It’s the “be kind” response, but being kind to one group can unintentionally be unkind to others. Perhaps they do not know that 98% of sexual crime is committed by those born-male, and that trans identification does not change this male-pattern of crime. Likewise violence is a largely male offence. It’s committed against men and women alike but over 90% of convicted offenders are male. So we cannot take a symmetrical approach to the protection of single-sex spaces, or permitting access by males to female spaces.

Sport should be single-sex

Q 9 table 14 shows a majority in favour of keeping elite / professional sport single sex, particularly for women’s sport. There’s a more relaxed view on leisure/amateur sport, suggesting that people know it is unfair but feel it matters less. More than 1 in 3 people don’t have or won’t express a view on this at all. Fortunately, the Sports Councils Equality Group commissioned experts to provide guidance on this. Their comprehensive review is unequivocal that female sport cannot include transwomen while still being fair and safe for females.

This is already much bigger than you think

Question 2 shows how much trans identification has grown. Fewer than 6000 gender recognition certificates issued since 2004 in the whole of the UK (population: 67 million) but one in ten Scots have a family member or close friend who identifies as transgender. Almost half the respondents know someone who is trans. This is how much the trans phenomenon has grown. The Scottish government is proposing that all these people can rewrite their birth certificate on request.

Non-binary – having no legal sex – is not a popular idea 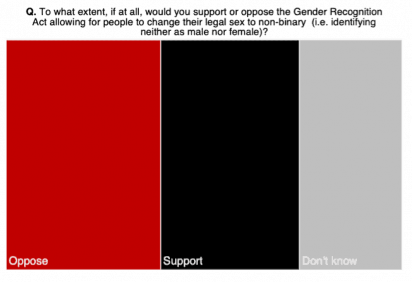 There is more opposition than support for the idea that people should be able to register their legal sex as non-binary (Q6 table 10). The survey doesn’t say why, but it is a strong signal that a majority know that sometimes sex matters.

But 19% have no opinion. That’s one in five of the population who don’t realise this is important. Where would “non-binary” people, legally neither male nor female, go if in need of a domestic violence shelter? Which prison should they go to? Which sport category can they compete in? If someone asks for a same-sex healthcare or social care worker, are these people ruled out? Most of the time we are all non-binary but sometimes sex matters, and we all have one.

Many people still have doubts, especially about under 16s

For all their live-and-let-live attitude, people still seem to know there’s a need for gatekeeping on the question of transition. Reducing the minimum age from 18 to 16 is not a popular idea (31% in favour, 53% against, Q 5_3, table 8). Even among those who closely follow the issue, it doesn’t garner majority support (48% in favour). 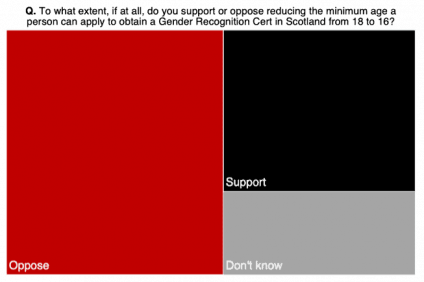 Q 17 asks about access for under 16s to medical interventions for transition. Here we see even more caution emerging, across all groups, with cross-sex hormones and surgery for under 16s both rejected as a step too far (table 36, 37, 38). Opposing these interventions for young people is a sign that no matter how tolerant and accepting most adults are, they feel children need protection from these life-changing, irreversible treatments. It suggests that many people harbour doubts about a young person’s ability to know that medical transition is right for them.

Q 12 asks about access to women’s facilities, and whether having a legal change of sex or gender reassignment surgery makes a difference. While 19% of men say there are no circumstances in which ‘transgender women’ should be able to use single-sex spaces, only 11% of women say the same (table 25). Is that because women find it harder to say no than men do? There is social pressure on females from childhood to be kind, illustrated for example by strongly gendered messaging on children’s clothes in high street retailers as shown here, here and here.

Q 15 asks about showing transgender people in primary school resources. Men are much less keen on this than women (table 30) though the differences cancel out. One wonders whether, if the question was whether children should be taught that they could be born in the wrong body, the answer would be different? Q16 asks whether under 16s should be allowed to transition at school without their parents’ consent. There is bias in the question, referring to ‘transgender people aged under 16’ as if such people are reliably identified by some objective means. Many people answering this question will not know that most youngsters desist if not affirmed. Even so, men are strongly against allowing such social transition (53% opposed vs 19% in favour) while women are evenly split on the issue. But 29% can’t say one way or the other.

What do women want?

The survey doesn’t ask about women’s needs or wishes. We get some perspective from Q 12 regarding access to ‘single-sex spaces such as public toilets and changing rooms’ for trans-identifying males (whom they call transgender women, arguably a bias in the question) with different degrees of transition, legal and surgical. But the question is entirely theoretical. No one sees other people’s genitals or birth certificates to access these facilities.

The question proposes that some males in some circumstances can access female-only facilities. Women’s expectations that they will not see a male person in their facilities are by implication dismissed as a non-starter. Yet since single-sex facilities are largely self-policed and operate through social norms, this means that males can no longer be challenged, since any male may be one who has had surgery or who has a GRC. Neither of these is visible. Given the strong support for single-sex spaces expressed in Q7a, a question about whether female people could still expect female-only space would likely have strong agreement. But this is incompatible with questions about what circumstances should permit male access

What does this all add up to?

Most people aren’t following the issue closely but are inclined to say yes to things that sound tolerant, such as letting transwomen into facilities of their choice. (Previous surveys in Scotland and elsewhere have had very different answers when it is explicitly stated that they may be intact males.)

Single-sex spaces have stronger support than any of the trans issues raised.

People are cautious about transitioning under 18s and even more so under 16s.

Discrimination seems like something we should all oppose, but sometimes it is necessary and legitimate. Hence the single-sex exceptions in the Equality Act. It seems people want to say yes to trans demands, but are also saying yes to single-sex spaces. These two positions are incompatible. The Scottish Government has been told this many times but insists there is no contradiction. But there is. Public opinion polls show up this contradiction.

The ‘transwomen are women’ mantra has created a widespread belief that trans-identifying males have a right to access to female-only spaces. But this is not the law. The Equality Act sets out how to navigate these potentially conflicting rights. The EHRC is due to issue new guidance on the use of the single-sex exceptions which should reinforce that single-sex spaces and services can be maintained.