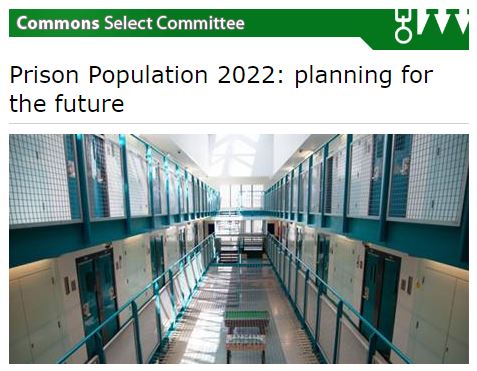 The Justice Committee is conducting a new inquiry into the prison population, to find out whether the Ministry of Justice and prison services currently have a credible approach to accommodating the changes anticipated over the next 5 years.

Written submissions have been called for and the evidence received will inform the Committee’s future work, including fuller consideration of how best to manage the prison population up to 2022.

Fair Play For Women have now submitted their own written evidence based on the findings of the transgender prisoner study conducted in October 2017. If self-declaration of gender becomes law there will be an inevitable increase in the number of trans-identifying male offenders transferring to women’s prisons. This will have a massive impact on the women’s prison estate in terms of both capacity and women’s safety. We hope the justice committee will take these important issues on board and will recommend that a comprehensive impact assessment is performed by the MoJ.

The impact of future increases in the number of trans-identifying male inmates entering the women’s prison estate.

Prison guidance PSI-17-2016 describes the care and management of transgender prisoners. It sets out clear rules which allow transgender-identifying male inmates (biological males who identity as female) to serve their sentence in the women’s estate. Trans-identifying males can only be transferred to a women’s prison if they have a gender recognition certificate (GRC) or on a case-by-case basis after a transgender case review. The government is currently consulting on changes to the process for obtaining a GRC. These changes would be expected to lead to an increase in the number of prisoners becoming eligible for transfer into the women’s estate. This written submission will present the evidence that the offending profile of trans-identifying male prisoners represents a serious risk to the safety, privacy, and dignity of women in prison. A future increase in the size of this male-born population in women’s prisons must be considered in the future planning of the prison service.

Trans-identifying people must show evidence of two years “living in role” and have a diagnosis of gender dysphoria in order to obtain a Gender Recognition Certificate (GRC). No physical changes are necessary to obtain a GRC, including no need for genital reassignment surgery. A GRC enables a replacement birth certificate with the new legal sex category to be issued. From this point on, the person must be regarded as legally male or female. If a male-born offender has a GRC or a birth certificate that states female they will be automatically sent to the women’s estate. There are no official figures on the number of male-born offenders with a GRC currently living in women’s prisons. However, some examples are known from newspaper reports such as the inmate called Jessica Winfield.

The government has recently announced a consultation on the reform of the Gender Recognition Act (GRA) 2004. This includes a proposal for self-declaration of gender identity to de-medicalise and speed up the process of obtaining a Gender Recognition Certificate (GRC). The need for a 2 year period “living in role” and a doctor’s diagnosis of gender dysphoria is expected to be abolished. It may well be as easy as filling in a form to change legal gender with no other action required. Any legal changes will also apply to trans-identifying people in prison. If self-declaration of gender becomes law, any trans-identifying male prisoner will be able to obtain a GRC and will automatically become eligible for transfer to a women’s prison. The women’s prison population represents just 5% of all prisoners in England and Wales. Any small increases in the number of transfers of trans-identifying males from male prisons would have a disproportionately large impact on the relatively small population of women prisoners. For this reason it is important that basic information such as the size of the trans-identifying male prisoner population and the types of crimes they have committed is known.

We submitted a number of Freedom of Information (FOI) requests regarding this question. We were told that the Ministry of Justice does not hold this information because there is no business or legal requirement to do so.

Andrew Bridgen MP has also submitted a written parliamentary question (question 115348) asking for numbers of prisoners transferred from male to female prisons and how many have been convicted of sex-related offences. The answer was that the information requested was not centrally held and could only be obtained at disproportionate cost.

ii) A similar observation has been published using official prison data and by interviewing transgender inmates in Californian prisons in the US. From a male prison population of approximately 130,000 men, a total of 298 trans-identifying males were identified. Sixty-eight of these were sex offenders (20.5%). This was higher than the average rate of sex offenders in prison among all male inmates (14.6%). Similarly, the proportion of trans-identifying males in maximum-security prisons (custody level 4) was higher than the average rate for all male prisoners (32.1 vs 22.8%).

ii) Academic studies also suggest a higher than average prevalence of activities such as cross-dressing amongst sex offenders. There is not much research on the subject but one study that evaluated the incidence in the general population found that nearly 3% of males reported sexual arousal from cross-dressing. The incidence of transvestism in sexual offenders, however, has been found to be very much higher. In a study of over 500 sex offenders, it was observed that over half exhibited transsexualism and/or cross-dressing as their primary paraphilia. Paraphilias are atypical sexual interests in objects, situations, or individuals. Repeat offending is more likely among sex offenders who have paraphilias (see study here). Among serious sadistic offenders, transvestism and fetishism are strongly represented (studies here and here).

The risk of prisoners abusing the gender change process was highlighted in two written submissions to the Trans Equality Inquiry held by the Women’s and Equality Committee in 2015.

“the ever-increasing tide of referrals of patients in prison serving long or indeterminate sentences for serious sexual offences. These vastly outnumber the number of prisoners incarcerated for more ordinary, non-sexual, offences. It has been rather naively suggested that nobody would seek to pretend transsexual status in prison if this were not actually the case. There are, to those of us who actually interview the prisoners, in fact very many reasons why people might pretend this. These vary from the opportunity to have trips out of prison through to a desire for a transfer to the female estate (to the same prison as a co-defendant) through to the idea that a parole board will perceive somebody who is female as being less dangerous through to a [false] belief that hormone treatment will actually render one less dangerous through to wanting a special or protected status within the prison system and even (in one very well evidenced case that a highly concerned Prison Governor brought particularly to my attention) a plethora of prison intelligence information suggesting that the driving force was a desire to make subsequent sexual offending very much easier, females being generally perceived as low risk in this regard. I am sure that the Governor concerned would be happy to talk about this.”

“psychologists working with forensic patients are aware of a number of cases where men convicted of sex crimes have falsely claimed to be transgender females for a number of reasons. a) As a means of demonstrating reduced risk and so gaining parole; b) As a means of explaining their sex offending aside from sexual gratification (e.g. wanting to ‘examine’ young females); c) Or as a means of separating their sex offending self (male) from their future self (female). d) In rare cases, it has been thought that the person is seeking better access to females and young children through presenting in an apparently female way. Such strategies in no way affect risk and indeed may increase it. Some people falsely believe that taking oestrogen and blocking androgen in males will reduce risk of offending, however this is not necessarily the case. Consequently the Society recommends that the Government give appropriate assistance to transgender people within the criminal justice system; while being extremely cautious of setting law and policy such that some of the most dangerous people in society have greater latitude to offend”

The women’s prison population is small (just 5% of the total prison population) and their offender profile is very different to that of male prisoners. Most women prisoners have been convicted of non-violent offences (84%). They are also a vulnerable group, with 46% known to be victims of domestic violence and 54% having histories of childhood trauma including sexual abuse. This vulnerable group of women may be forced to share their living space with male-bodied prisoners with a history of violence and/or sexual crimes. The impact on these women must be assessed. It is important that the rights of transgender people are balanced carefully against the rights of this vulnerable population of women.

Information supplied to the home office by GIRES (Gender Identity Research and Education Society) suggests that 1% of the UK population identifies as transgender. Based on the current male prisoner population in England and Wales (approximately 80,000), we would therefore expect there to be in the region of 800 trans-identifying males in prison. The lower figure of 125 transgender prisoners published by the MoJ may reflect the inadequate reporting of trans-identifying inmates by prisons or a reluctance among some inmates to disclose that they identify as transgender. In either case, implementation of the proposed reforms to the GRA that will make it easier to become legally female could lead to many hundreds becoming eligible for transfer to women’s prisons. The women’s prison population is currently around 4000 prisoners across 12 prisons in England and Wales. If 800 transgender inmates need to be transferred to the female estate this will significantly increase the occupancy of women’s prisons and will require the allocation of many more women’s prison places. This could be the equivalent of needing an extra two female prisons to accommodate the increase in numbers.

It is not only sex-offending males who may self-declare themselves as women under the proposed reforms to the GRA. Any male prisoner, whatever their crime, be it domestic violence against women, murder and torture of women, or any other offence, could self-declare themselves as female and demand to be moved to a female prison. The total number of male-born prisoners becoming eligible for transfer into women’s prisons could be very high.

There is evidence that the offending profile of male-born transgender prisoners represents a serious risk to the safety, privacy, and dignity of women in prison. The future size of the transgender-identifying male population housed in women’s prisons is likely to rise significantly if gender recognition reforms become law. This must be considered in the future planning of the prison service.