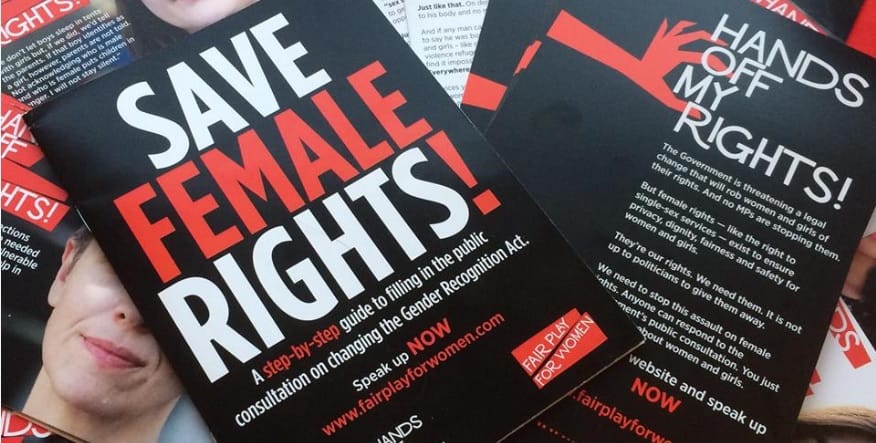 If you are told your mother is in a female-only hospital ward you need to be sure she won’t find someone born male in the bed next to her.

If you are told you’ll get a female health care professional to perform an intimate procedure you need to know that’s what you’ll get.

If you choose a female-only club or activity you need to know it will be male-free.

If you read about a ‘female’ sex-offender in the newspaper you need to be confident that really is their birth sex.

If your daughter is playing a team sport, she needs to be safe from the increased risk of injury to her if there is a trans-identifying boy in the other team – or even her own team.

Despite the UK Equality Act clearly stating that it can be lawful in all these situations to be female-only and to exclude males, even if they have a GRC, this is not what is happening.

Along with challenging policies in these areas, we are tackling the obfuscation and misleading language that conceals what is actually going on.

Can you believe newspaper reports about women committing sex crimes?

We are increasingly seeing media reports of “women” sex offenders, committing the sorts of violent and sexual crimes that are vanishingly rare for women. Usually, these are males who claim womanhood, and whom the police and courts have referred to as “she”. Although only a few cases such as Karen White and Katie Dolatowski have been widely reported, these are not isolated incidents. We are lobbying IPSO, the UK’s main media watchdog, to correct their Editors’ Code so that people can believe what they read. We have also produced a media guide to assist in fair and truthful reporting.

Sex and gender identity must not be conflated in data collection

Policy-making relied on good data, which in turn relies on clear language.  We are lobbying UK statistics authorities to ensure that the data they collect by sex can be relied on. They are facing conflicting demands from statisticians to collect reliable sex-based data, on the one hand, and from trans activists on the other hand, who want to answer the question, “What is your sex?” according to how they identify rather than birth sex.

Fair Play For Women has been working on this issue in relation to the 2021 Census since late 2019. This matters because all sorts of organisations in the public and private sectors, as well as academics, rely on ONS data to plan for people’s needs and to inform policies and decisions. Bad data leads to bad decisions. The approach taken by the ONS is considered the gold standard in data collection and is widely copied, so the problem spreads.

The proposed solution for Census2021, a sex question and a separate gender identity question, provides good data only if the ONS directs people to answer the sex question by birth sex, and not by self-ID. You would think trans activists would want this too, as it is the only way to get a meaningful picture of the size and nature of the trans population, which would help shape healthcare and other services for their needs. But trans activists want the sex question to validate their gender identity. They wanted the ONS guidance to say that people should declare their sex by how they identify. This will not generate good data. We know that 98% of sexual offences are committed by men, because of data collection by sex. If these policies continue, the data will be incorrect.

So we took  the Office for National Statistics to a judicial review in the high court, and we won. Here’s the full story of our fight to stop the ONS redefining sex in the census.

This was an important and high-profile victory, but the job is not done. We continue to lobby and challenge, to defend the meaning of sex as distinct from gender identity, so as to ensure reliable sex-based data is collected.

Sex vs gender: an important difference

Sex and the census: why surveys should not conflate sex and gender identity

Plans for the Scottish census in 2022

Non-binary: the new threat to women’s and girls’ rights

The new attack on our rights is coming from the claim that, in addition to male and female, some people are “non-binary”, neither male nor female. This sounds like a simple opting out of gendered expectations, perhaps even a progressive move, but it is far from harmless if it becomes embedded in law, as explained in this article in The Critic. Legal recognition for “non-binaries” is the aim of trans activist groups, who have lobbied for it to have legal recognition, and who supported a case at the Supreme Court to have it as a third option on passports. Recognising its importance, Fair Play For Women sought to intervene in that case, as did several trans activist groups. The decision was given in December, and went against Elan-Cane. Common sense has prevailed for now, though it is possible that the claimant Christie Elan-Cane will go to the European Court of Human Rights.

Erasing the words woman and mother is not inclusive

The very words we use to describe ourselves as a sex class are being erased. In media reports, in health campaigns, in human rights organisations, we are seeing the replacement of “woman” or “women” with terms like “menstruator“, “uterus-haver” or “people with a vagina“. Women tell us that they find this dehumanising, not inclusive. Our concern is that it blurs legal issues such as sex discrimination. This can only set women’s equality back. There is no upside for women in losing the words we need to talk about our bodies, our needs and our rights.

Listen to Dr Nicola Williams talk about the importance of the word “mother”  Transgender man loses appeal court battle to be registered as father on child’s birth certificate. 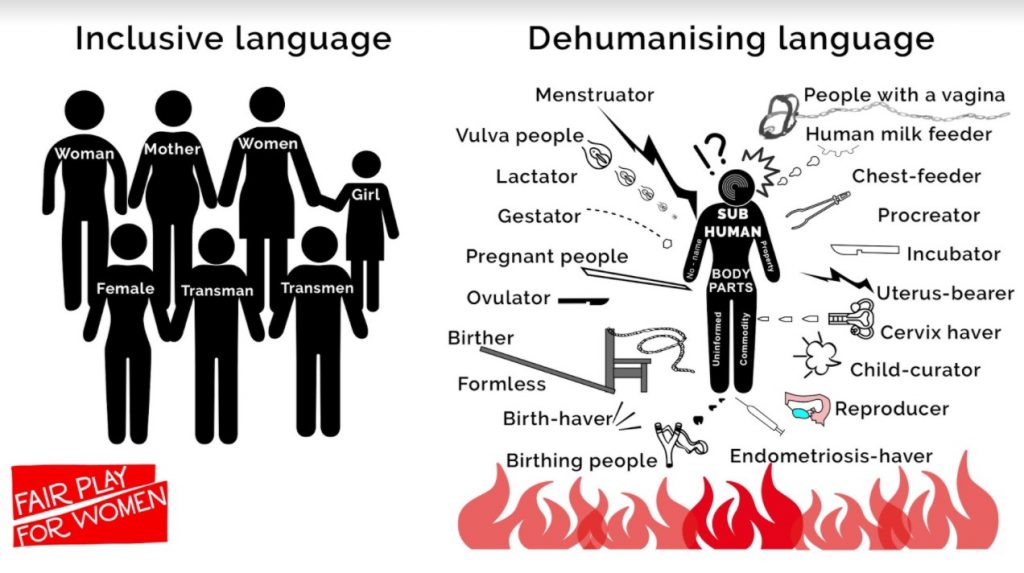