You are here: Home / Sport / Safeguarding is a top priority in sport – except when it comes to transgender inclusion. 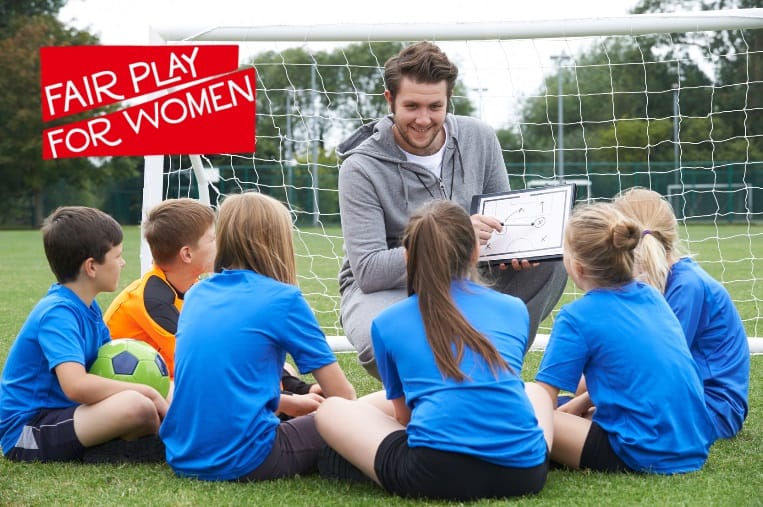 Allowing male adults or children to self-identify as female and access changing rooms of their choice is a clear safeguarding risk. Single-sex facilities are the norm in sport, as elsewhere, for both privacy and safety. No one suggests that all males are predatory, or all men and boys a risk, but we all accept that sex segregation is a useful safeguard. Yet trans policies throw this well-established safeguard aside.

Research conducted by Fair Play For Women has found that many of the sport national governing bodies (NGBs) in the UK have trans-inclusion policies that run counter to the standards of safeguarding children in sport. We refer to the 10 standards set out by the Child Protection in Sport Unit. 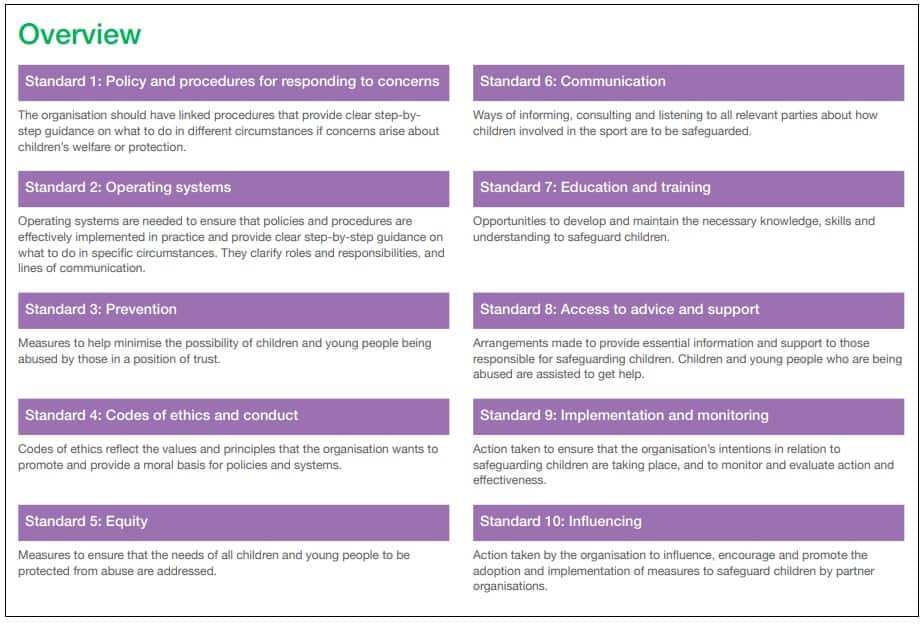 The criteria for Standard 1 requires safeguarding policies to be consistent with the law.

1.3 At a national level, child protection/safeguarding procedures are consistent with relevant legislation and government guidance.

However, one NGB responded to our concerns about safeguarding and about fairness with this comment:

“The Equality and Human Rights Commission Guidance “What Equality Law Means for your Business (2014)” specifically states that “anyone who identifies themselves as a woman – whether that is their legal status or not – can already use separate-sex facilities such as changing rooms, toilets or single-sex gyms”.

This statement is legally wrong and is NOT in any of the EHRC guidance. It appears nowhere in the original 2014 guidance or the updated version published in 2018). In fact, it appears nowhere in UK law. Yet it is widely cited as true. Rather shockingly, it appears that this NGB has simply copied and pasted this ‘advice’ from an article on the internet.

UK Equality law is actually very clear that transgender people CAN be excluded from single-sex services when this is objectively justified. When it comes to using changing rooms it’s generally accepted that the safety and privacy of girls is a legitimate aim which is why it’s not unlawful to exclude males, irrespective of their gender identity. The example of single-sex changing rooms is given both in the explanatory notes of the Equality Act (paragraph 738) and the EHCR statutory guidance (paragraph 13.54e).

A transgender person without a Gender Recognition Certificate (99% of all trans people) remains legally the sex they were born. So in the vast majority of cases a transwoman is legally considered male/man when it comes to single-sex services, so they can be lawfully excluded from a female-only changing room on the basis of being male not because they are transgender. Even in the rare case of a transwomen having legally transitioned to female there is legislation available that still allows for their exclusion when objectively justified.

For a comprehensive summary of the laws regarding changing rooms you can read our policy guidance here.

Also from an NGB email response:

“We believe it is highly unlikely that a participant who is not trans would claim that they identify as female simply to access the girl’s changing facilities or toilets. We are confident that clubs would be able to tell the difference between someone who is genuine in their intention to live permanently in the opposite gender and someone who has an ulterior motive for accessing these facilities and would identify the latter scenario correctly as a child protection issue that should be reported without delay.”

Service providers have a duty of care to all participants and this includes prevention of foreseeable risk. It is naïve at best to suggest that volunteers or staff can and will determine on sight who is and isn’t “genuine”, and will be confident to act accordingly. The pressure this puts on club managers and volunteers is unreasonable – to make judgement calls and then intervene in a timely way to call out the imposters?

There will be legal action. Either from women or girls bring harassment claims against clubs because their safeguarding policies have created an intimidating, hostile, degrading, humiliating or offensive environment for females. Or victimisation claims brought by transgender people called out by staff as imposters.

Also from an NGB email response:

“We have no evidence to suggest that trans girls present a safeguarding risk to other participants. The use of gendered toilets and changing facilities can be a source of considerable anxiety for trans young people, who evidence suggests are often more vulnerable than other children to bullying and abuse by their peers.”

This runs counter to standard 5, equity, since the needs and preferences of other children for single-sex spaces are not considered. Trans people do not present a risk because they are trans, but being male does carry a safeguarding risk to females. The use of mixed toilets and changing facilities can be a source of considerable anxiety for all young people, and some adults too. Why is this not a consideration? We are already hearing of girls who are put off by this.

Standard 6 states: Policies, procedures and systems are only effective if everyone involved in the organisation (including young people and parents) are aware of them, have some ownership of them and have the opportunity to express their views on how they are working.

However, it is commonly found that sports trans-inclusion policies have been developed without engaging all stakeholders, such as women and girls.

For example, Equality In Sport, the guidance for NGBs produced by the home country Sports Council Equality Group, lists 18 organisations to approach for further help and guidance. 14 are trans-oriented and not one of these is concerned with women and girls, or with safeguarding.

Also, the trans inclusion policy of a major NGB states:

“We recognise that there may be some concerns about fairness in the women’s and mixed game. Our policy assumes that trans women (male-to-female trans person) wishing to compete in mixed or female sanctioned competitions do so with the best of intentions and with no intent to deceive about their status to gain any competitive advantage. Accordingly, you should accept people in the gender they present and verification of their identity should be no more than that expected of any other player”

“Trans members should have access to toilets and the changing room that corresponds to their gender identity. Complaints from other users must be handled carefully. It may be that other users find it uncomfortable to share facilities with trans people but it is the duty of venue officials to ensure that confidentiality is not compromised and that members are not subjected to abuse, whether physical or verbal, on any ground. However other users’ or members’ discomfort must not be ignored and they too should be treated with dignity, should their discomfort continue they may arrive ready changed for their activity.”

It is clear that all relevant parties have not been listened to, since the policy concludes that only the trans person’s feelings are taken into account in resolving any problems. Perceived unfairness is recognised but dismissed. Concerns about sharing changing rooms are resolved by removal of the concerned person/ people, not the trans person.

In the rush to develop trans-inclusion policies, this important policy area has been left to the Equality and Diversity teams. However, it is crucial that a multi-disciplinary approach to taken to ensure future policy in this area is fit for purpose and considers the impact on all.

It is a priority that safeguarding experts must be involved in trans-inclusion policy development to ensure safeguarding basics are not overlooked. 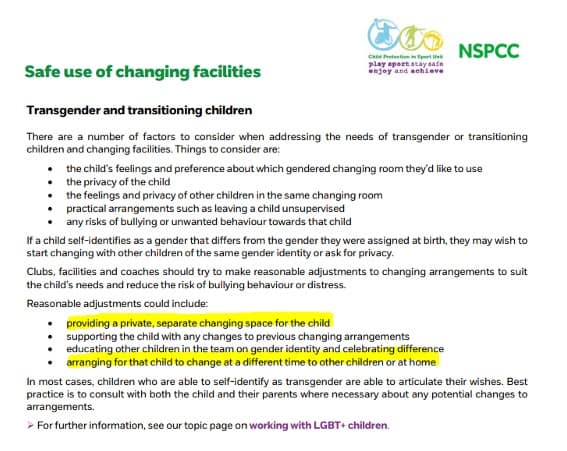 This is what happens when the safeguarding is not joined up with thinking on trans-inclusion:

Swim England and the Amateur Swimming Association (ASA) is currently working with the CPSU and commercial facility providers, to try to encourage pool providers across the nation to separate the sexes of school-age children in mixed changing villages.

“We strongly recommend that clubs engage locally with pool providers to create simple barrier systems, or make use of natural barriers between cubicles (e.g. lockers, etc.) to enable mixed changing villages to be used as separate changing areas for either sex. This is likely to help prevent the crime of any covert use of cameras or phones, etc. by one person on another of the opposite sex.” Wavepower 2016–19.

“Recent evidence suggests that girls are more adversely affected by the risks than boys – it is not a gender neutral practice, it’s something that is shaped by pre-existing gender dynamics and reinforced through the use of the technology.”
NSPCC – Children, Young People and Sexting May 2012.

The guidelines, published by Swim England in December 2017, advised leisure centres that visitors who choose their gender — and may not have had reassignment surgery — should be allowed to use the lavatories and changing rooms of whichever sex they felt was appropriate.

Swim England Health and Wellbeing Manager Jamie Hooper said: “This guide is a hugely positive step forward for Swim England in supporting the trans community to access safe and inclusive swimming spaces across the country.

This guide has been created in collaboration with a number of key partners. These include Stonewall, Gendered Intelligence and members of the Trans and Gender non-conforming Swimming (TAGS) group. It is based on accurate insight from a number of sources and best practise case studies.

The document further elaborates with a section that was reproduced on Mumsnet, which reads: ‘You may need to do some education work with other centre users who may be concerned when sharing a space with a trans person, especially if a trans customer looks to have different physical characteristics to the gender they are identifying with i.e. a male to female trans customer who has not had top or bottom surgery may still look like a male to others’

After complaints the “guide to engaging trans people in swimming” was pulled. Swim England have yet to publish new guidance.