You are here: Home / Prisons / We asked female prisoners what they thought about sharing with male sex offenders. Why didn’t the MOJ? 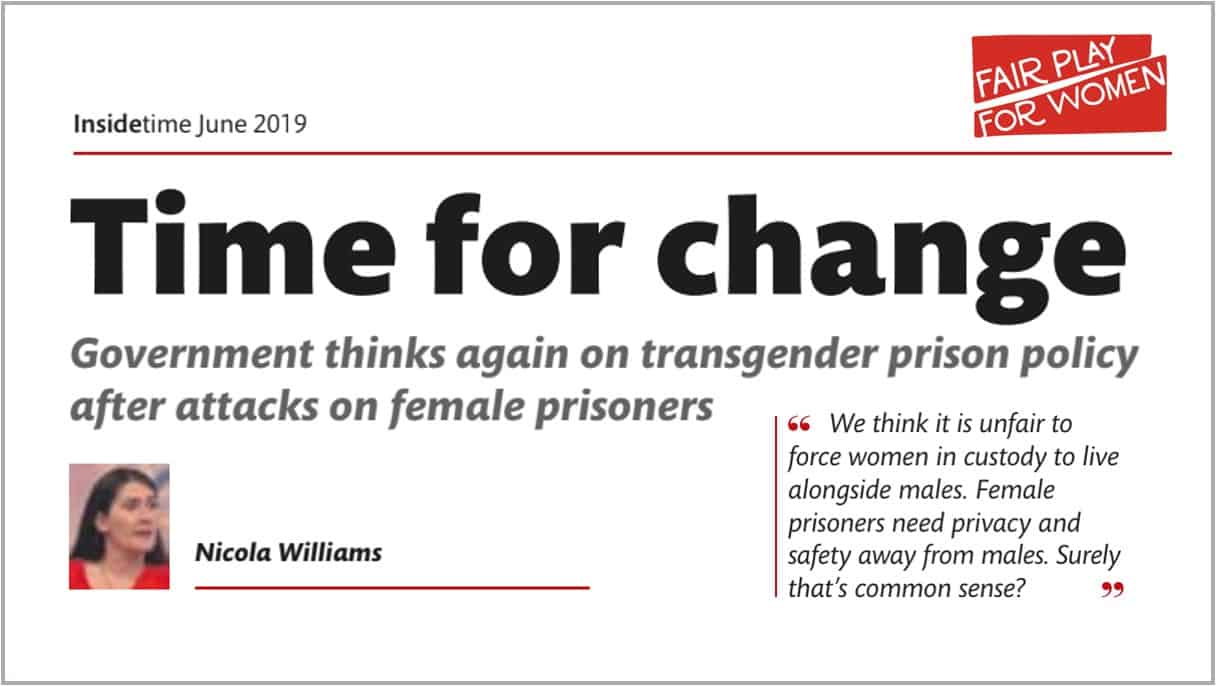 Most women in UK jails are not there for violent crime, yet they find themselves locked up with male sex offenders and males with a history of violence against women. After male sex offender and transgender prisoner Karen White sexually assaulted two women in prison the MOJ reviewed the prison policies and procedures that enabled it to happen. Fair Play For Women spoke with the MOJ and HMPPS officials whose job it was to improve the policy about the many risks to women in prison. We were shocked to learn when the policy was first being devised they met with and spoke with groups of transgender prisoners but not with any female prisoners.

We wanted to make sure the concerns of women in prison could be heard. So, in June 2019 your donations to Fair Play For Women paid for an advert in the prison magazine called Inside Time. Each month this publication goes out free to every prison in England and Wales and is read cover-to-cover by most prisoners. It offered us a unique way to reach out directly to jailed women to ask them what they really thought about sharing their spaces with male-born transgender prisoners, including sex offenders, and the transgender prison policy that made that possible. 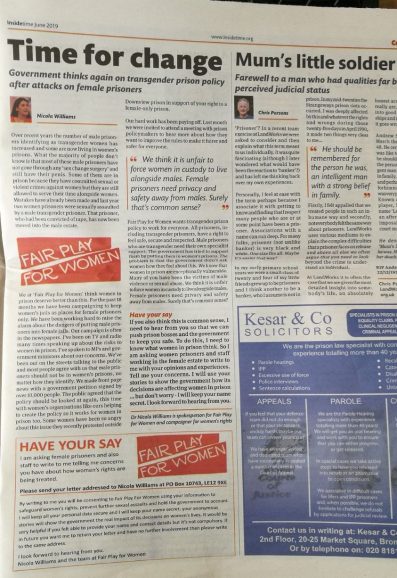 Here’s what we wrote to them:

Over recent years the number of male prisoners identifying as transgender women has increased and some are now living in women’s prisons. What the majority of people don’t know is that most of these male prisoners have not gone through any ‘sex change surgery’ and still have their penis. Some of them are in prison because they have committed sexual or violent crimes against women but they are still allowed to serve their time alongside women. Mistakes have already been made and last year two women prisoners were sexually assaulted by a male transgender prisoner. That prisoner, who had been convicted of rape, has now been moved into the male estate.

We at ‘Fair Play for Women’ think women in prison deserve better than this. For the past 18 months we have been campaigning to keep women’s jails as places for female prisoners only. We have been working hard to raise the alarm about the dangers of putting male prisoners into female jails. Our campaign is often in the newspapers. I’ve been on TV and radio many times speaking up about the risks to women in prison. I’ve spoken to MPs and government ministers about our concerns. We’ve been out on the streets talking to the public and most people agree with us that male prisoners should not be in women’s prisons, no matter how they identify. We made front page news with a government petition signed by over 10,000 people. The public agreed that the policy should be looked at again, this time with women’s organisations like ours helping to create the policy so it works for women in prison too. Some women have been so angry about this issue they recently protested outside Downview prison in support of your right to a female-only prison. Our hard work has been paying off. Last month we were invited to attend a meeting with prison policymakers to hear more about how they
want to improve the rules to make it fairer and safer for everyone.

Fair Play for Women wants transgender prison policy to work for everyone. All prisoners, including transgender prisoners, have a right to feel safe, secure and respected. Male prisoners who are transgender need their own specialist support. The government has tried to support them by putting them in women’s prisons. The problem is that the government didn’t ask women how they feel about this. We know that women in prison are exceptionally vulnerable. Many of you have been the victims of male violence or sexual abuse. We think it is unfair to force women in custody to live alongside males. Female prisoners need privacy and safety away from males. Surely that’s common sense?

Have your say. If you also think this is common sense, I need to hear from you so that we can push prison bosses and the government to keep you safe. To do this, I need to know what women in prison think. So I am asking women prisoners and staff working in the female estate to write to me with your opinions and experiences. Tell me your concerns. I will use your stories to show the government how its decisions are affecting women in prison … but don’t worry – I will keep your name secret. I look forward to hearing from you.

We received many letters in response. Letters that we promised to keep confidential so we won’t be publishing them in full here or anywhere else, but we can share a couple of anonymous quotes. The real-life and heart-felt responses we received inspired us to keep going and even more determined to hold the MOJ and prison service to account.

They still have there [sic] men parts and walk around with one officer. No one feels safe but everyone is scared to say something as they don’t want to make their sentence worse.

It is only a matter of time before someone gets raped.

The MOJ’s transgender prison policies are now subject to a Judicial Review. A brave female prisoner has stepped forward claiming that the MOJ’s transgender policies indirectly discriminate against her on the grounds of her female sex. The policies that make it possible for male sex offenders who identify as transgender to be transferred to women’s prisons did not adequately consider the impact on the other prisoners, who are some of the most vulnerable women in society. Her legal team will be asking for these discriminatory transgender policies to be quashed by the court so they can be done again, this time properly evaluating and taking into account women’s needs too.

Fair Play For Women has been pleased to be able to support the claimant by providing her legal team with evidence, information and a written statement for the court about the engagement we’ve had with the MOJ and HMPPS regarding our concerns for the safety and well-being of women in prison. The hearing was scheduled for 28th October 2020 but was adjourned on the day due to the late submission of evidence by the defence, the MOJ – evidence which they argued was relevant but not disclosable. There will be a new hearing early in 2021.

Our director, Nicola Williams, will be following the full proceedings and tweeting live updates and commentary on the case. You can follow us on twitter here.

We wish the claimant and her legal team every success and we hope this will be the first positive step towards getting good policies that work for everyone in prison, including women, who should not have to share with violent male sex offenders.

Fair Play For Women asked women in prison what they thought about sharing with male sex offenders. Why didn’t the MOJ?