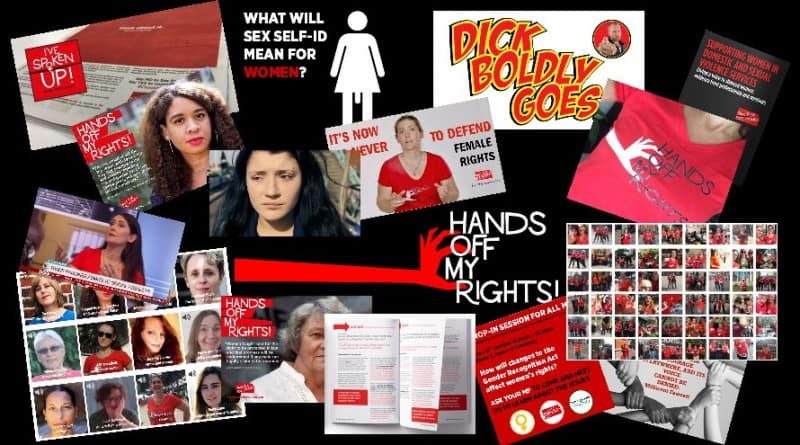 On 3rd July 2018 the government announced the launch of a four month public consultation about changes to the Gender Recognition Act 2004. Powerful transgender interest groups were lobbying hard for full deregulation of the legal transition process, a process known as Sex Self-ID, that would allow any man to change his birth certificate on demand to say he was born female. Despite the obvious conflict with female sex-based rights, the public consultation was set to proceed amid a climate of fear which has stopped most women from speaking openly about their concerns, and has also stopped mainstream media covering the issues. For this reason, public awareness has been virtually non-existent and political bias has been clearly in favour of reform. This bias was made clear with the statement in the commons by the Women and Equalities Minister, Penny Mordaunt, that the consultation would begin and end with the fact that ‘Transwomen ARE women’.

It was against this backdrop that Fair Play For Women, a small grassroots women’s campaign group, decided to launch our own ambitious public awareness campaign to ensure that female voices were heard and listened to during the public consultation.

On 17th June we launched our first public crowdfunder to save women’s rights, raising £20387.20 for our campaign funds, and this was followed by the Hands Off My Rights crowdfunder on 15th September which raised a further £9949.58. We received massive public support, with almost 1000 individual donations of around £30 each on average. With the dedication and determination of a handful of experts in their respective fields, we used these funds to deliver a professional and effective campaign to rival all of the well funded interest groups like Stonewall. So successful was our campaign that our detractors declared that we must be in receipt of secret funding from far right US evangelists! They simply couldn’t, or wouldn’t, entertain the idea that a bunch of intelligent and courageous women, who care deeply about the sex-based rights of other women and girls, could organise and pull off such an audacious feat.

On 1st September we launched our #HandsOffMyRights campaign with an army of hundreds of street campaigners ready to take our message to the public. It was incredible to see so many ordinary women, most of whom had never campaigned before, find the courage to speak up in public about their concerns. These women broke the silence and are the heroes of our campaign! 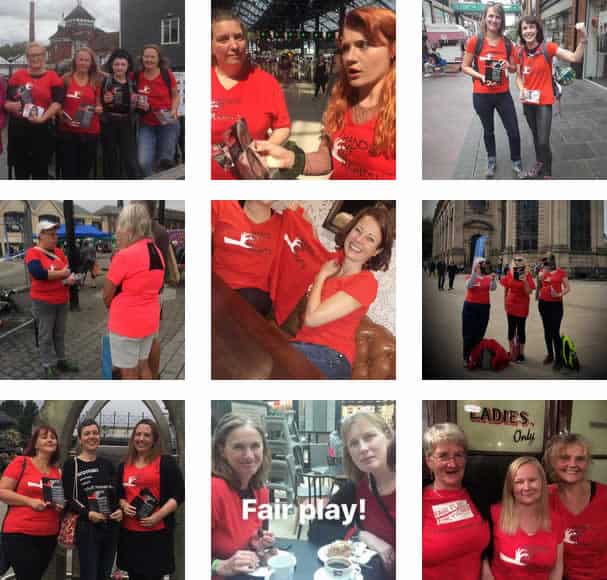 For years the myth of the ‘evil TERF’ has been peddled by transactivists to shame and intimidate women into silence. They caricature our views as hateful, bigoted and transphobic, when in fact we represent the views of the majority of ordinary people in the UK who can plainly see the most obvious conflict of rights. Quite simply, if any man can be a woman just because he says so, then the word woman becomes meaningless and so do female rights.

At Fair Play for Women we support everyone’s right to look and dress as they wish, to be as traditionally masculine or feminine as they want, or to break out of oppressive gender norms as so many of us do, and not to be treated unfairly because of it. It’s absolutely right that transgender people have their own category under equality law, and protection from discrimination.

Females exist. Women and girls exist. We share unique characteristics because of our biology and the way our femaleness is treated by society. We share a high risk of being victims of violence and discrimination. We MUST retain the right to define ourselves uniquely in law so we can fight for our shared needs.

The Gender Recognition Act is a legal mechanism for male-born people to enter the protected characteristic of the FEMALE sex. It is ludicrous to think that women should not be allowed to express a view on this, and at the very least the public must be made aware that deregulation of this law is on the cards. This is not an anti-trans campaign. This is a pro-female campaign. In a democracy, during a government consultation process, we have every right to say that this is a bad law and to point out how this will impact privacy, safety and fairness for women and girls.

How did we use your campaign donations?

We produced a set of printed campaign materials for street volunteers to hand out. By the end of the seven weeks we had printed and distributed over a third of a million pieces of campaign literature. 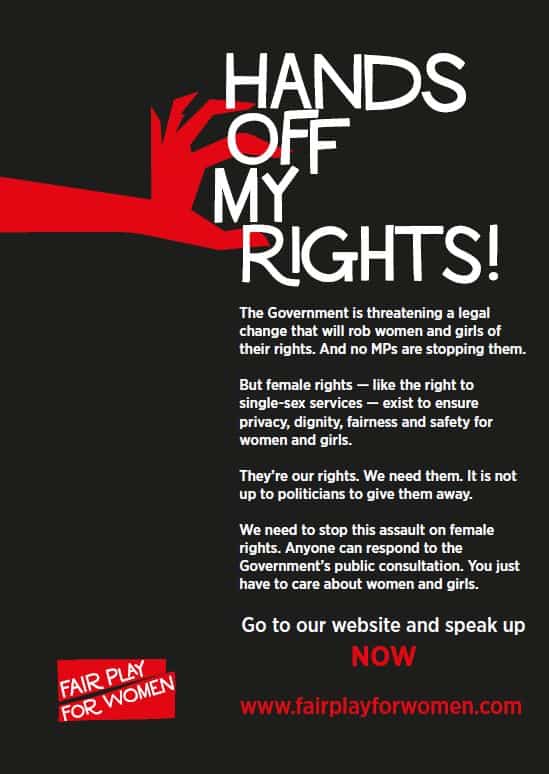 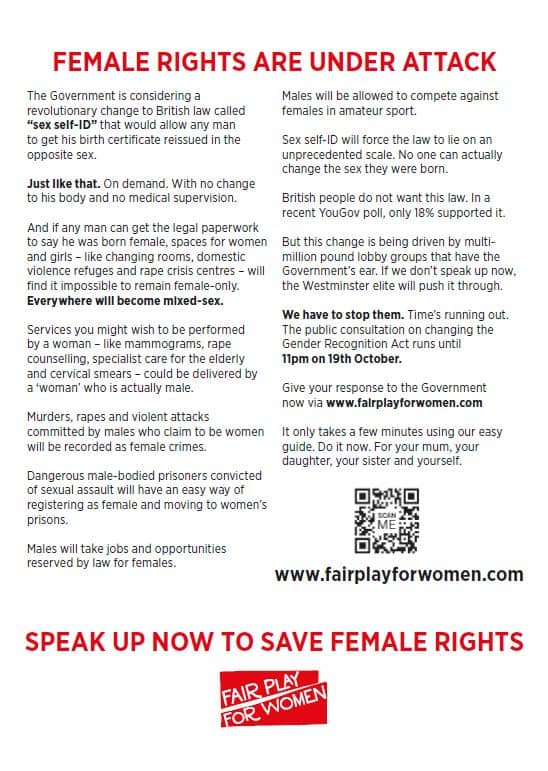 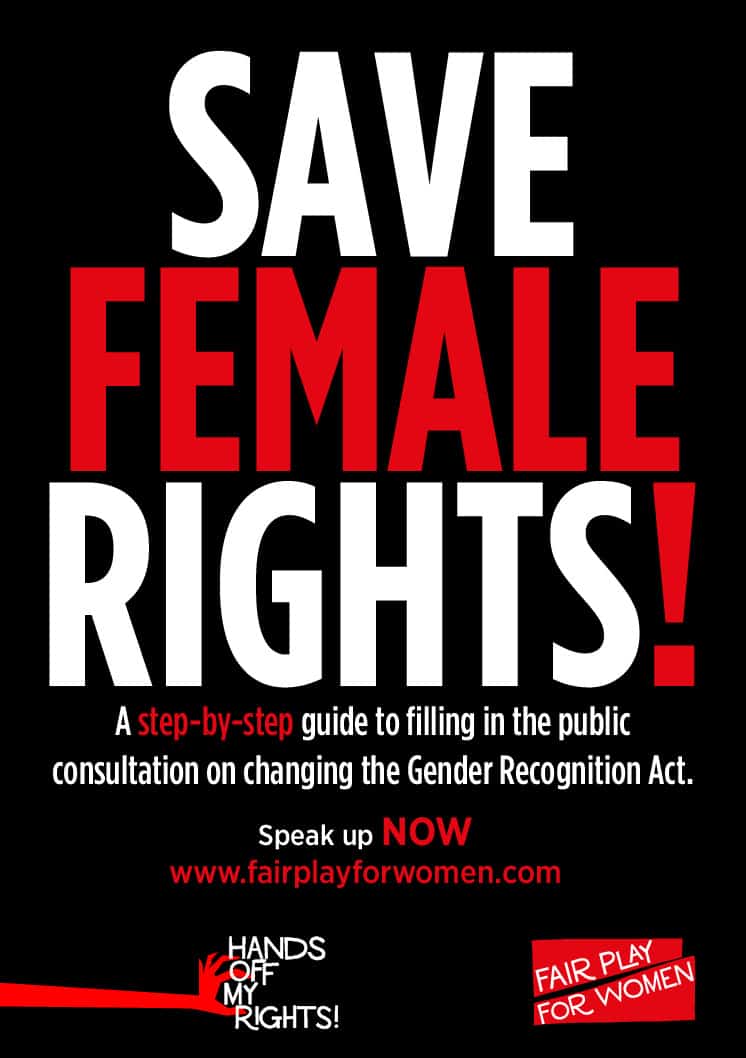 We set up ways for the public to get involved, such as the ordering of campaign packs, an opportunity to buy our exclusive #HandsOffMyRights red T-shirts, the production of badges to download and use on social media, invitations and instructions on how to host a #LetUsEatCake party and ways to join a local street campaign group. We established over 25 local campaign groups during the campaign, many of which are now thriving discussion groups which continue to present an opportunity for gender critical women to meet and share ideas.

We produced a set of professional quality campaign films to share on social media and to get the message of our campaign out to a wider audience. With the enormous generosity and hard work of a highly skilled production team, led by an ambitious, experienced and dedicated film director, we were able to produce a set of films worth in excess of £100,000 in the space of just a few weeks, at just a fraction of the market cost. These films reached a huge audience and were viewed in excess of 100,000 times. 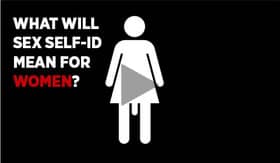 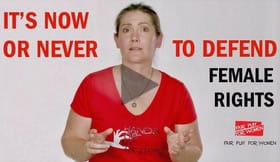 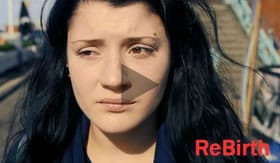 We paid for a full-page advert in the Metro newspaper, designed to raise awareness of the consultation amongst the public. This was extremely successful and allowed us to reach a huge public audience (Metro has a readership of approx 2 million nationwide). 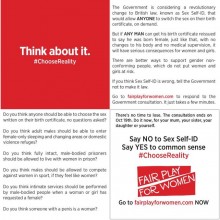 We produced information and guidance to help people understand the issues and to complete the consultation. This included a 20 mins podcast, background information on all the questions in the consultation and a step-by-step guide for people to follow. We distributed 3000 printed guide booklets and many more were downloaded.

We rebranded the website to make it more accessible, with a focus on the campaign and a brand new audio gallery for people to hear why our supporters defend female rights. We also now have an extensive library of our own research and articles for further information. Over the course of seven weeks of the campaign we attracted in the region of 60,000 first time visitors to our website. We also ran a very successful social media campaign resulting in 1000 email subscribers, 4000 Facebook followers, 350 Instagram followers and 9000 Twitter followers. 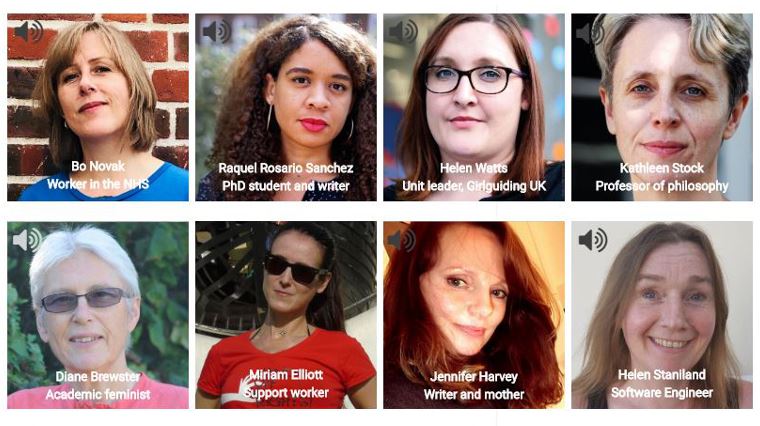 An important part of our campaign was to highlight the problems foreseen in the Violence Against Women sector. We dedicated one of our films to this issue and conducted original research compiling evidence of the silenced voices of service users and professionals. A copy of the report was sent to every MP and it has been submitted as evidence to the Government Equalities Office as part of the consultation. 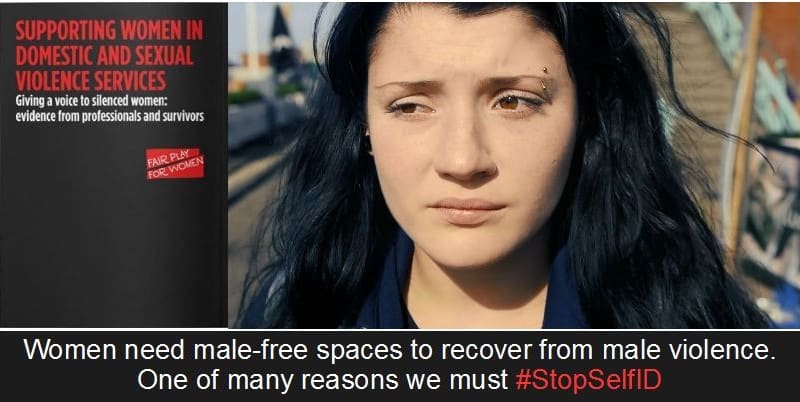 We also ran a highly successful PR campaign resulting in numerous print, radio and TV appearances. Our spokeswoman, Nicola Williams, appeared on Talk Radio’s Julia Hartley Brewer Breakfast show many times throughout the consultation. She was also interviewed on Radio 4’s Today programme and PM programme and was a guest on Woman’s Hour. She appeared twice on the BBC’s Victoria Live show, in a BBC Newsnight report, on BBC News and in a Sky News special report. This success was despite a clear and concerted attempt by transactivists to block interviews going ahead: there were numerous examples of Fair Play’s participation being cancelled, or the topic dropped, after a last-minute refusal to debate with us. 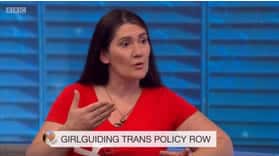 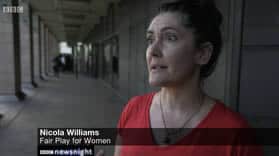 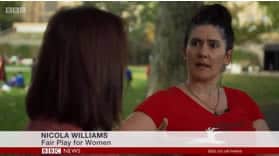 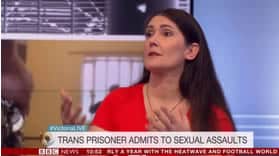 In addition to our public campaign we also did a lot of work behind the scenes, meeting with politicians and institutions throughout the consultation period. Fair Play For Women contributed to two round-table discussion meetings held by the Government Equalities Office as part of the consultation process, one regarding women’s organisations and one concerning the impact on prisons. We have also met with the Equality and Human Rights Commission (EHRC), MOJ, HMPPS and other professionals. We had a joint meeting with Women’s Place UK to discuss our concerns with the co-leaders of the Green Party, Caroline Lucas and Jonathan Bartley, following the resignation of Aimee Challenor. They have disappointingly so far not agreed to publish a joint statement about the content and areas of common ground reached in this meeting. More promisingly however, we (together with WPUK and Transgender Trend) held a drop-in session at the House of Commons for MPs to hear our concerns and ask questions. Approximately 50 MPs (or their representatives) attended the meeting in response to pressure from their constituents. The importance of this meeting was highlighted by a recent ComRes poll commissioned by the Times Newspaper, showing that the majority of MPs are concerned about the conflict of trans legislation with female rights, but do not publicly speak out for fear of backlash by transactivists. 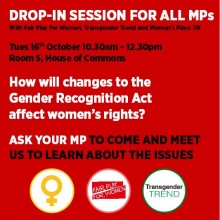 In the closing weeks of the consultation we launched our 1-click solution to allow members of the public to register their opposition to Sex self-ID. The on-line consultation document with its accompanying 25 questions was dense and difficult to understand, which was a significant barrier to participation. The validity of this system was confirmed by the GEO and over 20,000 submissions were made by this method. 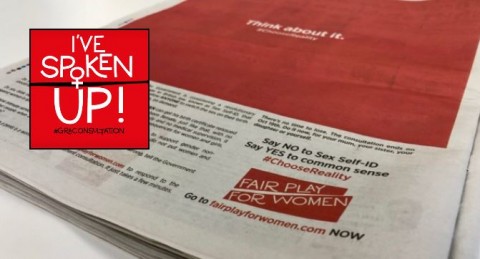 With your help we delivered:

Thank you to everyone who supported us during the consultation. Most politicians, the mainstream media, and UK institutions, turned their backs on ordinary women. It was therefore up to ordinary women to organise and run an audacious grassroots campaign to get our voices heard. Together we have shifted the public debate, in an area in which we are legitimate and essential stakeholders. Females exist and deserve to be heard. We’ve found our voice and will not be bullied into silence any longer.

The consultation submissions are now being analysed and results are expected to be published in Spring 2019. In the meantime there is plenty for us to do. Fair Play For Women will now be turning its attention to raising awareness of the Self-ID policies in use NOW. We will continue our support of the Violence Against Women sector, to ensure that the silenced voices of professionals and survivors will be heard.

We will also continue our work advocating for women in prison, whose safety and dignity is put at risk from the current prison rules, which allow male-born perpetrators of sexual and physical violence against women into the female estate.

We continue to campaign to highlight the unfairness of allowing males to compete in women’s sports. Self-ID policies, left unchallenged, will destroy women’s sport. We will not let that happen.

You can help us by following our campaigns and sharing the work we do. The work we do is carried out by volunteers and we are totally reliant on public donations. Please consider supporting our work with a small regular monthly donation. As our track record shows, every penny raised is put to good use and delivers results.

Thank you from us all at the Fair Play For Women team! 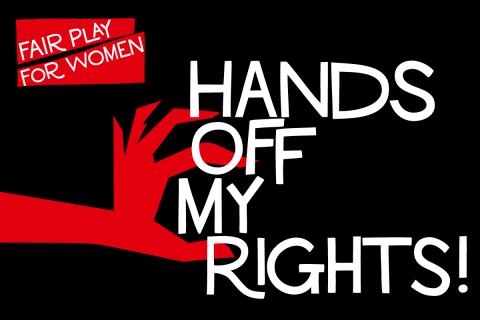 Read about the latest developments in UK proposals for GRA Reform