You are here: Home / Judicial Review / Grassroots feminists who helped clarify ‘sex’ in Scots law left to foot the bill by Scottish Government.

Two recent rulings by the Inner House of the Court of Session in Scotland have clarified the importance of “biological sex” in Scots law.

The appeal case brought by Fair Play For Women (FPFW) sought to overturn an earlier judgment that allowed people to self-identity their ‘sex’ in Scotland’s 2022 Census. The court decided that a rigid definition based on “biological sex” would not be appropriate for the Census. However, the court was clear that a definition based on biological sex “must” be adopted wherever it “concerns status or important rights”.

An Appeal case brought by For Women Scotland (FWS) had confirmed just days before that the Equality Act 2010’s protected characteristic of ‘sex’ was one of these contexts, where provisions in favour of women “by definition exclude those who are biologically male”

Fair Play For Women is now calling for Scottish Government guidance for public bodies to be revised. The current guidance, published in Sept 2021, cautions public bodies that collecting data on “biological sex” would only be necessary in a “small number of instances”.

“These two judgments put beyond doubt that public bodies need to collect data on biological sex in order to be able to carry out their statutory duties under the Equality Act 2010. The Scottish Government’s advice to public bodies is now out of step with Scot law and must be revised”.

Despite the legal challenge clarifying the meaning of “sex” in law feminists will be left with a hefty bill to pay.

Fair Play For Women lost its argument in court that Scottish Government advice allowing people to self-identify their sex in the Census was unlawful because it “sanctioned” the unlawful act of providing a “false” answer. The appeal court rejected this claim, instead agreeing with the first stance ruling that that advice was not unlawful because “an answer provided in good faith and on reasonable grounds would not be a false answer”.

“We lost the case on a technicality about the Census, but we won an important legal precedent about biological sex with wide ramifications for how Scots law must deal with issues of sex and gender in the future”

“In recent years, the words “sex” and “gender” have been used interchangeably in legislation without clear definitions. This ambiguity has muddied the water making it necessary for courts to decide what words do and do not mean. But courts can only do this when people, like us, bring cases to them. It’s not fair that members of the public must carry all the financial risk to sort out a mess not of their making”.

“Every party in this legal challenge was funded by Scottish taxpayers, except us. That includes the Scottish Government lawyers, the Equality Network who acted as intervenors supporting the government and their legal team Just Rights Scotland. But its us left to foot the bill”.

Fair Play For Women is now awaiting to find out what it now owes the Scottish Government. Both sides legal costs are expected to run in excess of £150,000.

“This was a David and Goliath fight that was needed to clarify Scots law. I hope the Scottish Government decides the only fair way forward is to settle its own legal bill and not pursue costs from a small grassroots women’s group and our supporters”

“That it has taken grassroots organisations, reliant on crowdfunding, to hold the Scottish Government to account – to argue in the Courts that sex discrimination still exists and that collecting reliable data on sex matters – is extraordinary and shameful. It should be a wake-up call to regulatory bodies, policy-makers and academics” 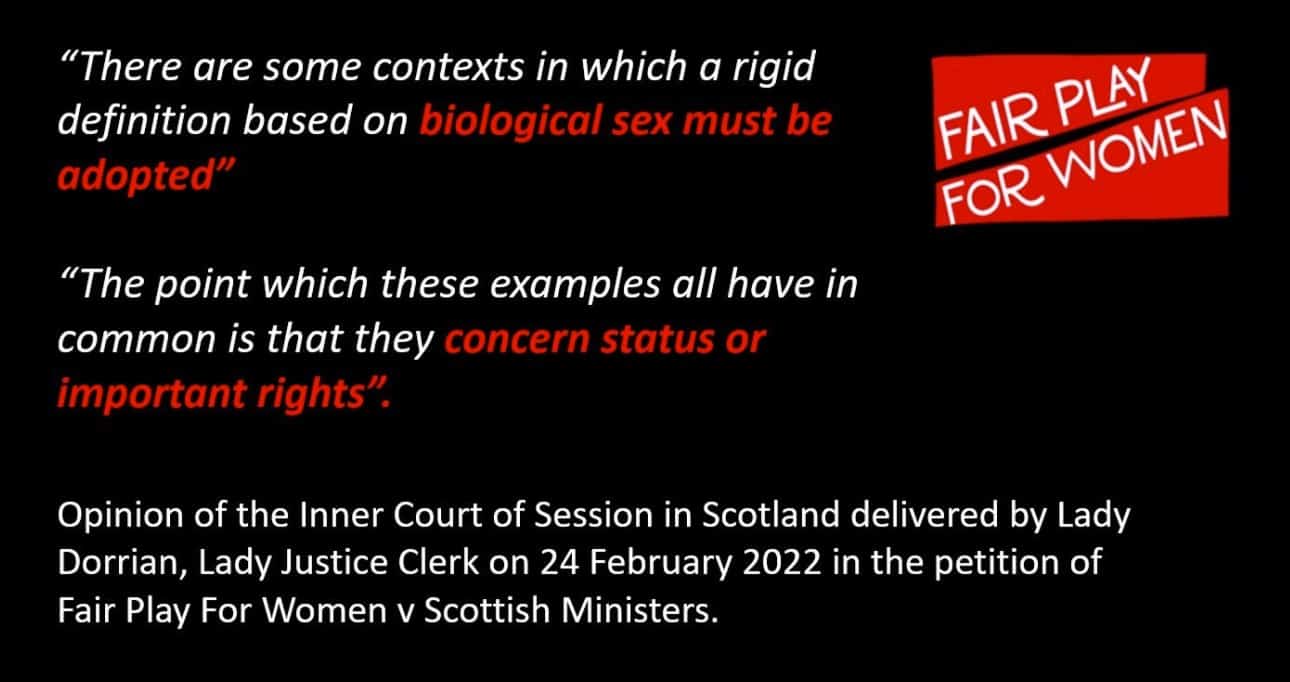 Paragraph 21 Opinion of Inner Court of session FPFW v Scottish Ministers “There are some contexts in which a rigid definition based on biological sex must be adopted” “The point which these examples all have in common is that they concern status or important rights”.

Paragraph 36 Opinion of Inner Court of session FWS v Scottish Ministers “….a protected characteristic of sex, is limited to allowing provision to be made in respect of a “female of any age”. Provisions in favour of women, in this context, by definition exclude those who are biologically male.

Scottish Census Appeal: Help us reclaim the definition of “sex” in Scotland.