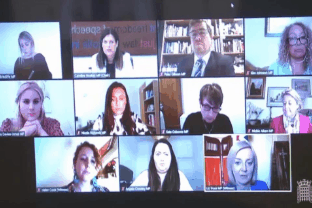 “We’ve been doing a lot of work internally, making sure we’re in a position to respond to that consultation and launch what we propose to do on the future of the Gender Recognition Act. We will be in a position to do that by the summer, and there are three very important principles that I will be putting place”.

“First of all, the protection of single-sex spaces, which is extremely important. Secondly making sure that transgender adults are free to live their lives as they wish without fear of persecution, whilst maintaining the proper checks and balances in the system”

Many women’s rights organisations have responded positively to the news. This is the open letter from one of our supporters.

As a solicitor who has represented thousands of women and used the Equality Act 2010 from the moment it came into force, I am glad to hear that single sex spaces are top priority in reforming the Gender Recognition Act. Single sex spaces are where women’s rights are vital and providing these spaces should be everyday, routine and uncontroversial. This is an issue affecting children and the elderly; from a girl having her first bra fitted, to an overnight stay in hospital, to group therapy, rape crisis supporter even just a weekly keep-fit class.

It is reassuring that the Government supports a woman’s rights to request and expect privacy from the opposite sex whether or not someone has a Gender Recognition Certificate. Private citizens should be confident that all single sex spaces are provided on the basis of sex not gender. The concept of single sex has been misunderstood to the extent that it is now necessary to review whether single sex spaces are working properly.

The Government must uphold a woman’s individual right to object or withhold consent to being forced to share private spaces such as changing rooms. Gender Recognition must not erode that right. I hope that you can help make women’s basic rights visible, simple and straight-forward again.

I believe that any reform must correct the EHRC Code which is, in my view, the cause of much misunderstanding regarding how single sex spaces can be provided. I have briefed Scottish Parliament on this topic and would be delighted to unpack the issues for you if this would be of assistance. I enclose a copy of my Briefing Note and also my shorter article for Scottish Legal News which outlines the problem.

We organised a campaign so that Liz Truss MP received thousands of emails thanking her for recognising women’s need for single-sex spaces and services, and for pledging to protect those in law.