You are here: Home / GRA consultation / Women Uniting call on the government: Protect our sex-based rights 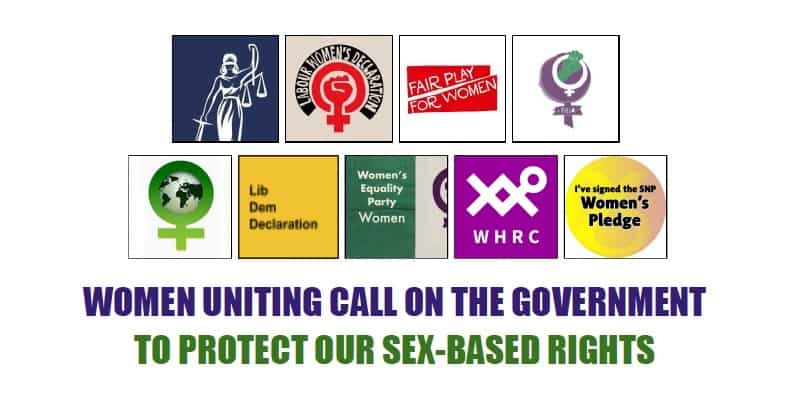 We are very pleased to sign this letter to Liz Truss, Minister for Women and Equalities.

We are very pleased that you have announced that any reform to the Gender Recognition Act will protect single sex spaces.

Single sex spaces are part of every day life for men and women, boys and girls – wherever they need to wash, undress and undertake bodily functions in privacy. This includes in school, college and universities, leisure facilities and parks, shopping centres and workplaces. Single sex spaces also include more specialist services such as women’s refuges, hospital wards, and mental health facilities.

While social distancing has meant that much of this shared world is currently out of bounds, we will return to life together.

Everyday single sex spaces are particularly important for women and girls. The question about whether a space is single sex or mixed sex shouldn’t be ambiguous to customers or to staff. Everyone deserves peace of mind, and to be treated with respect.

Clarity about single sex spaces is crucial for individual dignity, and opportunity as it ensures that people of both sexes and people of all religions, and ages are able to access work, education and leisure opportunities which would not be available to them if they could not undress without assurance of not being overlooked by members of the opposite sex. People receiving intimate care in elderly care homes should be able to know and acknowledge the sex of their carers.

The aim of the Gender Recognition Act 2004 was to enable a person who has chosen to live permanently as if they were the opposite sex to be able to have a degree of privacy. It was developed following a ruling of the European Court of Human Rights (Goodwin v UK [2002]) where it was found that it was a breach of Human Rights Article 8 (respect for private and family life) for a post operative transsexual to have to reveal their biological sex by showing their birth certificate to apply for insurance, mortgages and pensions.

The ruling did not require that anyone be allowed to share intimate spaces with members of the opposite sex without their consent, whether they had or hadn’t had medical treatment or surgery. Everyone has a right to respect for private and family life which includes bodily
privacy.

Single sex services are provided for by the Equality Act in several different circumstances, such as different needs and efficiency. One of the most common reasons for single sex spaces is ordinary bodily privacy as set out in Schedule 3, paragraph 27 (6): circumstances where a person of one sex might reasonably object to the presence of a person of the opposite sex.

This covers everyday situations such as showers, changing rooms and toilets. Such single sex spaces are widely provided but service providers have become nervous of saying clearly that they are single sex; leaving it ambiguous, or believing they must be ‘inclusive’ based on gender identity. Even worse, some service providers treat someone who reasonably objects to being surprised, confused or upset to find a member of the opposite sex in a ‘single sex’ space with them as hostile.

Instead of this, unisex and single-user alternatives are a straight-forward solution for accommodating anyone who doesn’t want to use single sex spaces with their own sex (without invading anyone’s privacy by enquiring whether they have had intimate surgery or not). This is helpful for transgender people (including those who identify as non-binary) as well as parents with children of the opposite sex. It protects everyone’s dignity and privacy.

We are writing to you as groups of women organising, from across all political parties and none. We hope you will be able to build cross-party consensus on this area where clarity and respect is needed for all service users as well as front-line staff.

We will be writing to you separately in the coming days with further thoughts on reform of the GRA and single sex spaces.