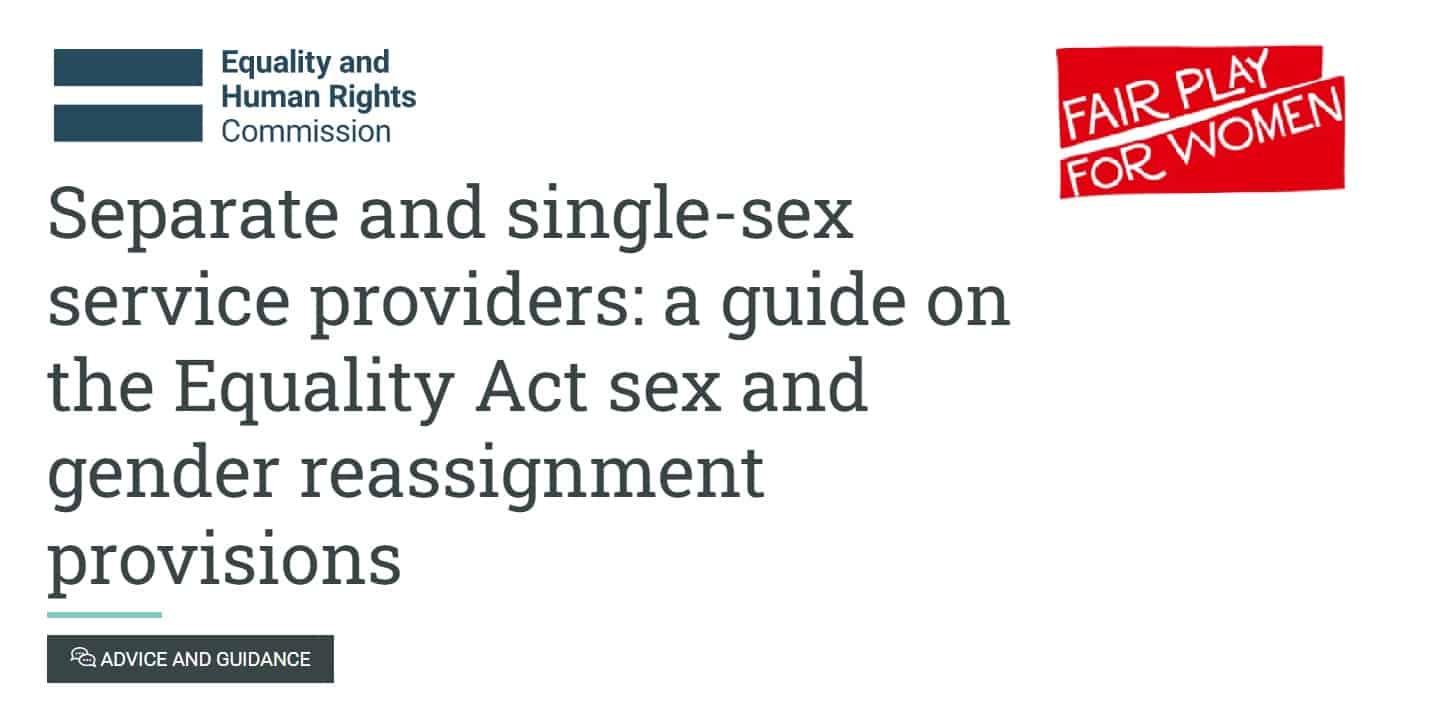 On 4th April 2022 the Equality and Human Rights Commission published its long-awaited practical guidance to providers of single- and separate-sex services.

The guidance confirms that there are circumstances where a lawfully-established separate or single-sex service provider can prevent, limit or modify trans people’s access to the service. For such a policy to be lawful it must be a “proportionate means of achieving a legitimate aim“. The EHRC confirmed that a legitimate aim could be for reasons of privacy, decency, to prevent trauma or to ensure health and safety.

The guidance includes a number of practical examples and emphasises the need to “balance the different interests and needs” of all service users, including those of women. The EHRC’s view is that a policy is likely to be lawful if the impact on trans people of exclusion is outweighed by the impact on the other users if they were included.

On the same day the EHRC published its guidance, Karon Monaghan QC published a thread on twitter about the EHRC’s guidance. She concluded the guidance “faithfully reflects the law“.

Karon Monaghan QC is a barrister at Matrix Chambers and principally specialises in equality and human rights law. She literally wrote the book on Equality law (Monaghan on Equality Law) and is an A Panel member of the Equality and Human Rights Commission Panel of Preferred Counsel. The Monaghan thread is therefore a valuable contribution towards public understanding and a useful accompaniment to the EHRC guidance for service providers.

You can read the original twitter thread here. We have also assembled the full text below, with sub-headings in bold, for easy reading.

EHRC SSS Guidance:
Given the discussion that has followed the publication of the EHRC’s guidance on single sex spaces & services (SSS), I thought it would be helpful to set out what the Equality Act (EA) says.

This is a (long) thread on what the law IS. Some will think the law should not be as it is. The answer to that is to seek to change the law, not to seek – even innocently, inadvertently & in good faith – to present an erroneous account of the law. It helps no one: those who want law change need to understand what the law currently is, & those seeking to operate SSSs need clarity.

Some basic concepts for those not familiar with the EA (many on here will be):

The protected characteristic of sex:

The protected characteristic of Gender Reassignment:

A trans person (the EA uses the term ‘transsexual’) is a person who is ‘proposing to undergo, is undergoing or has undergone a process (or part of a process) for the purpose of reassigning the person’s sex by changing physiological or other attributes of sex’ (s.7) (‘GR’). The concept of GR under the EA is predicated on a binary concept of sex (‘reassigning the person’s sex’) & does not protect eg. non-binary or gender fluid people (the non-binding decision in Taylor v Jaguar is wrong). The meaning given to GR is wide – covering people who have not yet begun the process of transitioning as well as those who have completed it.

Ss.13 and 19 define direct & indirect discrimination respectively, and they cover both sex & GR. These forms of discrimination are made unlawful in some contexts (eg employment, services).

Direct discrimination occurs where a person is subject to less favourable treatment because of sex or GR.

Indirect discrimination occurs where a body applies a provision, criterion or practice (PCP) to everyone within a relevant cohort that disadvantages a particular class, where that PCP is not justified.

Direct discrimination on the grounds of sex:

SSSs will of necessity be directly discriminatory as against the excluded sex (exceptions are conceivable but ignored for present purposes). However, a SSS is permitted where it pursues a legitimate aim & is proportionate (Sch.3 Pt 7).

In the case of women’s SSSs (I use these- and trans women (TW) – as the paradigm since that is where the controversy lies), legitimate aims might be privacy, dignity, prevention of trauma, distress etc. Whether excluding men from women’s SSSs is a proportionate means of achieving a legitimate aim, will require that the impact of exclusion on women & alternately men is weighed & balanced.

Women only refuges, sexual trauma services, communal changing rooms, toilets, intimate services, breastfeeding support groups, for example, will pursue one or more of the legitimate aims mentioned & will most likely be proportionate given the impact on women of admitting men.

A trans woman (TW) without a GRC is legally male & so is not legally entitled to use women’s SSSs – so excluding a TW without a GRC from a women’s only SSS will ordinarily be lawful.

Indirect discrimination on the grounds of Gender Reassignment

There may be circumstances where a rule (PCP) excluding TWs from a women’s SSS will be indirectly discriminatory (because as a subset of those who are legally male they might be particularly disadvantaged esp. if the only alternative is to use a male SSS).

This will not always be the case (eg a TW may not yet have started transition; there are separate, gender-neutral facilities routinely used by both sexes) but where it is, excluding a TW without a GRC must pursue a legitimate aim & be proportionate if it is to be lawful.

Direct discrimination on the grounds of Gender Reassignment

TW with GRCs are treated in law as women but can be excluded from a women’s SSS where to do so pursues a legitimate aim & is proportionate (Sch 3, para 28).

Legitimate and proportionate:
On legitimate aims & proportionality & the exclusion of TW, the considerations above are likely to apply (privacy, dignity, prevention of trauma, distress) but the specific impact on TWs will have to be particularly weighed & put in the balance.

(i) the needs of all users;

(ii) the fact that TW may be at different stages in transition (offensive suggestions re: checking genitals or ‘passing’ have no place, but a SSS can take general account of the fact that among TW, some will not have commenced transition at all but intend to do so in future, some will be at an early stage & even where they have completed their transition may be male bodied);

(iii) the question whether TWs can realistically access another service with dignity;

(iv) the fact that women are not homogenous – some will be relaxed about sharing SSSs with TWs; some will have a history of sexual abuse/VAWG & will be traumatised by a male bodied person in protective/intimate spaces; some will be from religious minorities that will be effectively barred from certain SSSs if TW are admitted (and so may be subject to indirect religious discrimination themselves).

INCLUSION OR EXCLUSION OF TW:

Generally, the exclusion of TWs from women’s refuges, sexual trauma services (see the Explanatory Notes), communal changing rooms where women will be in a state of undress, intimate services (eg waxing), for example, is likely to be lawful as pursuing one or more of the legitimate aims and proportionate. In every case the impact on TW will need to be considered, treated seriously & properly put in the balance.

When undertaking this exercise, it should be borne in mind that it is unthinking & unempathetic to stigmatise those women for whom the presence of TW in limited private, secure, & supportive women-only spaces will be disturbing or even distressing, as transphobic.

It goes without saying that in relation to some SSSs, even where it is lawful to exclude men, it will not be proportionate to exclude TW. The above deals with the areas that have proved controversial.

FLASH POINTS IN THE DEBATE:

There seem to be particular flash points atm:

(i) What is a woman?: See above. It may be controversial, but it is not complicated

(ii) Toilets: The test for determining whether excluding TW from SSS toilets is lawful is the same as above – legitimate aim & proportionality. The potentially profound negative impact on TW (particularly at a late stage in their transition) of a requirement to use male toilets must be given particular weight – many TW would be deeply distressed at having to do so.

There may be circumstances where the needs of all groups can be readily accommodated (self-contained gender-neutral cubicles; third spaces); sometimes not. Ultimately, it will depend on context & the impact on all service users (where the toilets are used by staff, employers need to be mindful of H&S laws that deal with male & female toilets specifically).

(iii) Self-ID: [GRA REFORM] this will not by itself affect the above. Whatever the route to a GRC, & assuming the EA is not amended, the provisions above will apply with equal force.

Finally, the exceptions on SSS do not apply to harassment or victimisation – the law requires that dignity & respect are accorded to all; that is women as well as TWs.

The EHRC’s SSS Guidance, then, faithfully reflects the law.