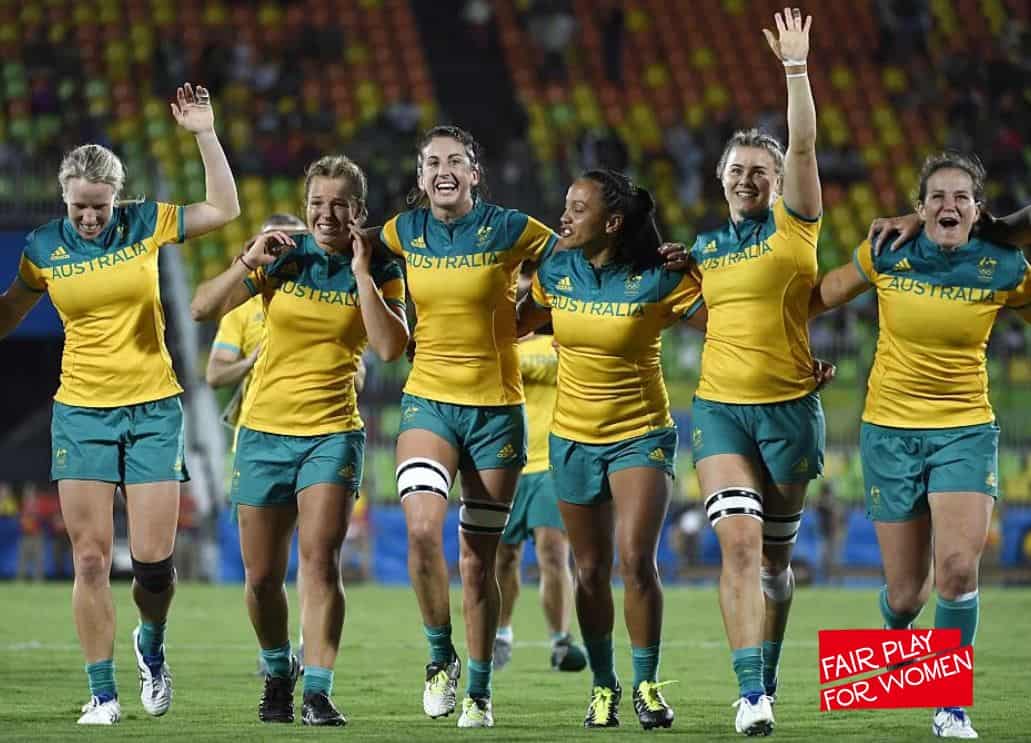 On 25th February 2020, for the first time in sport, leading independent experts, with differing views, were invited to share their expertise, opinions and research with a dedicated multi-disciplinary transgender participation working group.

Dr Nicola Williams, Director of Fair Play For Women was invited by World Rugby to present the case for why women and girls need a female-only sex category to uphold fairness and safety.

Here is the transcript of the talk. 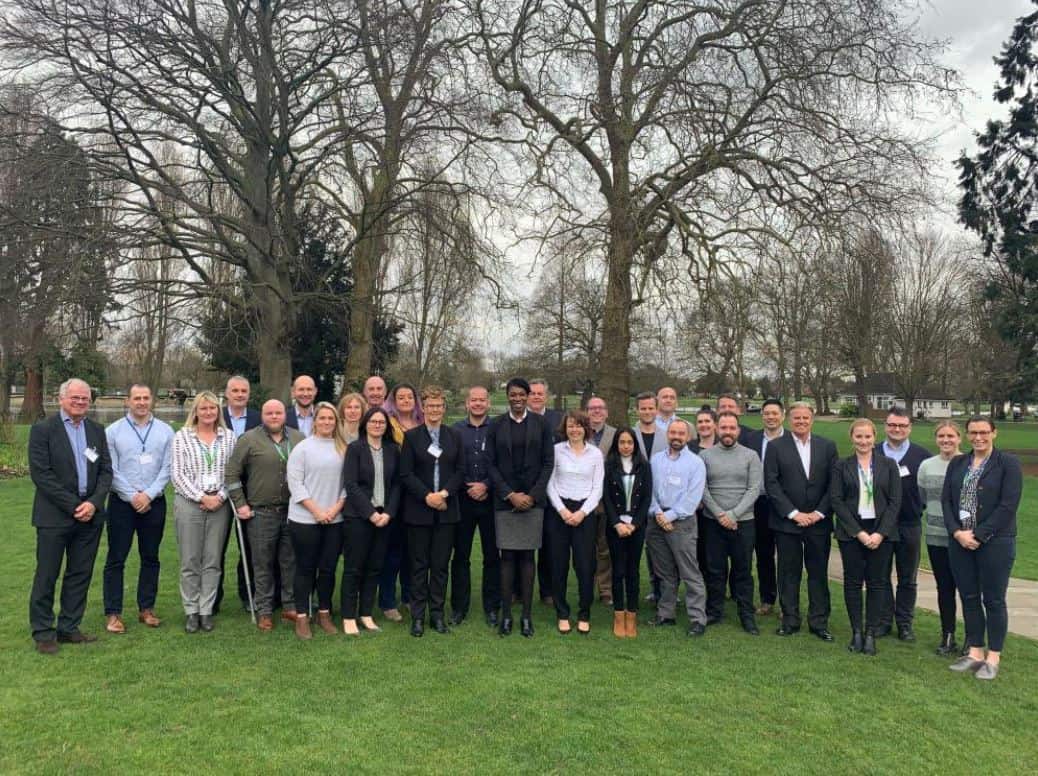 We’re all here today to talk about the eligibility rules for female sex category in Rugby.

Who gets to play in and against female Rugby teams matters to women.

That is why I’m glad to be here today and to have the opportunity to speak on behalf of the women and girls who play the sport.

And why they need World Rugby to set clear rules that ensure their sport remains safe, fair and accessible to them.

And this can only be guaranteed by restricting eligibility based on biological sex.

I’d like to start by reading this email sent to me from the mother of a teenage girl who plays Rugby.

“Two years ago Emily started playing at our local club. Its been wonderful to see how its boosted her fitness and self-esteem. She’s at last found the sport that suits her and one that she’s good at. But recently her enthusiasm has waned. A trans player called Alice has joined the team. Alice identifies as a woman but was born male.

Emily and Alice are friends off the pitch but Emily doesn’t think its fair that someone born male should be playing in the women’s team. It’s taken the fun out of the game for her and she doesn’t want to play anymore. She can’t say anything because she doesn’t want to hurt her friends feelings. Lots of the other young women feel the same way but they are all scared to say anything, even to their coach, in case they get called transphobic.

My daughter asked me why have the club let this happen when it’s so obvious to everyone its unfair and dangerous. I don’t know what to tell her”.

Since starting our public sports campaign we’ve heard many stories like this, from within many different sports and coming from many different levels.

It is becoming very clear that the current trans inclusion rules are not working for women and girls.

Women and girls make up 50% of the population but are still massively under represented in many sports.

Rugby Union is no different, and in fact it’s one of the worst. The game has only opened up to women very recently. Women’s rugby only gained Olympic recognition in 2006, a full one hundred years after the men’s game.

And women and girls are still massively under represented today.

At elite level, some of the best known Rugby playing nations like New Zealand, Wales and South Africa each have less than 5% of their registered players being female.

The worldwide figure has only just reached 25%.

So at a time when we should be growing the game to include more women and girls we are seeing new policies that risk decreasing numbers.

The female sex category is the single most effective mechanism we have to make Rugby Union accessible, fair and safe for women. We must get this right.

When it comes to inclusion of women and girls into sport the job’s not done and we mustn’t undo the little progress already made. 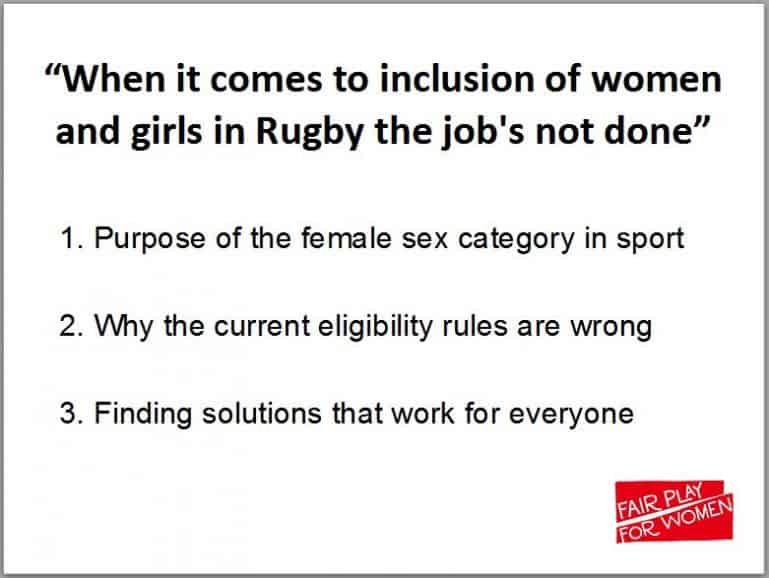 Why is this issue proving to be so controversial and difficult to resolve? Why are we all gathered here today?

It’s not to debate about whether ‘transwomen are women’.

It’s about defining the criteria for participating in the women’s game.

We are dealing with two very different concepts here.

Gender identity is someone’s sense of self and sex is about the body.

It’s perfectly possible to respect a trans persons gender identity AND to accept that transwoman were born male and that their body will have benefited from male puberty.

Most of the time someone’s sex doesn’t matter – and I am very happy to address transgender women as woman, to respect her gender identity and refer to her using feminine pronouns. We are all just people who deserve respect.

However, in some areas of life sex does matter – sport being one of the most obvious.

We don’t base a protected sport category on an athletes internal sense of identity. We base it on body types. 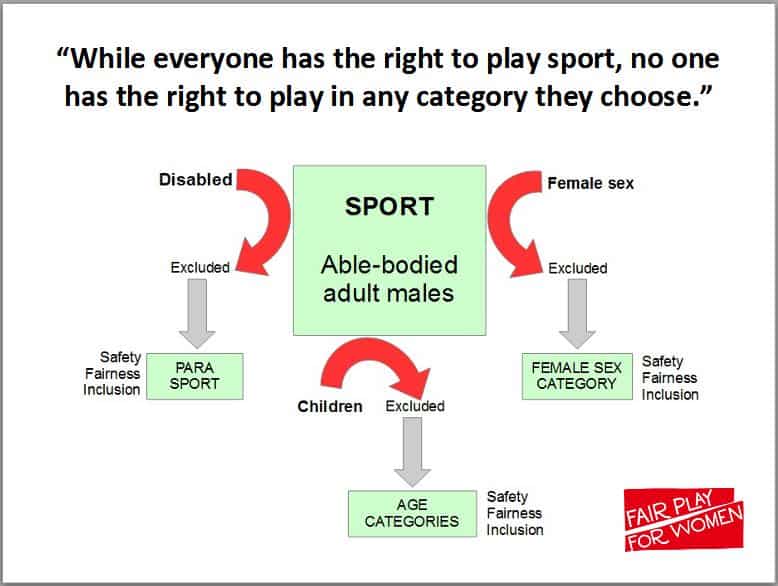 If you fall outside that ideal body-type you are disadvantaged.

We solve this problem by the use of sporting ‘categories’.

This is why we have separate categories for disabled people, for children and for women. Its to create a level playing field for each of these groups.

Categories mean we need eligibility criteria – who’s in and who’s out.

And we set eligibility criteria based on the characteristic or body type that’s relevant to the group we are trying to accommodate.

What’s important is that everyone has a category ‘that is fair and right for them’.

And the simple truth is that the female sex category is not fair or right for someone who has benefited from a male puberty. 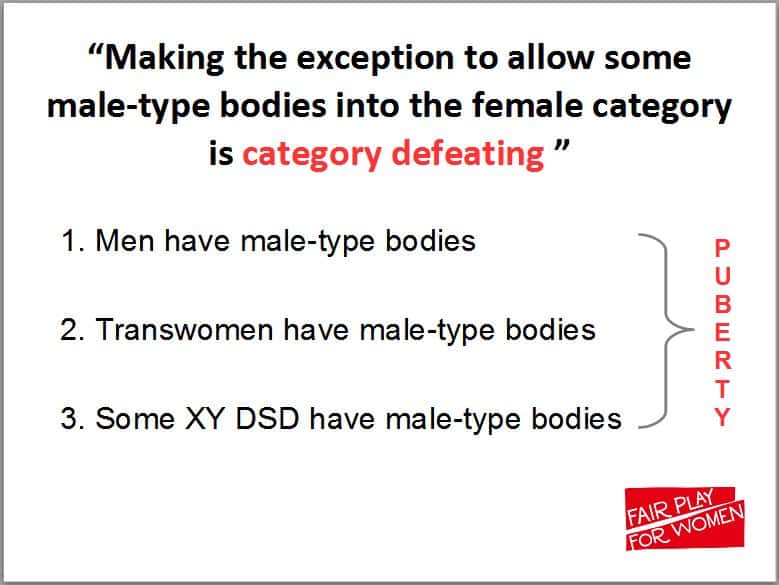 The female category serves a clear purpose. It’s needed because of the lifelong advantage gained exclusively by males during puberty.

Making an exception to allow some males into the female category is a ‘category defeating’ move.

Many different types of people have male-type bodies.

Some people with DSDs have male-type bodies.

These are three very different social groups. What they have in common is that they have all been through male-type puberty. 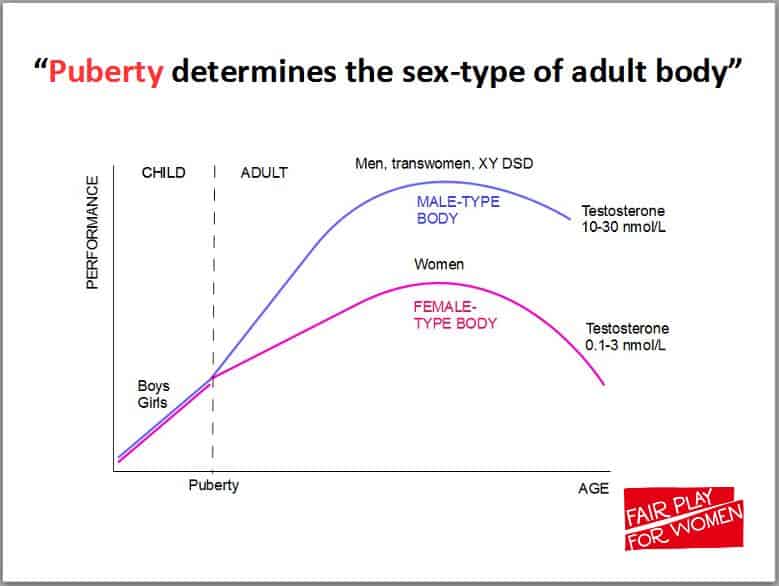 Everyone will be aware of the controversy over the 800m runner Caster Semenya. Caster is not transgender but the same principle about male-type puberty applies. So I want to use her case as an example.

World Athletics said she had an unfair advantage over the other women in her sport. The Court of Sport Arbitration agreed.

Caster has a XY male-type disorder of sexual development. She was raised as a girl but when she hit puberty it was a Testosterone driven male-type puberty. This gave her a sex-based advantage over her opponents.

Both CAS and World Athletics understood that sometimes it can be fair (and lawful) to discriminate against an individual for the purpose of maintaining fairness, safety and inclusion for the majority.

However, World Athletics then made a ‘category defeating’ mistake.

It was the same mistake the IOC made 5 years previously in 2015 in their transgender inclusion policy.

They made a leap of faith – with a rule that said male people can access the female sex category if they reduce their testosterone.

Yes, Testosterone is a good marker to distinguish between males and females but that’s all.

But testosterone levels in adulthood is not the driver of the performance gaps between males and females.

Testosterone did most of its work in the past at puberty to create lifelong and irreversible advantages exclusively for males.

Removing it later in adulthood won’t reverse all those gains.

‘Testosterone suppression’ offered the illusion of an easy solution to a difficult problem. But it was wrong and continues to be so.

Consequences of this mistake has been immense. All transgender inclusion policies have flowed from these IOC guidelines, including your own.

Sporting bodies at all levels of sport have blindly followed this concept with no assessment of the science or the impact on women on the ground.

That, combined with the sensitivity of the topic and the fear of being considered ‘transphobic’ for raising concerns means leadership from the top of the game is going to be vital to resolve this.

You can’t leave this to players and officials to just muddle through.

Again, let me share with you the sort of thing we are hearing from those on the front line: 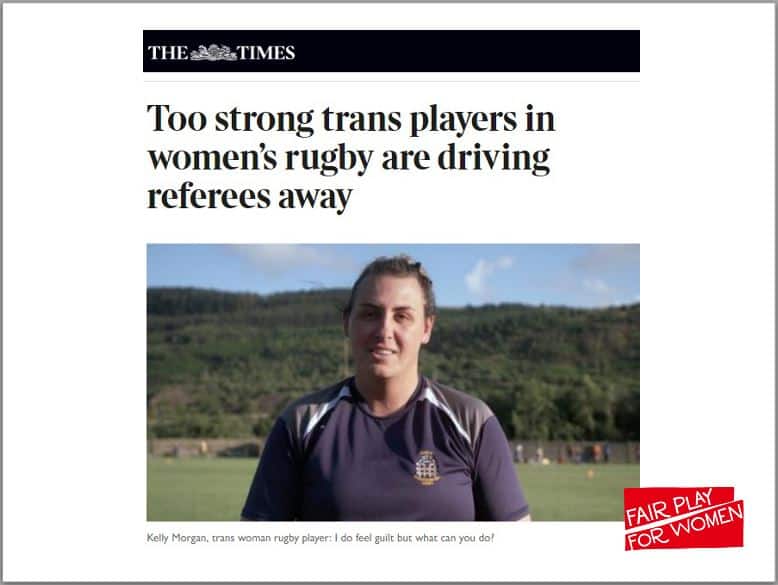 “being forced to prioritise hurt feelings over broken bones exposes me to personal litigation from female players who have been harmed by players who are biologically male. This is driving female players and referees out of the game.”

“I volunteer my time to officiate matches because I love my sport. But I won’t continue much longer if I have stay quiet about the unfairness I see on the pitch or risk abuse by getting called transphobic if I turned a player away”.

The chair of a Rugby club told me how the RFU are scrupulous when it comes to player safety with factors like age or kit. But they were shocked to find out “they must not to ask” if anyone suspects someone in the opposing team might have an advantage because they are transgender.  They must simply accept that all teams will be ‘complying with the rules’.

Players and coaches tell me they regularly turn up to women’s matches to find a transgender player on the other team.

A team captain was reported in one newspaper describing how her trans teammate “folded an opponent like a deckchair”.

We all worry about scrum safety and concussion in Rugby.

These are alarm bells we mustn’t ignore. 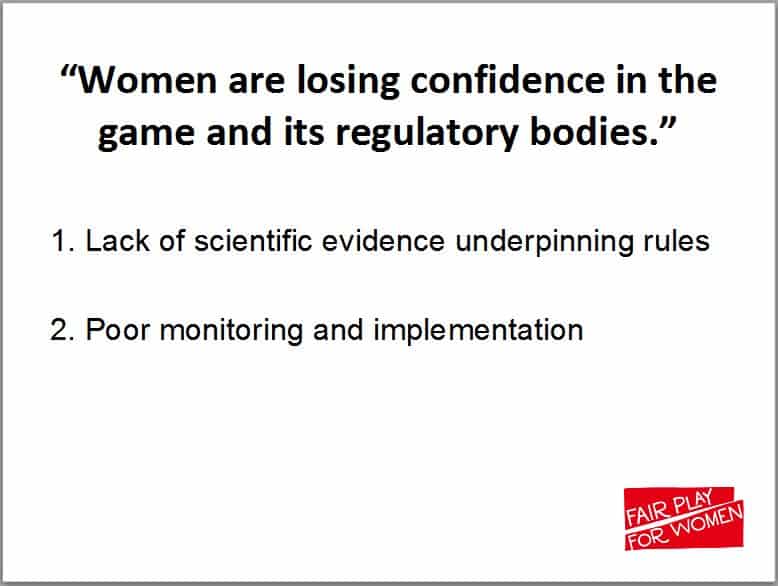 There are two reasons why rules based on testosterone suppression is wrong.

There’s no evidence that it works AND it’s virtually impossible to monitor or implement on the ground. Particularly at community level.

“At lower levels less stringent eligibility requirements may be imposed”. 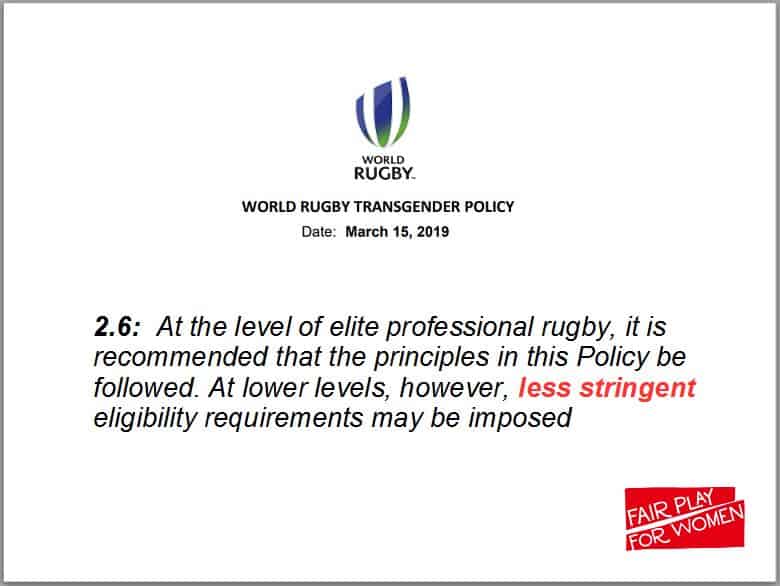 That’s dangerous and puts pressure on officials and frustrates players.

Some will say we only need strict rules at elite level. That’s wrong.

Community level is where most of the future concussions and neck breaks will happen.

Women are losing confidence in the game and its regulatory bodies.

And that undermines your efforts to grow and inspire players in women’s Rugby. 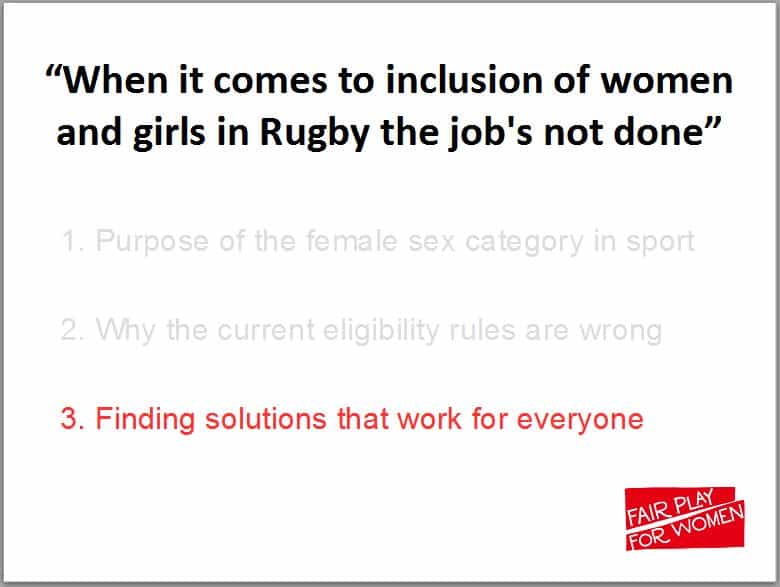 The transgender community is a hard to reach group when it comes to sport.

This is something World Rugby is good at. 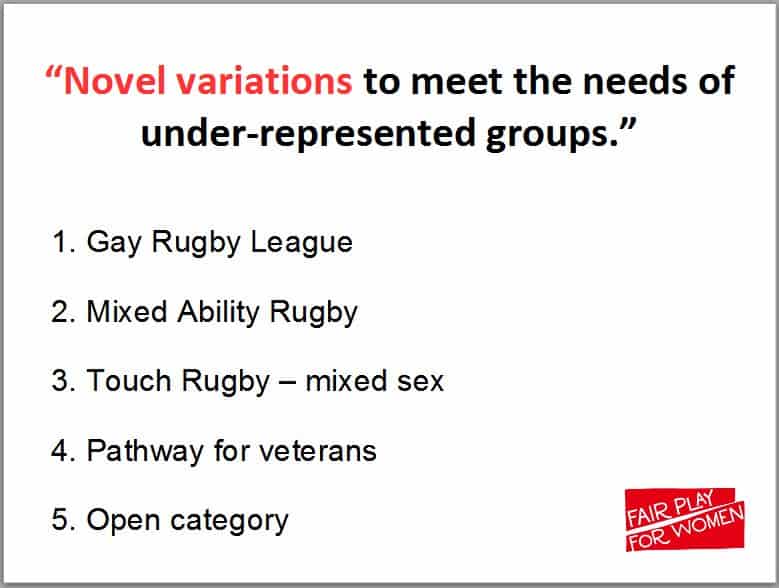 You have a thriving Gay Rugby league.

Touch Rugby can be mixed sex. But crucially, the performance gap between male and female players is acknowledged and incorporated into the rules.

These novel variations of the game have worked well at community level sport – which is where most people play the game and where future growth will happen.

Some sports operate an open category which anyone can enter. With protected categories running alongside for women and juniors.

This is because men have never needed a protected category of their own.

So maybe its the male sex category we need to open up for all gender identities, not the protected female category.

Yes that’s a social challenge – but we have tackled challenges like that before. Women had to fight against social attitudes to find their place in a ‘mans game’. Here you all are. Evidence of that success. It can be done.

Of course, I don’t have the answers here. You are the experts.

But the point I’m making here is that finding ways to bring hard to reach groups in society is not a new challenge.

But it has never been solved by including one group at the expense of another or ignoring the performance differences between two different groups. 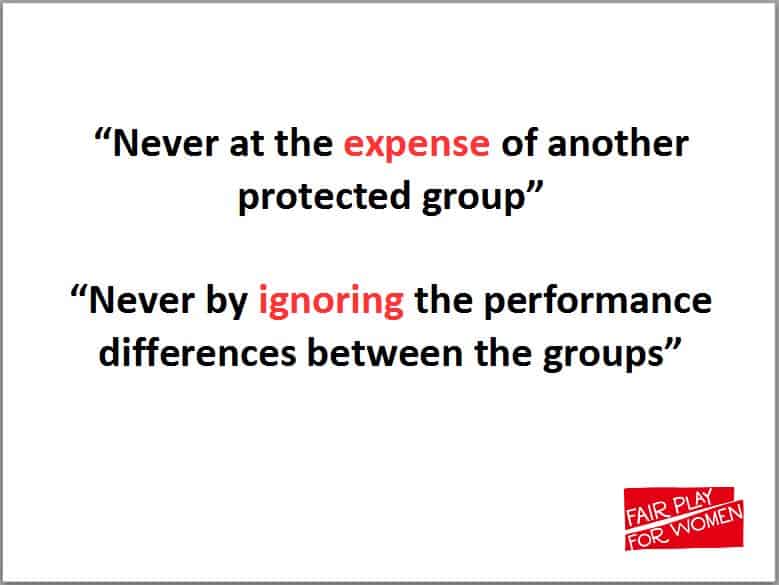 This is undoubtedly a difficult problem for World rugby to tackle – but you are not shirking it.

With today’s meeting you are breaking the mould.

I hope the leadership you are showing inspires other Sports federations to approach this with the same courage, transparency and rigour.

Inclusion is complex and rights must always be looked at as a whole to see the full picture.

Trans inclusion can’t be looked at in isolation.

World Rugby has an obligation to two under-represented groups here. Trans people AND to women.

Ignoring the sex performance difference between women and transwomen is dangerous, indefensible and unsustainable.

Continuing to ignore that difference makes the game of Rugby unsafe for women. Unfair for women. And will ultimately exclude women from their own game. 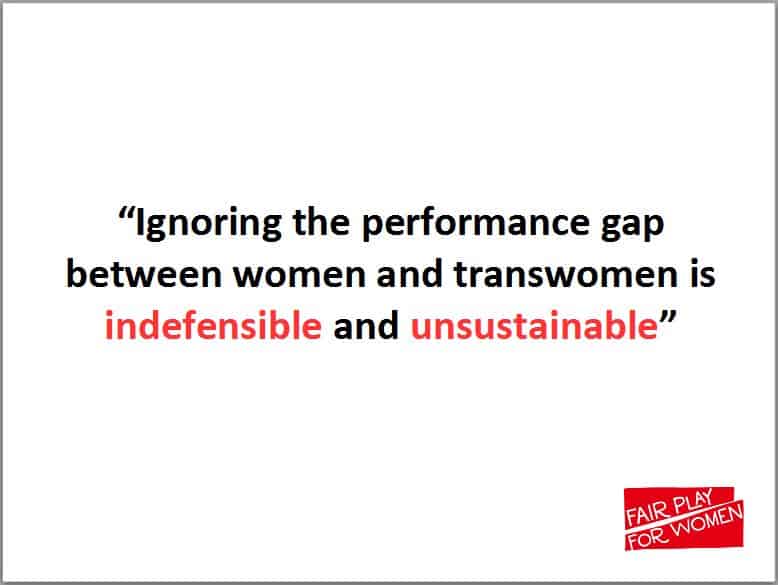