You are here: Home / Data / Women’s Health Strategy: our input to the consultation 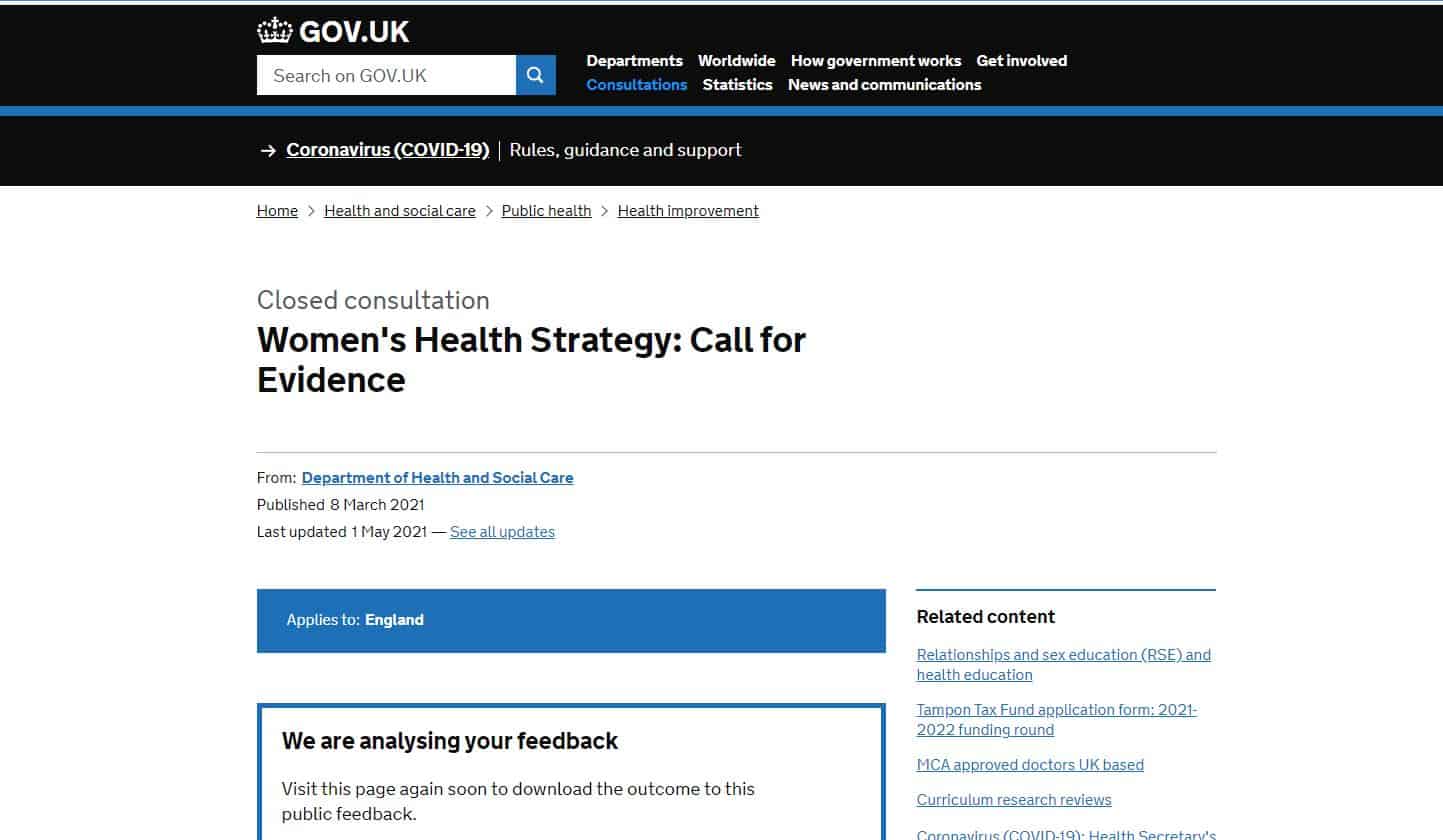 In March 2021 the Department for Health and Social care called for evidence to help develop its Women’s Health Strategy Fair Play For Women made this written submission.

Fair Play For Women Ltd is a campaigning and consultancy organisation which raises awareness, provides evidence and analysis and works to protect the sex-based rights of women and girls in the UK. Founded in 2017, our work is focused on understanding when and how gender-and sex-based rights conflict in law and policy-making. Our aim is to ensure that everyone’s needs are fairly balanced and that women and girls are not overlooked in good policy-making.

We welcome this consultation about women’s health, which recognises the material reality of sexed bodies, and the consequential differences between the sexes, both in their health issues and in their experiences in the healthcare and social care systems.

We share the concerns recently raised by the Office for Statistics Regulation that the conflation of sex and gender, which is already occurring, compromises statistics and hence information and understanding. This is particularly concerning in healthcare. The entire strategy relies on knowing the difference between males and females, and recording it correctly. Yet we know that this is not being done. This is now becoming urgent to address.

The conflation of biological sex with self-declared gender identity is also undermining the stated intention of the NHS to provide single-sex in-patient accommodation. This, and the impact on patient access to female HCPs on request, will not have a positive impact on women’s health, and may well have a negative impact.

Reversing the conflation of sex and gender identity in medical records and in practice for both patients and staff is therefore an essential and increasingly urgent foundational step for the government’s strategy on women’s health and care provision.

2.1 It is essential that birth sex and self-identified gender are not conflated in data collection and record-keeping.

2.3 No woman who requests a same-sex clinician or social care provider should be shamed for this; nor should a trans-identifying male be presented as a female to a woman who has requested a female HCP or a woman.

It is essential that birth sex and self-identified gender are not conflated in data collection and record-keeping. It becomes impossible to rely on and act upon data regarding the specific issues affecting women and girls if those data are distorted by males self-identifying into them, and being permitted to do so. Biological sex remains a critical variable for a wide range of applications.

In order to make progress on the development and execution of any strategy relating to women’s health, it is necessary to correctly record the sex of patients, participants in research studies and drug trials, and so on. If patient records are to be used for analysis, then ensuring correct recording of biological sex in NHS patient records is essential. But this is not being done. For example, we know there are very substantial differences in the incidence of some mental health issues between the sexes. But the latest planned changes to the Mental Health Services Data Set will replace sex with self-declared gender identity. This will destroy the value of these data for analysis of the differing mental health issues and outcomes for men and women, and for boys and girls.

Separately, the NHS inclusion of fields for both sex and “gender” in electronic patient records reflects their dual use: for medical reference by clinicians who need to know a person’s sex and by customer-facing medical staff who wish to address individuals according to customer preference. However, it is reportedly failing in practice because staff understand “gender” to be synonymous with “sex”, and are therefore recording data in one field only.

It is widely accepted that, for reasons of dignity and privacy, single-sex healthcare provision is often desirable. The value of single-sex wards is explained at length in the NHS England document, Delivering Same Sex Accommodation. But Annex B of this document undermines it entirely, since it declares that anyone may self-identify their sex and be accommodated by preferred gender, even if this is not their biological sex. Whilst this may be desirable for that patient, it results in all other patients finding themselves in mixed-sex accommodation while being assured it is same-sex. This has resulted in distressing experiences for women in hospital, such as those who had a male alongside them viewing images of child sex abuse (behaviour which is vanishingly rare among females), or the woman fearful of men being told she was with women only in a mental health unit despite the evidence of her own eyes. Whether someone has a GRC is not visible to others. Whether they were born male or female invariably is. But in any case the current policy allows anyone to declare themselves as female, regardless of whether they have changed their sex legally.

The NHS recognises that some women prefer intimate healthcare procedures to be provided by a female doctor or nurse. Similarly, in social care it is widely accepted that many people will prefer same-sex carers. There are many reasons why a woman may request a female HCP, including a history of assault or associated trauma, religious or cultural taboos, or sensitivity about their body. Losing confidence that such a request will be met can only be detrimental to women’s experiences in the healthcare system, and may lead to reluctance to come forward for screening, for example.

Simply asserting that anyone who identifies as a woman is a woman does not work in situations where there is hands-on contact between healthcare or social care provider and patient. While most of us might struggle to define what makes a person male or female, the ability to distinguish between the sexes is acquired early in childhood and appears to be instinctive and highly accurate. It does not rely on sight of birth records or intimate body parts.  It exists even if it is not recorded.

This matters for the privacy and dignity of men and women alike, but it is particularly of concern for women because of the fear of sexual assault (sexual assault by women is very rare, less than 2% of UK convictions). Indeed, some women may experience contact by a male as an assault, particularly if she has requested a female practitioner. Yet women who make such a request are being demonised.

There is a clear conflict of interest between the wish of a doctor who seeks gender reassignment for recognition in their new gender and those of that doctor’s patients who request a same-sex clinician. The GMC practice of allowing doctors to change their registered sex on request respects the privacy of the clinician, but this may create difficulties for patients who expect a female clinician but see someone whom they perceive as male. This conflict needs to be acknowledged and addressed in ways that work for women as well as for HCPs. Even in cases where a doctor is known to have changed gender, and appears to be accepted, as in this example of an Asian doctor and many patients from the Indian sub-continent, it is possible that some patients will not feel able to refuse to validate the doctor’s preferences. As Nadine Dorries has pointed out, many women are not assertive with doctors as they feel they must defer to the doctor. This effect is likely to be amplified in those cultures where males are higher status than women. Therefore, the system needs to ensure that access to same-sex HCPs does not rely on women being sufficiently assertive or risking causing offence to a respected practitioner, but is fully legitimised and respected by everyone working within the health and care systems.