You are here: Home / Judicial Review / Who’s behind the government losing sight of reality? 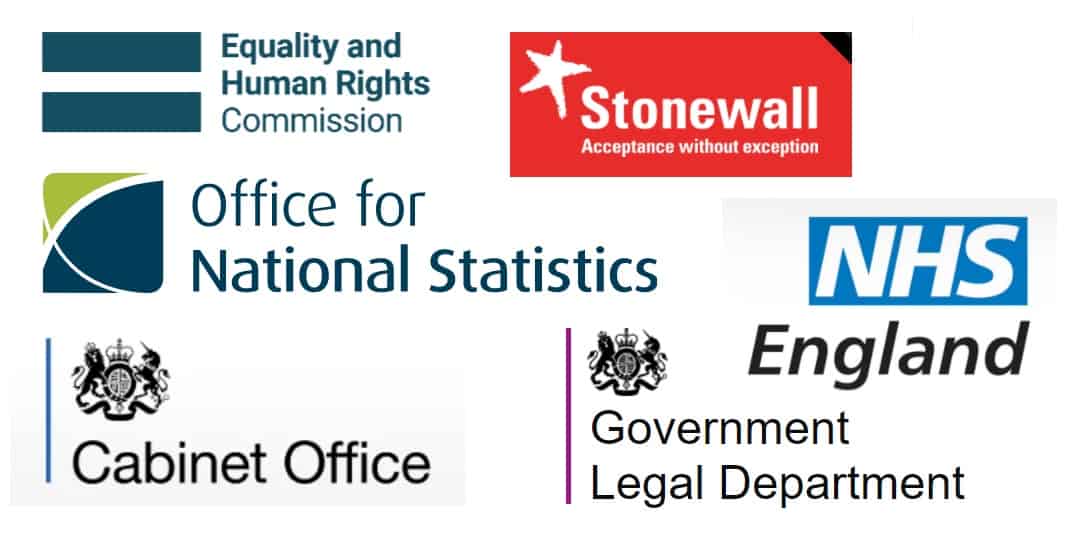 Government departments have questions to answer over the Census debacle. It wasn’t just the ONS. The Equality and Human Right Commission and NHS England both supported some version of self-identified sex for the sex question in the Census. The Cabinet Office submitted a witness statement defending the ONS approach and opposing our claim.

On Sunday 14th March on the BBC we heard Sir Ian Diamond, Head of ONS say:

“It’s a very simple question. What is your sex.”

But, just days before, the ONS had been in the High Court defending its position that sex should be self-identified in the Census. A policy position they later conceded was unlawful and were ordered to change.

In Court the ONS was telling us it wasn’t a simple question at all. First treasury Counsel Sir James Eadie QC was arguing that sex was an “umbrella concept” and such a “difficult question” that without guidance some people would be unable to answer it. He argued there were “5 concepts of sex” and that the definition of sex wasn’t “hermetically sealed”.

Despite this apparent complexity ONS was arguing that the case should be thrown out by the judge because the definition of sex didn’t really matter to anyone anyway.

“It is submitted that the point of law raised in these proceedings is not one of general public importance; and that the public interest does not require it to be resolved.”

How did this happen?

So how have we got to the point where “a very simple question” that has been asked since 1801 is now considered too “difficult” for people to answer without Guidance?

It is because Stonewall, a powerful LGBT pressure group, says it is. Not content with new questions in the Census on gender identity and sexual orientation, Stonewall muscled its way in as a stakeholder for the sex question too; the question women and girls rely on to monitor and understand sex-based inequalities.

Stonewall welcomed the “clear and inclusive guidance on how to answer the Census sex question” announced by the ONS on 12th February. Inclusive of gender identity that is. Guidance that muddles sex and gender identity is not clear and it’s not useful for women and girls.

Almost a year earlier, in March 2020 while meeting ONS to discuss the new gender identity and sexual orientation questions, freedom of information requests now reveal Stonewall had made its position on the sex question very clear. It wanted Sex Self-ID.

Following Freedom of Information requests, it can now be revealed that before a roundtable to hear the views of ALL stakeholders Stonewall gave ONS this advice:

Stonewall: “I’d strongly recommend that careful thought is applied to how the ONS can practically ensure that, depending on who is present at the roundtable, this is not a hostile environment for trans attendees”

To which the ONS dutifully agreed and offered Stonewall a private meeting ahead of the roundtable to hear more of their thoughts and concerns:

ONS staff member: “I fully empathise with your words that ensuring that a hostile environment is not created and I can reassure you that ONS will consider very carefully how the meeting will be conducted.  I will also arrange from a colleague to take a call with yourself ahead of this event to run through your thoughts or any concerns you may have.”

The following day all 20 attendees were informed by email that they would be allocated just 3 minutes each to briefly outline their position in turn. At the roundtable there was no “discussion” or free exchange of ideas among stakeholders.

ONS is a Stonewall champion.

In March 2021 a Freedom of Information request was made for any correspondence between ONS and Stonewall “relating to conditions the ONS was expected to fulfil, including policies the ONS was advised it was required to change, in order to meet any standards set by Stonewall”. ONS, the public body we trust with data, has, it says, lost all correspondence due to “staff changes”.

“The ONS last made a submission to the Stonewall Workplace Equality Index during 2018. We do not hold a record of the submission due to staff changes since then. The ONS does not hold any correspondence that relates to conditions the organisation was expected to fulfil or any policies the ONS was required to change to meet any standards”.

This biased approach, divorced from reality, is now deeply embedded in our public institutions.

Stonewall is a political lobby group and it has a clear and straightforward ideological agenda that gender identity should override sex in law and policy. Lobby groups lobby. That’s what it does.

The real problem is that the Stonewall agenda has now become embedded deep within organisations. The ONS was not alone thinking that “What is your sex?” is problematic and needs redefining. The unlawful guidance was advised and supported by many other public bodies.

Cabinet Office (No10) is the government department responsible for the Census. They were an ‘interested party’ and so also submitted their own summary of grounds for contesting our claim against the ONS. The minister for the Cabinet office (Michael Gove) sent a QC from the Government Legal Department (GLD) to attend the hearing on his behalf. The GLD also defended the ONS in court using its top QC, First Treasury Counsel. They brought the big guns out to defend this case.

In a written statement to court the Minister said that he:

“recognises that “sex” as a concept is undefined in the Census legislation, and that there is nothing in the Census legislation to confine its meaning to that of sex at birth or sex recorded on a gender recognition certificate. Should permission be granted, the Minister will consider whether it is necessary for him to play an active role in the litigation and, if so, will lodge detailed grounds”.

“The Minister opposes the application for interim relief”.

The GLD and the Cabinet Office are both Stonewall Champions. 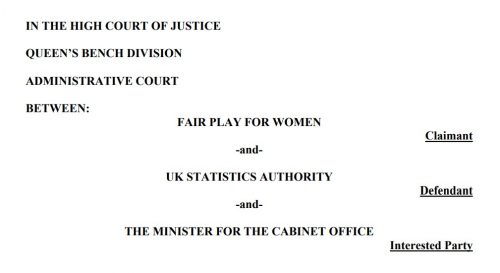 The Equality and Human Rights Commission supported the unlawful guidance.

The EHRC agreed that sex should be self-identified in the Census. This is the public body charged with defending all nine protected characteristics in the Equality Act 2010, including sex.

But at a roundtable meeting of stakeholders on 24th June attended by Fair Play For Women the Head of Research at EHRC said that “the guidance accompanying the sex question should allow people to self-identify their gender and should not be based on someone’s legal sex status”.

“I’m concerned about the guidance referring to a legal definition of sex. Concerned that it might be misunderstood and be seen that we are making the sex question into a legally-defined sex question which I think would be counter-productive.”

We wrote to the CEO of EHRC after the meeting, asking her to confirm that this was indeed EHRC’s official position. It was confirmed that it was.

EHRC is a Stonewall champion.

You might think that if there is one place where biology matters, it is in healthcare. Think again. The LGBT lead Michael Brady for NHS England was also at the June 2020 roundtable meeting of stakeholders, and also endorsed “lived sex” rather than birth sex or even legal sex as the basis for answering the census question, what is your sex?

NHS England is a Stonewall champion.