You are here: Home / Children / Is your child transgender, gay or neither?

Gender non-conforming behaviours are very common in young children. Societal and peer pressure pushes children more towards gender conformity as they get older. However, it is not abnormal or unusual for a child to like playing with toys and wearing clothes which are associated with the opposite sex. It is also not uncommon for such children to insist that they actually are the opposite sex although most simply grow out of it.

Gender non-conforming behaviours are also observed in children with gender dysphoria and so more recently have also been used as indicators of a transgender identity.

This complex picture makes it very difficult for parents and their children with gender issues to know if they are perhaps transgender or instead simply on their way to growing up into a gay adult or indeed neither. This has serious implications when medical or psychological interventions are being considered at a young age. This page discusses the current scientific evidence in this area and its implications for how we best support children as both their gender and sexual identities develop.

There is a large number of retrospective studies (60) consistently showing that lesbian women and gay men recall significantly more gender non-conforming behaviours in childhood compared to their heterosexual counterparts. This year a large population-based longitudinal study powerfully demonstrated how gender non-conforming behaviours seen as young as 2.5 – 4.5 years old are highly predictive of homosexuality later in life.

This study looked at gender non-conforming behaviours observed and recorded by parents between the ages of 2.5 and 5 years old. The results for over 4500 UK children and range of gender-based modes of play and both playmate and toy preferences were analysed. Sexual identities were then compared for these same children at age 15. Some of the data is summarised below in Figure 1: 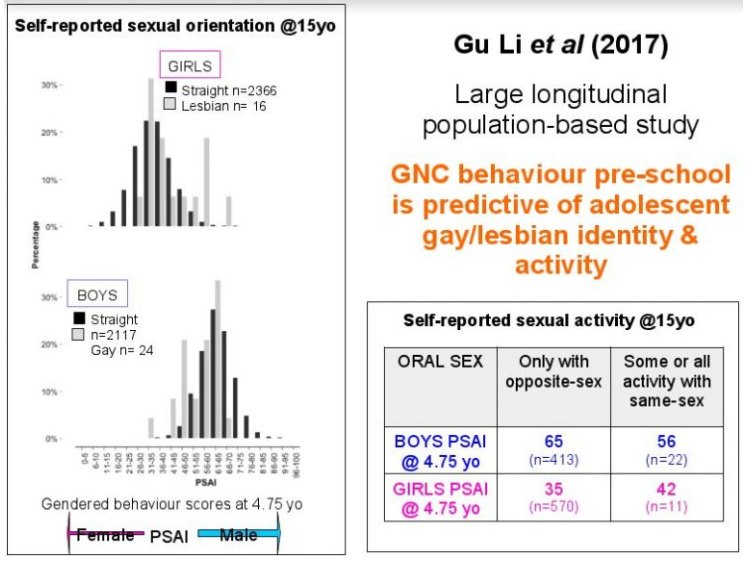 Even gender non-conforming behaviours seen as early as 2.5 years showed some correlation with later same-sex attractions.

This study backs up previous findings published in 2013 by a different academic group. Steensma et al compared the data for 850 individuals from the general population looking at gender non-conforming behaviours recorded in childhood (pre-school) and sexual orientations in adulthood (age 27). In the group of children who exhibited GNC behaviours 10-12% grew up to be gay men or lesbian women. This compares to a baseline of only 1.2-1.7% of children who did not exhibit GNC behaviours growing up to be gay. This means a gay identity was 8-15 times more likely to be seen in adulthood if individuals exhibited GNC behaviours as children compared to those who did not.

It is important to emphasise that although GNC behaviour as a child is a good predictor for same-sex attraction later in life in most cases GNC children will grow up into heterosexual adults.

This Dutch study looked at children referred to a gender clinic before the age of 12 and diagnosed with gender dysphoria. They found that the strength of the dysphoria and whether it persisted through to adolescence was highly correlated with a same-sex attraction in adolescence.

Figure 2 shows for natal girls with gender dysphoria virtually all those whose dysphoria persisted into adolescence also exhibited a lesbian identity. In contrast, girls whose gender dysphoria resolved by adolescence were straight. It is currently unknown whether their gender dysphoria will progress into adulthood and whether or not these lesbian girls will choose a transgender lifestyle and/or medical assistance to transition via surgery or hormones. Long-term follow up studies are yet to be completed. 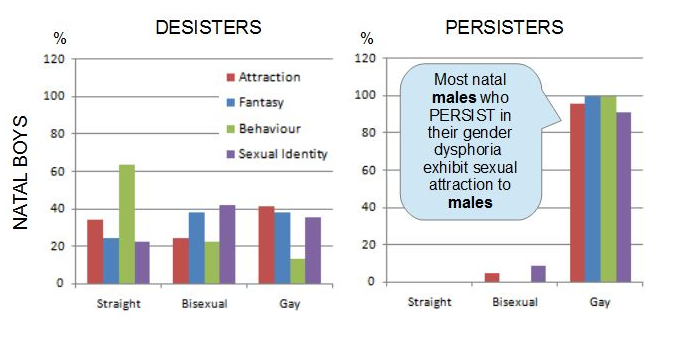 Conclusion: These studies highlight how interconnected a developing homosexual identity can be with gender non-conforming behaviours and gender dysphoria in young people. How can we be certain whether this will lead to a stable and lifelong transgender identity as an adult?

Why are so many adolescent girls being referred to gender specialists (2/3rds of all referrals to the Tavistock clinic in 2016 were natal girls)? How do we disentangle any internalised misogyny and/or homophobia in these girls as potential reasons why they do not want to be lesbian girls?

How will the increased popularity of childhood social transitions and the increased use of puberty blockers affect the final outcomes for these children? Will they help a transgender child with their dysphoria as is intended, or will they make it more difficult for a non-transgender child to naturally resolve their underlying gender issues?

How will the promotion of ‘gender affirmation only’ approaches by professionals and lobby groups help children and parents explore alternative pathways? How will social contagion and the increased availability of non-evidence based ideas on the internet impact on the choices made by and strength of feelings of children growing up today?

So little is known in this area yet decisions are being made for and by children that will commit them to a life-time of medicalisation, infertility and irreversible body modifications. The NHS currently recommends cross-hormone treatment can commence as young as 16 and surgery as young as 18. Puberty suppression can start at the onset of puberty and childhood social transitions can occur at any age. In theory a child’s natural puberty can be restarted at any time if they change their minds and they stop taking puberty blockers. However, once puberty blockers are started it is extremely rare for children to stop and virtually all go onto cross-sex hormones, which effectively locks in their alternative puberty. We don’t know how serious the side effects of puberty blockers may be, nor do we know the effects on cognitive development or the psychological effects of delaying puberty.

There is currently no strong evidence base from which to predict outcomes for this generation of children with gender issues. Long-term studies are desperately needed to monitor these children to inform the safety and effectiveness of the current therapeutic strategies.