You are here: Home / Science and statistics / What are puberty blockers? 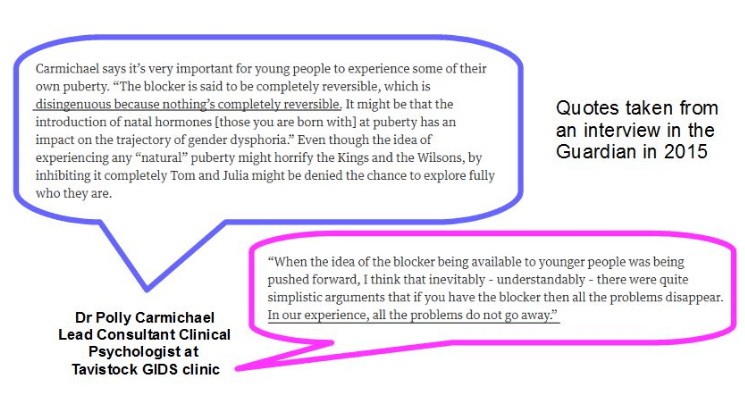 Under the age of 16 the only medical treatment that is recommended by the NHS for children struggling with issues of gender identity are PUBERTY BLOCKERS.

The drugs used are a class of synthetic gonadotrophin-releasing hormone (GnRH) analogues. By acting on the pituitary gland, these puberty blockers prevent the release of chemical signals which stimulate the production of estrogen and testosterone, halting the changes of puberty caused by these sex hormones.

Obtaining puberty blockers via the NHS can only be done for children with gender issues by the children’s Gender Identity Development service (GIDS). The main clinic is in London at the Tavistock and Portman Clinic and there is a satellite clinic now in Leeds. To date, GIDS has treated 800 children with puberty blockers, with about 230 of these children under the age of 14, the youngest child being 10 years old. The earliest these drugs can be used is at Tanner stage 2 of puberty.

The claimed therapeutic benefit is to allow more time for children to consider whether they want to continue transitioning via cross-sex hormones and surgery, without the stress of ongoing unwanted pubertal development. Those who choose not to transition can stop taking blockers, and it is claimed that their original puberty will resume and progress normally. The drugs are claimed to be effective, safe and fully reversible.

We believe it is too simplistic to consider puberty blockers a neutral choice with absolutely no fixed or adverse consequences. This page will discuss the potential risks and uncertainties around the use of puberty blockers in children both in terms of safety and effectiveness long term. For a more in depth discussion an excellent 2017 academic review is available.

1. Side effects of GnRH analogues

GnRH analogues were first licensed for use as end-stage prostate cancer drugs in 1985 and are still in widespread use today. They have since been used in other indications and are most recently being used ‘off-label’ to delay puberty in children with gender dysphoria. They are also used by transgender adults on cross-sex hormone therapy to suppress the production of their natural sex hormones.

In the US, a GnRH analogue drug with the tradename Lupron was licensed in 1993 for use in children with precocious puberty. It was also commonly used off-label to help children who needed to grow taller. There is now a growing number of women who used Lupron in childhood who are reporting serious issues with bone and blood disorders and joint problems in adulthood.

It has long been known that mechanistically GnRH analogues can cause bone thinning. The reduction of estrogen levels in girls can induce a temporary osteopenia (similar to what’s seen in menopause when estrogen levels naturally fall). A 2009 study showed that Lupron caused bone thinning in girls treated although bone density was seen to return to normal levels within 10 years after treatment. There is also a large 2005 study in men treated for prostate cancer in which a significantly increased risk of bone fractures was observed. The bone thinning effects are also mentioned in the ‘Important safety information’ leaflets that accompany Lupron and extended use is not recommended in people with pre-existing bone thinning conditions.

The FDA considers the drug’s impact on children’s bones an unanswered question, according to a statement: “The effects of bone density in children whose central precocious puberty is arrested with a GnRH agonist are considered ‘unknown’ as they have not been studied”

The UK endocrinologists at GIDS prescribe the GnRH analog called Triptorelin. Although slightly different to Lupron all these drugs are in the same class of GnRH analogs and all have the same mechanism of action. The mechanistic safety issues will most likely apply to the whole class of drugs.

Triprorelin is manufactured by two different companies under the tradenames Gonapeptyl Depot and Decapeptyl SR. This drug has been approved by the National Institute for Health and Care Excellence (NICE) for use in children with precocious puberty, although it should be noted that it is being used ‘off label’ for children with gender dysphoria. This means its use by the NHS does not come with regulatory approval because the appropriate safety studies are not available.

Leuprorelin (Lupron) has not been approved by NICE for use in children. This is only prescribed if adverse reactions are observed with Triptorelin. GIDS prescribing information was made available under a freedom of information request.

2. What is the longer term impact on gender identity? 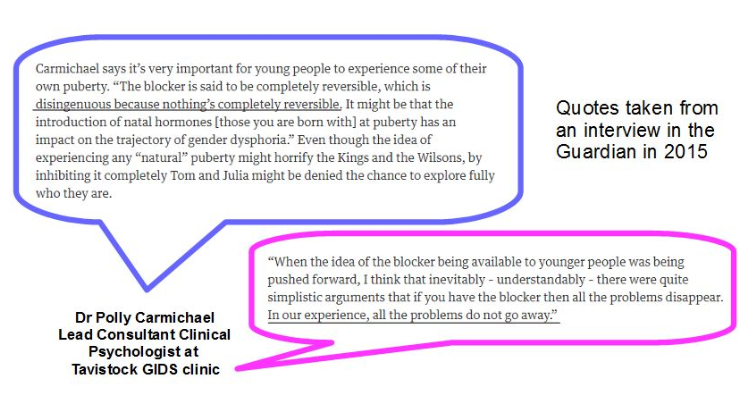 Although blocking the progression of puberty can relive the immediate distressing symptoms suffered by children with gender dysphoria the long term effects are unknown. There have been no long term studies on the effectiveness of puberty blockers and it is unknown whether interrupting natural puberty alters the natural trajectory and perhaps resolution of gender dysphoria in children.

Gender identity is shaped during puberty and adolescence as young people’s bodies become more sexually differentiated and mature. Given how little we understand about gender identity and how it is formed and consolidated, we should be cautious about interfering with the normal process of sexual maturation.

What we do know however is that virtually all the children who start on puberty blockers eventually go onto cross-sex hormones suggesting that changing their minds is rare once natural puberty is interrupted.

3. Are the effects on puberty really reversible?

Since it is rare for children with gender issues to stop taking puberty blockers this also means there have been no long term studies to show that normal puberty will resume in these children. The evidence of ‘reversibility’ is from studies in a different set of children; namely children with precocious puberty (a puberty disorder in which puberty commences very early. Technically this is before the age of 8 in girls but could be as young as pre-school age). In these children puberty blocking drugs are normally withdrawn around the age of 12 and menstruation in girls commences about 1 year later. In this respect the resumption of puberty occurs around the ‘expected age’ in children and will be in line with other aspects of physiological and psychological adolescent development.

This is very different from the approach in children with gender dysphoria. Normal puberty is postponed while the normal ageing process proceeds. Restarting natural puberty (or inducing cross-sex puberty artificially at 16) would therefore be out of step with other development processes. It should also be noted that virtually all cases of precocious puberty occur in girls so there is extremely little evidence of the restarting of puberty in boys. For these reasons the true reversibility of blocking puberty in children with gender issues is currently unknown.

4. What are the implications of preventing a natural puberty?

Proponents of the use of puberty blockers say that not only do these drugs relieve the distressing symptoms of ‘the wrong puberty’ in childhood but also prevent the body from undergoing irreversible changes which then have to be modified surgically during adulthood. For example, permanent growth of breasts in females which may necessitate a double mastectomy in the future. Alternatively, permanent facial hair growth in males which may necessitate its removal in the future. However, what is rarely discussed is the effect on the reproductive and sexual development of the child.

Puberty blockers followed by opposite sex hormones will push some though the ‘opposite puberty’ in which secondary sex characteristics of the opposite sex will develop. However, normal sexual or reproductive development will not occur. Girls will not begin menstruation and so will be infertile. Boys’ testes will not grow and develop and will impact on fertility. A boy’s penis will remain immature and remain the size of a child’s into adulthood. This will cause problems sexually if the penis is retained, both functionally and in terms of sexual arousal. It is also problematic if gender reassignment surgery is later chosen since there is too little material to use from the penis and testicles. This is highlighted by the experiences of Jazz Jennings, the reality show star in the US, and a 17 year old transgender male who socially transitioned at age 3 and has been on puberty blockers and now estrogen. Jazz has never experienced an orgasm and with a 2 inch penis may not be able to have the vaginoplasty they had wished for.

Conclusion: It is often said that the use of puberty blockers in children is completely safe and irreversible. This claim however has never been tested in long term studies and its use for gender dysphoria remains experimental. Questions still remain about long term health concerns and the effect on the natural trajectory of the development of gender identity.