You are here: Home / GRA consultation / Fair Play For Women submission to the Women and Equalities Select Committee inquiry on GRA reform 2020 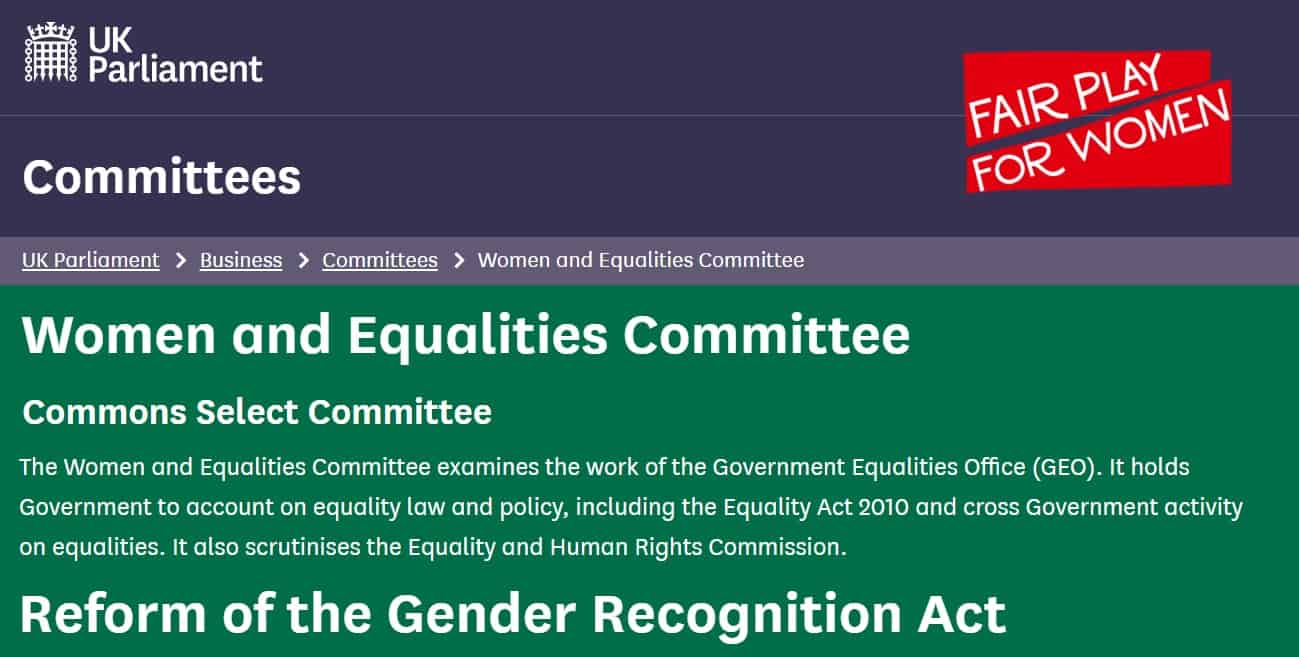 On the 28th October 2020, the Women and Equalities Select Committee (WESC) launched an inquiry into proposed reform of the GRA. They called for evidence in response to the government’s proposed modernisation of the GRC application process. They also asked for evidence on the wider implications and issues surrounding transgender equality and current legislation.

The full written submission made by Fair Play For Women is now available on the WESC website. Our executive summary and recommendations can be read here:

The GRA2004 directly interferes with and impedes the use of the sex exceptions by making them difficult to implement and understand. Laws on paper are worthless if they can’t or won’t be put into effect.

The GRA2004 indirectly interferes with the use of the sex exceptions by undermining the concept of sex as being fixed at birth and based on the bodies we have. This has made it more difficult for women and girls to talk about the needs they have because they are female.

Any reforms that increase the number or range of GRC holders in the UK will make these existing problems worse and further limit availability of female-only provision.

Guidance published by the EHRC and others go far beyond any reasonable legal interpretation of the Equality Act. This has led to widespread misunderstandings about how and when to use the sex exceptions.

Stop using the word ‘gender’ as a synonym for ‘sex’ and retrospectively update all official documents that conflate the two terms. (Section 8)

Expand the list of exceptions listed in Section 22 (4) of the GRA2004 to include health and safety. E.g. “it is not an offence under this section to disclose protected information relating to a person if: the disclosure is for the purposes of preventing injury or harm to others. (Section 9).

Add an amendment to the GRA2004 making it clear that ownership of a GRC does not prevent the sex exceptions in the Equality Act 2010 from being applied. Or separate the two Acts completely by adding an extra exception to the GRA2004. E.g. “Where someone has a gender recognition certificate they should be treated in their acquired gender for all purposes, except in relation to the protected characteristic of sex in the Equality Act 2010. (Section 10).

In prison, having a GRC confers a significant advantage and so the eligibility criteria are of critical importance. Any reforms that increase the number or range of GRC holders in the UK must be fully evaluated in terms of the impact on women in prison (Section 11).

We urge WESC to making it clear in their report that it is possible to respect a trans person’s gender identity while also acknowledging that all transwomen were born male. (Section 12).

Add an amendment to the GRA2004 to include an exception for data collection. E.g. “where someone has a gender recognition certificate they should be treated in their acquired gender for all purposes, except for equality monitoring purposes. (Section 13)

Better guidance is needed to ensure the workability of the sex exceptions in the Equality Act. It must be understood that the two protected characteristics are separate and should not be conflated. This guidance must be produced by a reliable, impartial source with comprehensive and transparent stakeholder involvement. This new guidance must be communicated clearly and effectively to all service providers to undo the many years of misdirection and misunderstanding. (Section 14).

Why do so few transgender people apply for a Gender Recognition Certificate?

What are the challenges in the way the Gender Recognition Act 2004 and Equality Act 2010 interact?