You are here: Home / Guest posts / Want to know why women are livid on MumsNet?

Yesterday, an excellent thread started on MumsNet that captures in a nutshell exactly why women are not happy about the way laws are being interpreted and what we need to start to do. It’s a 2 minute read that all women must know about.

Want to know why so many posts start with ‘Trans people should have full rights…but’…?

Because the equality act is being manipulated to elevate the rights of one protected characteristic over another.

Because the equality act is designed to be fair. All protected groups have equal value.
It’s got the word in the damn title.

But the one thing this doesn’t feel like, is equal.

Equality decisions must fairly balance the needs of everyone affected. This does not mean treating everyone the same. Because sometimes treating people differently is the least discriminatory outcome overall.

So when a business wants to implement a new policy they must take into account how it will impact on all the protected characteristics and then work out the fairest and least discriminatory way to do it. Life doesn’t happen in a vacuum. A rule for one will impact others too and the Equality Act has been designed to reflect this reality. It is perfectly legal to discriminate against someone if overall it’s the fairest thing to do for all concerned. The key phrase here is ‘a proportionate means to a legitimate aim’.

And in no-one’s book does fairness mean boys’ sleeping in girls’ accommodation, beating them at sport, making girls uncomfortable or working in a rape refuge.

It is not transphobic to raise this at work, in school, in leisure activities.

The gaslighting has to stop.

What we have been witnessing is no longer about fairness and inclusivity, it’s about a cohort of men actively campaigning to hoodwink or coerce the public into validating NOT their identity, but their authority.

Can a refuge for women employ female-born staff only?

Yes, of course they can. We all accept this because despite it being unfair to men it is overall the fairest thing to do for everyone involved. And for exactly the same reasons, it is lawful to exclude people who have reassigned their sex/gender, from that job role. In this instance, the internal gender feelings of the employee is not as important as the impact of their perceived maleness. The needs and impact on vulnerable women seeking refuge are greater than the needs and impact on a transgender person seeking employment. In this instance the balance falls squarely favour of women.

A transactivist will want everyone to draw everyone’s attention solely to the impact and unfairness of that situation on the transgender people and claim DISCRIMINATION!. But that’s just not how it works. It’s written down in law – Occupational Requirements Schedule 9 Part 1.

There a lots of these legal exemptions written into Equality Law. They have been put there to be used and to protect women. We have to start insisting that they get applied. All of us. Now.

Here are some more examples that this time apply to services (Schedule 3, Part 7 Sections 26-28).

Can a woman ask for a female-born health care provider?

Yes, she can. It’s not transphobic to say no to a transwoman in that context. She’s not saying no because they are transgender – it’s because they were born male and as someone born female she prefers the same. It’s written in law (Schedule 3, Part 7, Sections 26-28) and examples are set out in the Equality Act: “If a service is used by one or more people or involves physical contact between a user and someone else and that other person may reasonably object if the user is of the opposite sex”.

What about changing rooms?

If a trans-identified male wants to use a female changing room with individual lockable cubicles and no-one minds, then fine. The overall balance is fair. But if people do object, and for reasons of privacy, dignity and safety when they in a state of undress, and they don’t feel able to use the changing rooms with just a flimsy curtain that doesn’t close properly, then the balance of fairness changes.

The equality act does not say oh well, too bad. The retailer must take into account the impact on other people too (women). If there are reasonable options available to the retailer that makes it fairer for all then they must consider them.

Insisting all transgender people must use the facility of their natal sex would be unfair to them, but this doesn’t mean the only fair option is to allow them into the facility for the opposite sex or to make the whole thing uni-sex and to hell with how the women feel. It could be enough to provide them with an alternative, just for them. This is a fair balance that considers everyone.

But a retailer doesn’t know the impact on us unless tell we tell them. Women are socialised to not object. Which is part of the problem. Let’s stop doing that. Let’s hold our retailers to account to uphold the equality act by telling them we object, and why. They must take that into account.

Don’t wait for it to actually happen. Get them to formalise their policies and insist they take women seriously from the start.

What about fairness in sport?

The equality act is quite clear. It’s written into Equality law Schedule 16 Part 1. It’s is entirely lawful to restrict participation of transgender people if this is necessary to uphold fair or safe competition.

“A gender-affected activity is a sport, game or other activity of a competitive nature in circumstances in which the physical strength, stamina or physique of average persons of one sex would put them at a disadvantage compared to average persons of the other sex as competitors in events involving the activity”

The IOC have issued guidelines that rely on testosterone being the determining factor and deciding that reducing it will eliminate the advantage TIMs have. But when men are routinely beating women, it’s quite clear that this is not an adequate determinate.

Sporting bodies, Swim UK, etc, should be able to provide evidence of a level playing field. Otherwise it is neither fair or safe for women and this is in breach of equality law.

Again there is a exemption in the equality Act to deal with this (Schedule 23). It explicitly states that transgender people can be excluded from communal accommodation for use by one sex if that is that’s the fairness thing to do overall. In other words, the least discriminatory option. The needs of all pupils must be considered. The protection of the dignity and privacy of girls, is a legitimate aim. Furthermore, requiring pupils to share accommodation with the opposite sex raises specific issues around menstruation, risk of pregnancy, etc. Any institution which fails to acknowledge and accommodate these issues when formulating policy will risk breaching the EA.

The EA does need tightening up. Not ripping up. Trans people are already assuming they have a whole bowl of fruit and making everyone else assume it, when, in actual fact, they only have a couple of plums.

It’s now no surprise that the favoured narrative is that trans people are oppressed, abused, murdered, at risk. Because it is that description that has somehow elevated the protected characteristic of ‘gender reassignment’ above ‘sex’ in people’s mind. It’s completely wrong.

We have to change the narrative here.

We can change it. We have the right to change it.

We just need to do it!

by a poster on MumsNet

Fair Play For Women supports every word of this!

The Equality Act’s single-sex exemptions are the best kept secret that transactivists don’t want women to know about. We’ve been conned that transgender people have to be centred else its discrimination.

The problem is that most organisations are shamefully ignorant of this law. We need to start educating them.

FPFW has produced a factsheet summarising the single-sex exemptions. Print it off – hand it out to organisations – lets start challenging the status quo. Demand that women are considered in their policies. 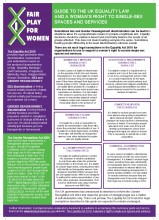 If you want to know more read this comprehensive FPFW guide to women’s rights as enshrined in the Equality Act.