You are here: Home / Supporters' stories / Victoria Hood and her fight for women’s cycling. 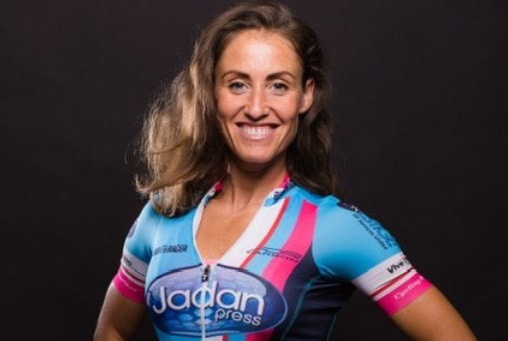 Victoria Hood is the founder and manager of Team Jadan-Weldtite, a British all-female cycling team. Two years ago she was national masters champion in two disciplines.

Victoria spoke at our #WPUKFairPlay meeting on 10th July to a capacity crowd of over 750. This is the video and transcript of her speech.

It took real courage for Victoria to come and speak: she is the first and only working athlete in the UK who has decided to speak up. But as you’ll read, she’s been fighting for women and girls in cycling for years. 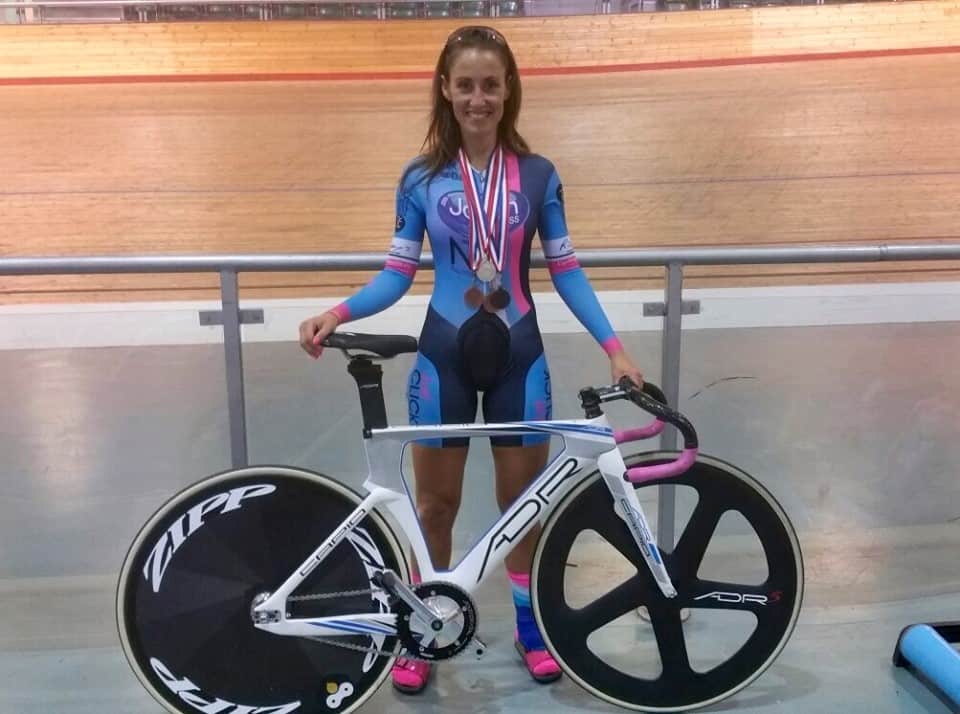 I started bike racing in my late 20’s, I’d always been sporty and trained in a gym lifting weights for most of my adult life. I was also a trained dancer. I happened to see a men’s bike race and asked if women could do it! I didn’t even realise that women could race bikes!

I went and bought myself a cheap heavy bike from Halfords, got myself a race licence and entered my first race.

On the start line I realised I was lining up alongside elite riders. I was a complete novice! By the time I had my feet clipped in the pedals, they were gone.

Let me explain how cycling works.

If a man decides he wants to race, he gets himself a race licence and he enters a 4th category race. All of the men in that race are novice and the field is fair. This allows new racers to come into the sport and gives them races where they can learn the skills and tactics of bike racing. If he wins, he earns points which take him up to 3rd category, then 2nd cat, 1st and if very talented, Elite

As a female, there is no such progression. Everyone is in one race together, from novice to elite. Not only is this very unfair it’s also dangerous. Bike racing is a dangerous sport where you are all grouped tightly together touching shoulders and travelling at speeds in excess of 25mph, you need to know what you are doing.

In my first year of racing I lined up against World and Olympic champions. I never saw any ‘new’ women enter the sport. And to be fair, why would they?

Elite women could race with the lower categories of men. Not the 4th cat as everyone knows those races are full of crashes but they could ride with the cat 2 men, if they chose to. They wouldn’t win these races but they could stay in them. For any other women, it was pretty dispiriting.

I couldn’t understand how more women would ever come into this sport with the system the way it was and it became obvious to me that individuals would have to take it up themselves.

The races relied on a network of organisers who volunteered for British Cycling and ran races for men. All of the organisers were men, there were very few women involved and no women on the regional boards. It was basically an old boys club and whenever I tried to persuade them to put on a women’s race alongside their men’s event, the answer would always be the same. Women do not want to race. But I knew they were wrong.

There were so many barriers, the organisers did not care about women’s racing. Often a woman would pay to enter an advertised women’s race and then be told on the start line they were being put in with the 4th cat men!

We got the message loud and clear! We were an after-thought, we were not important!

So, I decided to set up my own race team. I had been travelling to races alone and it was not a welcoming environment, I thought if I set up a race team I could find other women that also wanted to race and we could support each other. If other women saw a team of friendly racers it would encourage more to have a go.

I persuaded the organisers they needed to put on more women’s races and split up the categories. I told them they could not keep putting women in with the men otherwise they would never encourage more women to race. It doesn’t matter how many women you have on the start line. Keep the races separate and eventually more women will have a go.

In 2014 I finally managed to set up the first Yorkshire Womens Road Race Series. These were a series of road races for category 2/3/4 women (so no elites!) full open roads with rolling traffic closures just like the men’s races (not like the small circuits women had been confined too).

In that first year we held 6 events and had full fields of 50 women in each, the majority of which were new to racing!

The year after that, I convinced the region to hold a separate women’s championships. The first region to do so.

This was 3 years after the 2012 Olympics where a Yorkshire girl, Lizzie Armitstead, who’d somehow managed to make her own way into the world of professional cycling, fought the most amazing battle with Marianne Vos in torrential rain to take the silver medal in the road race. That race was watched by more viewers then the men’s road race. And while Lizzie inspired a nation, we were still fighting just to even hold a women’s race.

I’m now going to talk about the youth and junior girls and the difficulties they face.

I soon realised that the situation was just as bad for junior girls. At youth level (Under 16) girls were racing. The parents are still very much involved at that age so the riders would have their support and support from cycling clubs. Sometimes the girls would race in with the boys and maybe have a separate girls prize. However…

The drop off rate from these youth girls when they hit the junior age of 16 was huge. We were losing so many of our talented girls.

When a youth boy moves up to junior category he has a full series of races to aim for, these include very prestigious races which are very well known for developing the next generation of cyclists. They also have their own junior national championships.

The girls had nothing! Absolutely nothing. They could choose to either race with the junior boys (which they would never do as they would be so out of their depth now these boys had developed) or their other option was to move straight into the elite women’s category. This was deemed better than trying to compete against junior boys. There was no support or funding, they would have to do this alone and travel to races around the country to race against the UK’s best women. They had gone from doing 30 min races on closed circuits to open road races of 60 miles, there was no progression for them, it was all or nothing.

I started by taking on as many youth and junior riders as I could and offered them support and long story short, started all the same battles again. In 2017 – a full 5 years after those Olympic Games that were supposed to inspire young people – we finally got a junior women’s championship. In just 2 years the fields are full and the talent coming through from the UK is exceptional. Nearly all of my first intake of youth riders stayed in the sport and are now on the senior GB squad heading for the world championships this year. They will be our future Olympians.

The junior scene is growing which is positive but there are still lots of barriers to teenage girls competing.

In 2009… there were 305 Youth girls age 13-15 with Racing licences in the UK, but at junior, over 16s, only 67. Now, 10 years later….there are 852 youth girls racing, but still only 235 junior girls are racing this year in the UK. It is increasing but it still shows the drop off rate and barriers stopping girls from continuing with their sport once they reach 16.

The funding is difficult, and as we all know, girls can’t be what they can’t see and it’s hard for us to raise sponsorship without coverage. Media and television are showing a small amount of women’s racing but there is still that view that people won’t watch. I’m pretty sick of this argument around women’s sport as I find it’s easily disproved. I’m sure people said the same of the Lionesses before they showed the world cup and we know how many people watched that!

And what about the money?

Sponsorship for women’s teams is hard to come by. We train just as hard as the men, if not harder as the women have to hold down a second job as well as perform at elite levels.

The men are paid! I would love to be able to give my girls a wage but to be honest, just expenses would be nice!

In 2019, men still run cycling. For a number of years I was the only female in the managers meetings at European races and it was pretty standard to have the male managers look me up and down or smirk at me like it was so amusing to them that I was mixing in their game. Just last week I was in the pits at a national series race, which I’m very proud to say, my team were leading. I had all the girls spare bikes and wheels set up in the pits area as there are no laps out allowed and it’s imperative they get fixed as soon as possible if they have a mechanical. Before the women’s race was even half way through we had the staff of the men’s teams pushing their way into the area with their numerous spare bikes and commandeering the space.

Make way …. here comes the main event! They still believe we are just there as a warm up act and it shows.

Cycling Weekly is probably the most read magazine in the UK cycling scene. I stopped buying it a few years ago as they never bothered reporting on women’s racing. The last time I bought it they were still advertising a Christmas calendar of young female sports people in varying states of undress. Imagine then, how I felt when this year they gave a double page spread to male trans-cyclist Rachel McKinnon. 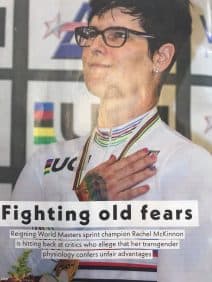 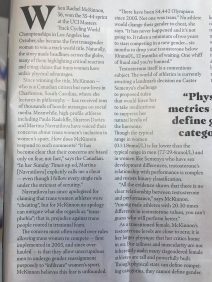 Young female cyclists read that magazine and here they were being told it is fair for transwomen to compete against them and if they disagree… they are the ones in the wrong. They are denying someone their human rights.

With such a lack of respect for women’s sport in general, it’s not hard to see how it could be easy for these people to advocate or turn a blind eye to opening up female sports to biological males. They don’t give it much thought – it’s not important to them and it doesn’t affect the men. They don’t believe women’s sport is important enough to protect but … I know it is!

I know that women do not want to compete and WON’T compete in a field they believe is unfair.

I’ve fought pretty hard to get where we are today and there is hope in the future of women’s cycling, we don’t need another barrier. We’ve finally got proper, safe, competitive categories of racing for women and girls, and now we could lose it all. We can’t let that happen. 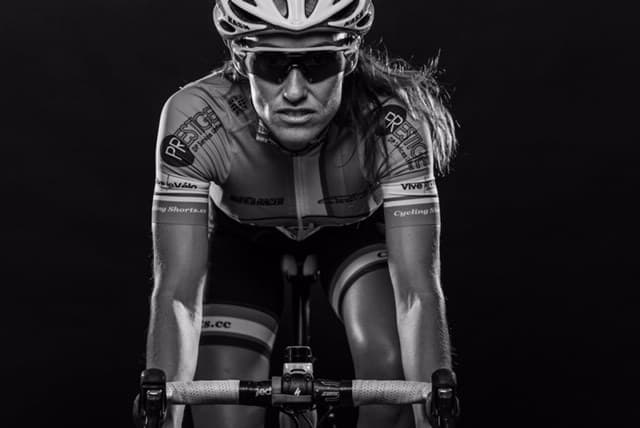