You are here: Home / Sport / USA Powerlifting stands up for facts and fairness and makes the female category for females only 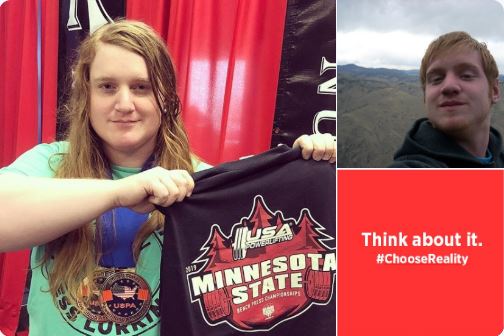 USA Powerlifting has a clear and fair policy on transgender participation in competition. Sex matters in sport. Not gender identity. This is a great example of how this can be done. Thank you USAPL for standing up for fairness. 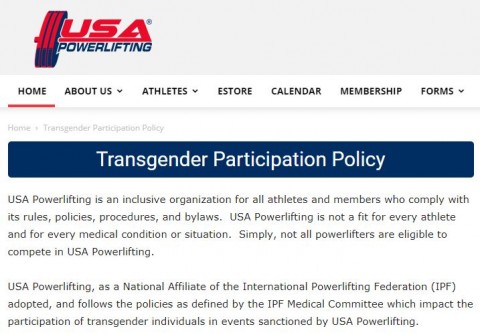 Performance enhancing drugs like Testosterone are banned for ALL competitors. The lifelong advantage a male gets by growing, developing and training on Testosterone means they cannot compete against females. 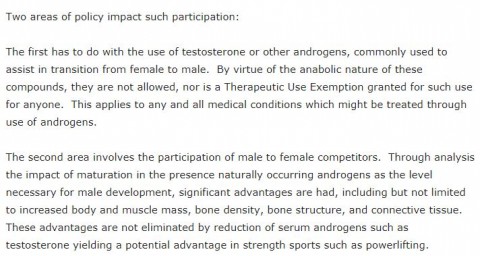 IOC guidelines allows each sport to set rules their own specific rules based on fairness.

The IOC guidelines on transgender participation are very clear. The overriding sporting objective is FAIR COMPETITION. 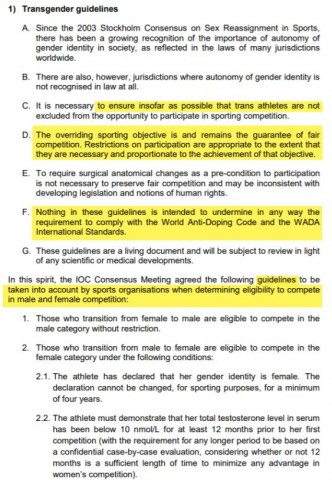 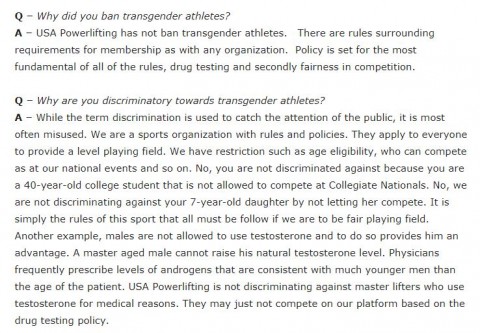 Male-born trans lifters retain male performance advantage over females. Going through a male puberty means they are bigger and stronger. Washing out Testosterone before competition DOES NOT reverse this advantage. The scientific evidence is clear. See here, here, here.

Female athletes have a right to meaning competition & a chance to win. Women should not feel pressured to include transwomen at the expense of their own right to fairness. Sports governing bodies must take this burden off the backs of females so they can focus on sport not politics.

There are other powerlifting associations that do allow transwomen to compete as women and do allow use of Testosterone. Some have open competitions for all. Women are free to compete there if they want. But the choice of female-only must always be protected. 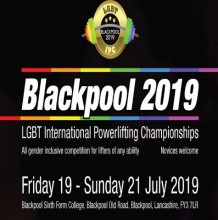 Despite these clear, fair and evidence based rules the backlash against USA Powerlifting has been immense. There will be protests this weekend at the Minnesota competition this weekend. A quarter of the female lifters have already pulled out under the pressure. Female athletes who are still competing a fearful of speaking out. 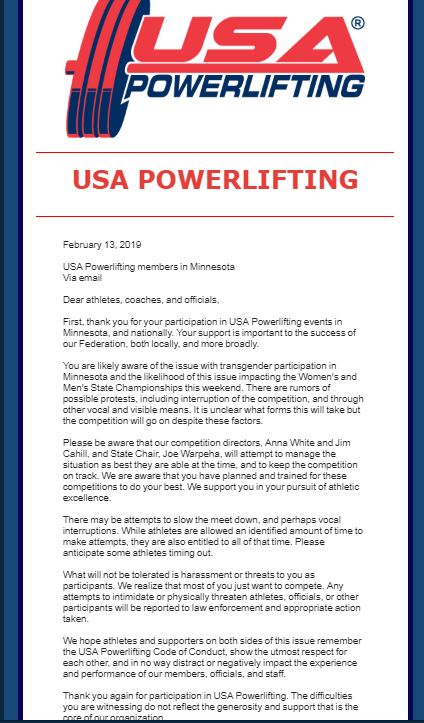 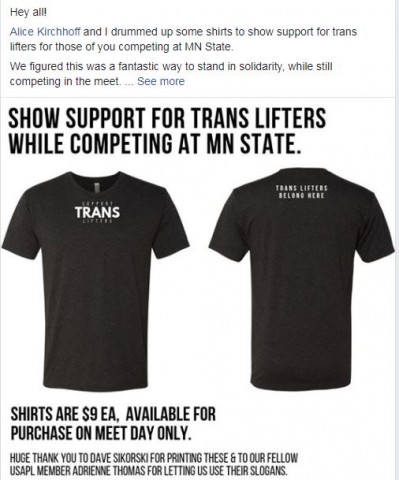 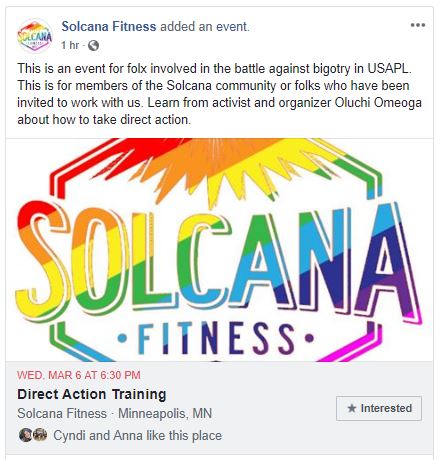 Even the Minnesota meet organiser Anna White is encouraging the protests 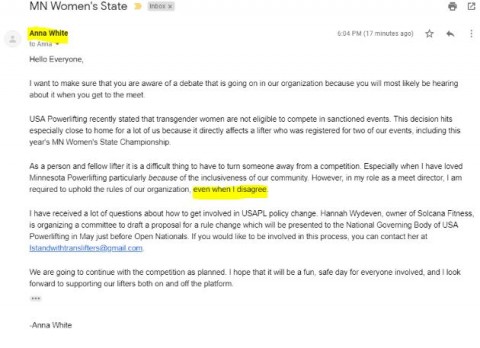 Even Congresswoman Omar has waded in with an open letter to USA Powerlifting no understanding of the issues accusing of ‘discrimination’ and peddling the ‘myth’ that transwomen have an advantage over females. 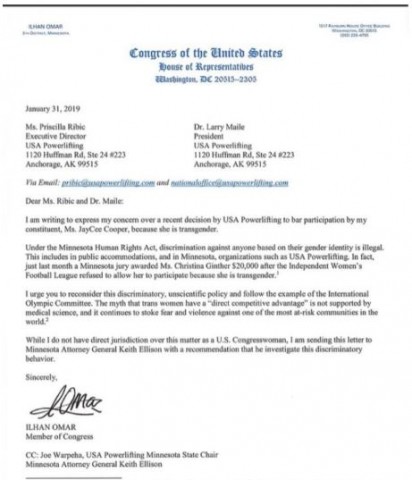 JayCee is demanding entry into the female class despite having a male body. JayCee was born male and washing out Testosterone for 12 months prior to competition is does not wipe out the male performance advantage. Muscles trained on Testosterone are easier to build even. Scientific Fact. 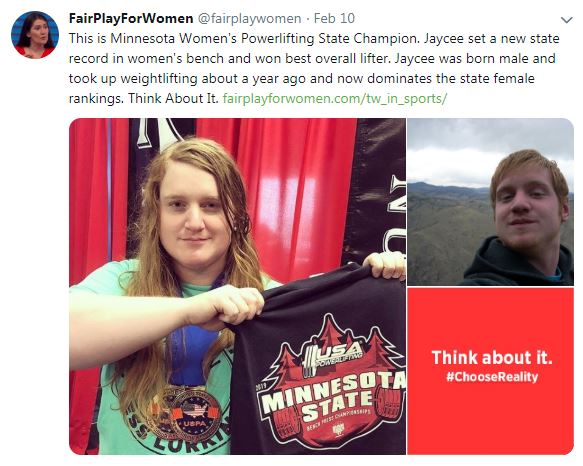 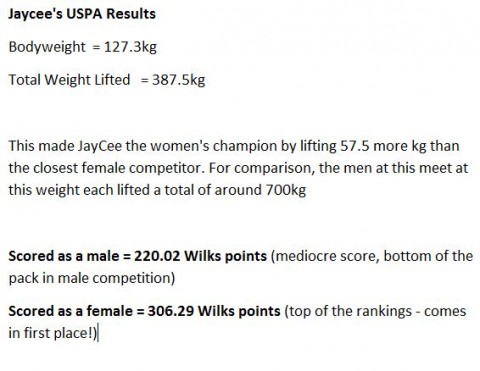 If you value female sport we need you to speak up for fairness. Women in sport need our support. They deserve the chance to win at their own competition. If male-bodied lifters are allowed to compete as ‘female’ this undermines the principle of fair play and makes a mockery of the dedication and commitment women show to their sport.

Make sure you know the issues. Find out more here.

Sport is about bodies and performance. It is not about gender identity.

If you are an athlete or sports professional and want to help us speak up for fairness contact us now, in confidence.