You are here: Home / Silencing women / Twitter support seem to know the difference between the two sexes after all 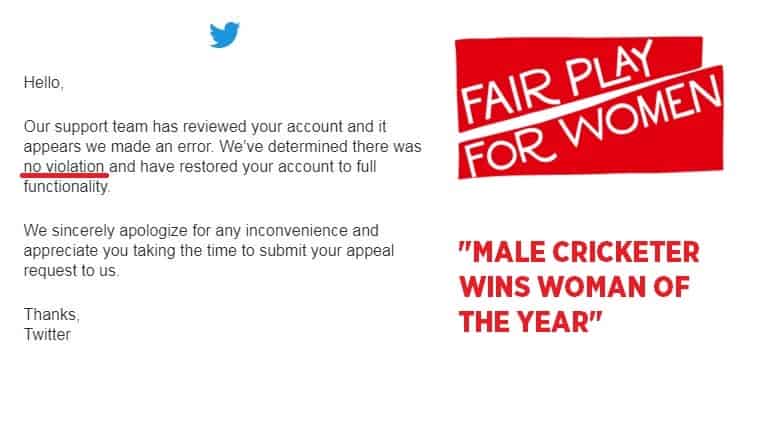 On 14th November the Fair Play For Women twitter account was locked. We were told we had violated Twitters rules on hateful conduct. We must delete the tweet and serve a 12 hour suspension before the account would be unlocked. We appealed. And won. No violation for hateful conduct. 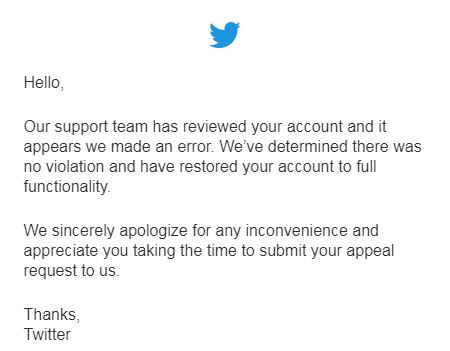 The tweet in question made reference to a current news story and our legitimate concerns about the ECB (England and Wales Cricket board) eligibility rules for female teams. The tweet accurately makes reference to the ECB rules that do not require male players to under go medical transition (e.g. hormones) to become eligible to play in a female team. ECB rules state that self declaration of gender identity as a woman is sufficient. Our tweet referred to a players sex but respects the gender identity of the player in question and did not misgender or refer to the player as a man.

“Male cricketer of the year wins woman of the year. No transition. Just self-ID and new pronouns. Sportswomen must speak up now” followed by a quote copied from a newspaper article “Maxine Blythin was recognised as the 2019 Kent Women Player of the year following her role in the teams county championship triumph” and the link to the story 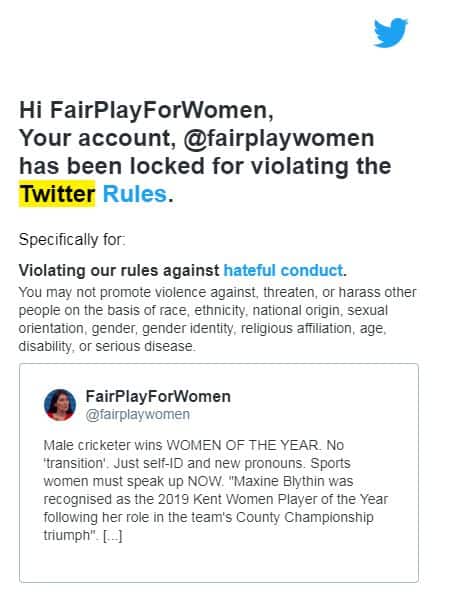 We appealed using Twitters own appeal process. No response was received after 48 hrs so we successfully progressed the appeal via the Better Business Bureau (BBB).

Reference to the players sex as male is a matter of fact (both in UK law and using widely accepted scientific definitions) and is highly relevant in this context. Cricket is a sex segregated sport. Section 195 of Equality Act 2010 states “A gender-affected activity is a sport, game or other activity of a competitive nature in circumstances in which the physical strength, stamina or physique of average persons of one sex would put them at a disadvantage compared to average persons of the other sex as competitors in events involving the activity”. The Equality Act makes it lawful in the UK to exclude males (including males who identify as women) from female teams in sports that are ‘gender-affected’ to uphold fairness and safety. The purpose and content of the tweet was to highlight that despite cricket being a gender-affected sport (evidenced by the fact that female teams and leagues exist in the UK) that a male player is playing in a female team and has won an award normally reserved for females. This is an example of unfairness, as described in the Act. The public must continue to be free to use legally accurate terms for the protected characteristic of sex (male and female) when discussing public policy and matters of law relating to the sex-based rights of women and girls.

Following our appeal Twitter confirmed that there had been NO VIOLATION OF HATEFUL CONDUCT.

A small but important victory.

Male cricketer wins WOMEN OF THE YEAR. No 'transition'. Just self-ID and new pronouns. Sports women must speak up NOW.

"Maxine Blythin was recognised as the 2019 Kent Women Player of the Year following her role in the team's County Championship triumph". https://t.co/BjiMg5Hgjo

Fair Play For Women campaigns to uphold the sex-based rights of women and girls. These are rights set out in the Equality Act 2010. Sex is a protected characteristic. Everyone must be free to use fundamental terminology to describe sex, including the words male and female. We must always be free to name someones sex otherwise we become unable to uphold or describe the sex-based rights of women and girls.