You are here: Home / Prisons / How many transgender prisoners are there and where are they located? Analysis of 2018 HMPPS equality statistics. 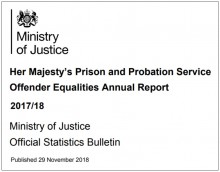 Data including the number of transgender prisoners serving their sentence in England and Wales is captured each year in April. Six months later the figures are released to the public. This article is an analysis of the data conducted by Fair Play For Women.

This year, prisoners who identify as transgender were asked questions about their legal gender and the gender they identify as. This means for the first time we have information on prisoners’ birth sex*, their gender identity and location. However, all information is self-reported by the prisoners themselves and optional, thus limiting the accuracy of the data.

*In all cases legal gender will be the same as someone’s birth sex. If legal gender had been changed under Gender Recognition process they would no longer appear in these transgender figures. 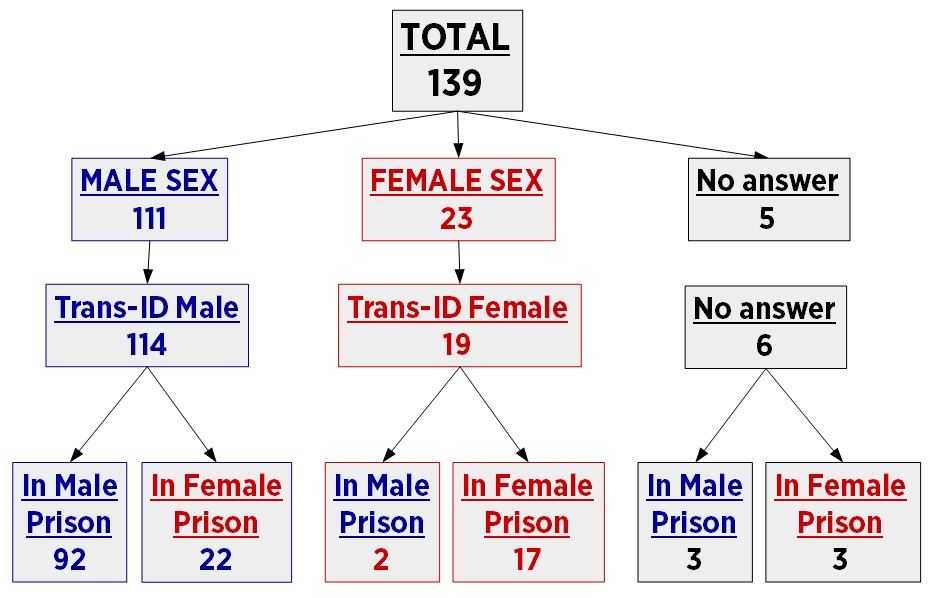 What does this tell us about MALE-born transgender prisoners?

This confirms that at least 22 male prisoners were in female-only prisons at the time of counting. There could be an additional 2 males identifying as non-binary (or not male). Plus any number of male-born prisoners who have legally transitioned to female (not counted in the total trans population of 139).

We know that one of the 22 male prisoners in a female prison is double child rapist Jessica Winfield (aka Martin Ponting) who is currently held at Bronzefield women’s prison. Winfield has reportedly undergone NHS gender reassignment surgery but it is unknown if this involved removal of his penis and testicles.

Karen White (aka Stephen Wood), the convicted rapist (of women) and paedophile will not be one of the 22 male prisoners counted in April 2018. White sexually assaulted at least 2 women prisoners while on remand at New Hall women’s prison in September 2017 and is thought to have been moved to a male prison as a result in November 2017. He is currently serving life with a minimum of 8 years at HMP Leeds male prison. White currently retains a penis and testicles and has undertaken no bodily changes.

Michelle Lewin (aka Shaun Pudwell), a convicted paedophile, will not have been counted as one of the 22 male prisoners. Lewin is currently in HMP Peterborough women’s prison. Despite not having had gender reassignment surgery, Lewin has been granted a Gender Recognition Certificate so will not be counted as transgender but will be part of the female crime stats. Lewin currently retains a penis and testicles.

Stephanie Mottershead (aka Stephen Mottershead), a repeat violent offender, will not have been counted as one of the 22 male prisoners. Mottershead is currently in HMP Styal women’s prison but started his sentence in August 2018 (after the counting peroid in April). He is said to be ‘undergoing gender reassignment’ but this process can include simply stating an intention to undergo a process in the future. Therefore, Mottershead almost certainly retains a penis and testicles.

Freedom of Information requests from 2017 confirmed that 60 out of the 125 transgender prisoners in England and Wales had at least 1 conviction for sexual offences. We currently do not know the figures for the 2018 trans population or how many of the 22 male prisoners in female prisons are sex offenders (only one is currently confirmed – Winfield). Freedom of Information requests have been submitted and this article will be updated once figures are obtained. 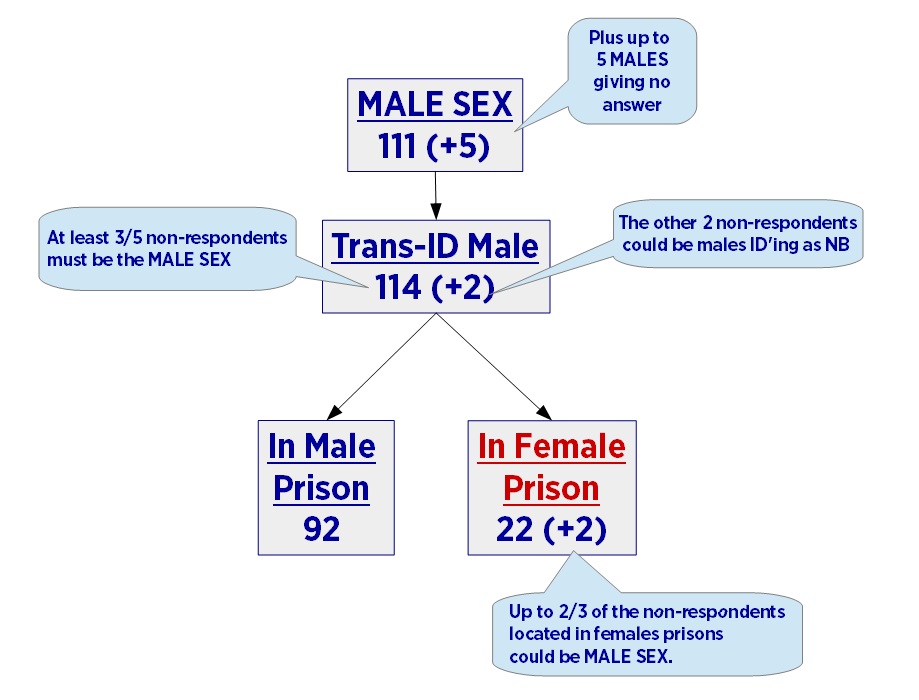 What does this tell us about FEMALE-born transgender prisoners?

There may be 2 female prisoners currently serving their sentence in male prisons. If this is true then the females in question are at serious risk of harm.

Prison policy acknowledges the biological reality that female prisoners do not pose a risk to male prisoners, no matter what their gender identity is:

PSI17/2016 Section 6.4: A female to male transgender offender with a GRC must not be refused a transfer to the male estate. This is because there are no security grounds that can prevent location in the male estate.

However, this ignores the fact that the female prisoner will be at risk from the male inmates. The 2 trans-identified females reportedly in male prison will not have a GRC (not counted in these figures) and the prison service will have been under no obligation to grant a request to move to a male prison.

Alternatively, due to the fact that these figures are obtained by voluntary self-reporting by prisoners themselves it is possible that two male prisoners simply answered that they identify as the male gender. This highlights the problem with using self-reported data. It is satisfactory for equality monitoring but not for a meaningful assessment of the safety of female prisoners resulting from current transgender policy. Accurate data on the location of all transgender prisoners should be compiled from facts known by prison officials. The birth sex of all 139 transgender prisoners will be known from medical records and routine body searches. 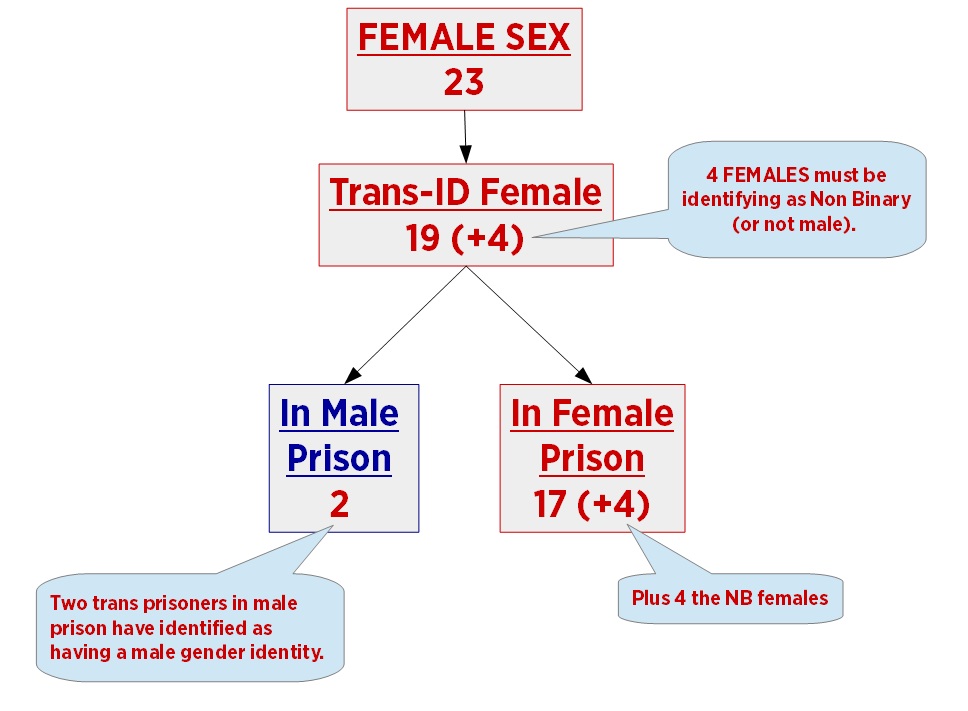 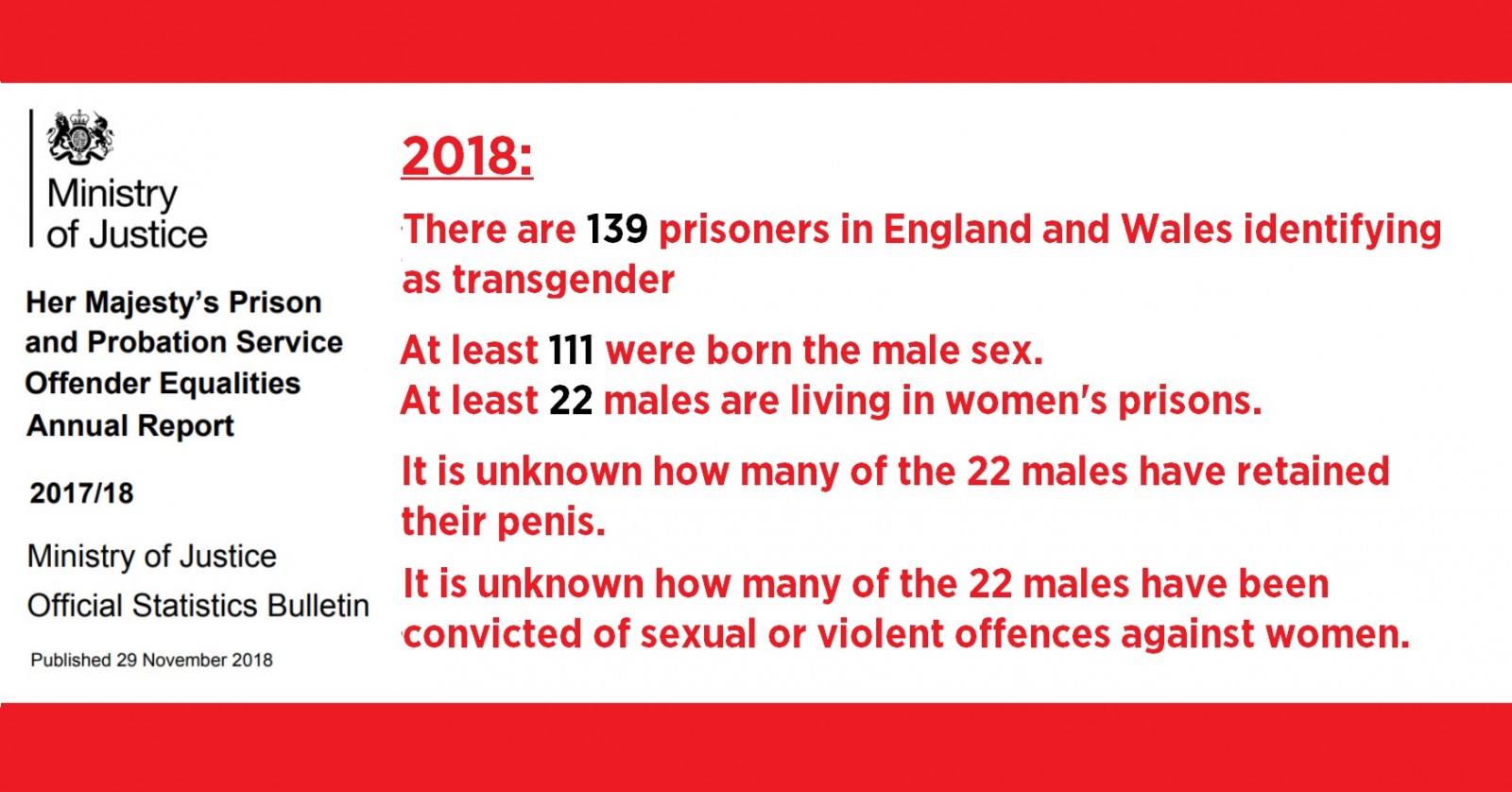 Action you can take.

Current prison policy means that at least 22 male prisoners are now serving their sentence in a women’s prison. If you think this is dangerous and unfair for women prisoners please raise it with your MP and ask to have the policy reviewed. Our petition making this request reached over 10,000 signatures, which meant that a government response would be issued. It did not reach the threshold of 100,000 signatures needed to ensure a parliamentary debate*.

*Previous requests made by MPs for a parliamentary debate were rejected by the Speaker of the House. 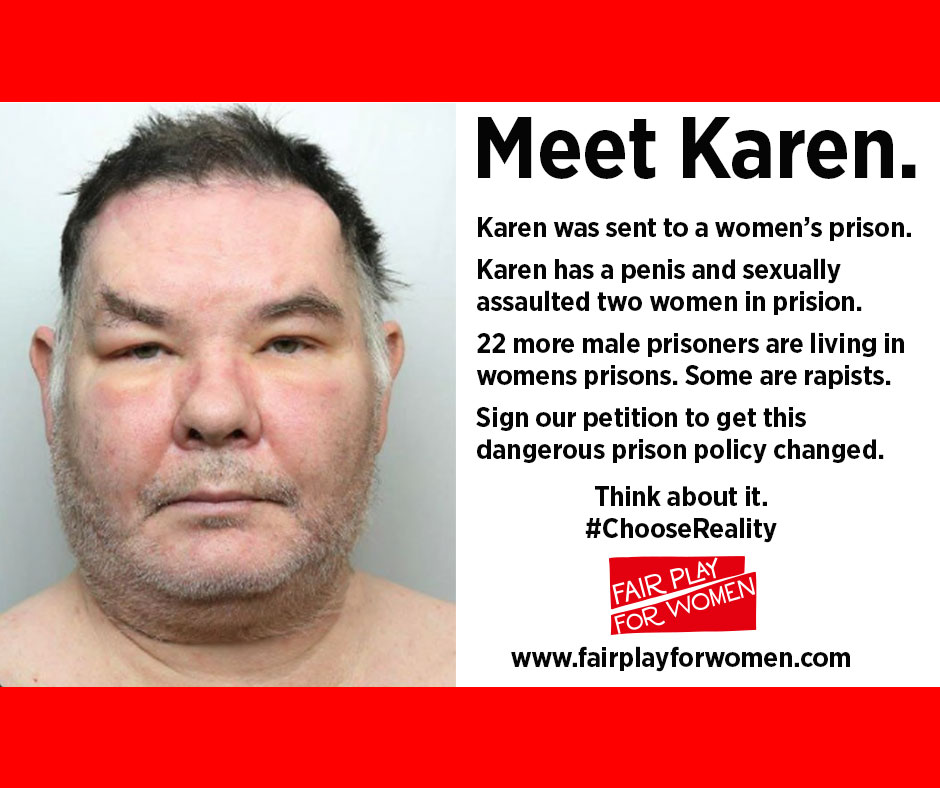