You are here: Home / Science and statistics / The ‘pink and blue brain’ myth

“I was born in the wrong body”. We commonly hear this and similar phrases to describe what it feels like to be transgender. These sound-bites roll off the tongue with ease and have been repeated so many times that it is easy to believe they are true; that the brain is indeed gendered and mismatches can occur between the brain and the body. However, there is absolutely no credible scientific evidence to support this idea. This page will discuss the current scientific understanding in this area of brain research.

The idea that children are born with an innate ‘gender identity’ which develops pre-natally and is impervious to environmental influence is not supported by any credible science.

Body and brain are interconnected; scientists have found no separate innate ‘gender’ area of the brain which is fixed at birth. Children’s brains are very plastic; they develop through interaction with people and the environment and they are constantly absorbing information and influences which shape them.

Research in neuroscience consistently confirms that although sex-based differences exist in regions of the brain, there is no 100% ‘male’ or ‘female’ brain and that all children are born with the potential to develop their own unique characteristics of behaviour, interests, talents and personality, regardless of their biological sex.

Is it possible for the sex of your brain to mismatch your body?

For this to be true it must first be shown that male and female brains are different in the first place. In reality male and female brains do not look very different from each other. In fact it is very difficult for experts in the area to reliably tell them apart. Gina Rippon, Professor of Cognitive Neuroscience at Aston University, gave a fascinating and enjoyable talk at the Royal Institute n 2016 summarising the latest scientific thinking in this area.

The most noticeable difference is size. On average male brains are 10% bigger than female brains; but unsurprising perhaps since male bodies are on average 10% bigger than female bodies. Apart from size most structural aspects of the brain show no differences between males and females with just a few notable, yet tiny, exceptions that are often cited as proof of sex differences. Cortex thickness is commonly quoted as thicker in females, whereas white matter volume is often quoted as larger in males. However, even here there is considerable overlap and it is more of a trend rather than an absolute marker of sex.

Advances in neuroscience and real-time MRI imaging of brains in living people has now allowed scientists to rigorously test for male and female differences. Before this, structural research was restricted to looking at brains postmortem from human or animals. One of the most comprehensive neuro-imaging studies was published in 2015 and clearly shows that the human brain is a mosaic of ‘female’ and ‘male’ features. This is nicely illustrated in Figure 1 using one of the many data-sets from that study comparing over 100 regions of the brain from over 600 different people. The details of the experiment are explained in the publication but the main point being that if male and female brains were structurally dimorphic we would see a clear colour separation between male and female. It is clear that this is not case. If you would like to know more about this ground breaking study there is a great article in the New Scientist. 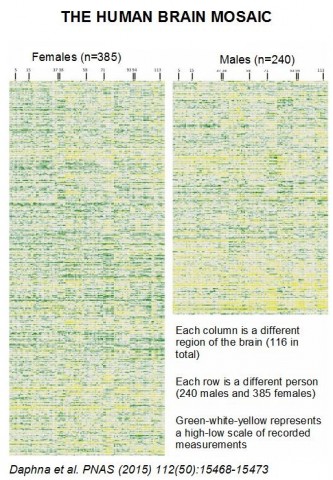 So, in summary there are no clear or absolute structural differences between male and female brains which makes it extremely difficult when it comes to answering the question of whether female brains are found in male bodies (or vice versa) in the case of transgender people. Nevertheless, numerous studies have been done looking at the transgender brain. The findings are summarised in the next section.

Do the brains of transgender people look different to what we would expect for their natal sex?

The short answer is no apart from a couple of small exceptions, although even then they do not look like the brains of the opposite sex either!

An excellent review of all the structural studies carried out on the brains of transgender or transsexual people was published in 2016 Link to review here.

Studies, ranging from as early as 1995, using postmortem specimens from the brains of transsexuals (natal males) first highlighted some brain differences akin to female brains. However, in all these cases individuals had been treated during their lives with cross-sex hormones. Cross-sex hormones are known to cause structural changes in the brain. So these early studies are of limited value.

For trans-identified males, the vast majority of structural aspects where we see a sex difference the transgender brain shows no difference from their natal sex controls. However, there were two areas of the brain that did not match their natal sex.

So, it can be said that the structure of trans-identified male brains overwhelmingly matches what is observed for their natal sex with two exceptions. In these two aspects their brains are similar to but not a complete match to the average female brain. One untested theory is that this may reflect some kind of intersex condition within the brain.

There is however a very important caveat to all these studies. The overwhelming majority of early-onset transgender people exhibit a sexuality that can be defined as homosexual in regard to their natal sex. However, all age-matched controls were heterosexual. So it can not be ruled out that the brain differences observed are in fact differences between homosexual and heterosexual males. This is yet to be tested. 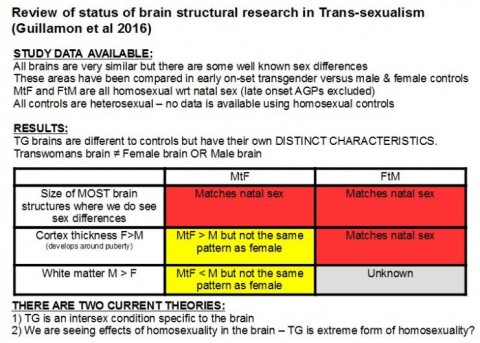 What is the impact of cross-sex hormones on brain structure?

Its well known that cortex thinning is caused by testosterone (this is why males have a thinner cortex) and that the difference between the male and female cortex only really starts to become obvious at puberty. So if a boy delays puberty he is delaying the thinning of his cortex and remaining girl-like for longer. If a girl starts testosterone treatment her cortex is expected to thin and become more male-like.

Estrogen has also been shown to impact brain structure. Estrogen treatment in trans-identified males has been shown to reduce total brain volume towards female proportions.

CONCLUSION: Although we often hear that transgender people are trapped in the wrong body this is a myth and not based on any credible scientific evidence. There is virtually no clear or reliable difference between male and female brains structurally, let alone evidence that transgender people have a brain that does not match up with their natal sex. It is currently unknown whether there is a biological basis to the transgender phenomenon.