You are here: Home / Science and statistics / Trans suicide facts and myths 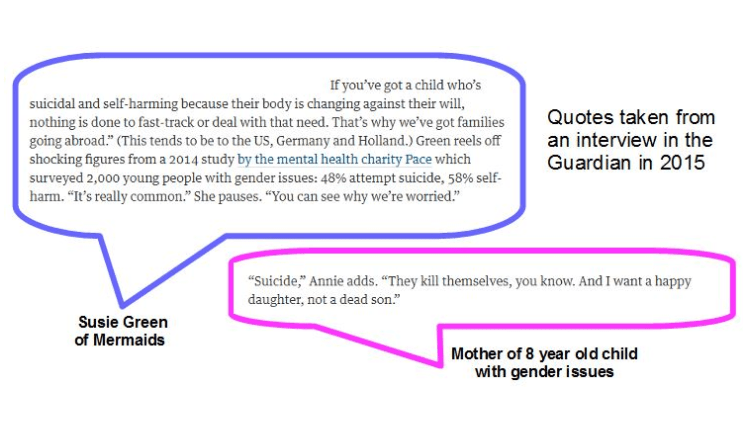 Every parent faced with a child claiming they think they are transgender will have heard the terrifying statistics about high suicide rates when transgender children are not supported in their preferred gender identity. It is frequently mentioned in news reports covering transgender issues and is often a strong emotional motivator for parents to support their child’s wish to transition. It is suggested that ‘affirmation’ and social and medical transition is the only answer to help children with gender dysphoria.

However, is this really true? Is there strong evidence to support this widely held view? We strongly believe that the answer is no.

Although there is no doubt that children and young people suffering gender dysphoria are an extremely vulnerable group deserving of our support and care, the oft-quoted suicide statistics are from surveys which are not robust and there is no evidence that transition is a ‘cure.’

Any risk of suicide is terrifying for parents, every suicide is an awful tragedy and for this reason we feel that exaggerating the risk and constantly using the threat of suicide is extremely unhelpful and irresponsible. We have attempted to sort out the actual facts of this emotive subject, and we present our findings here. 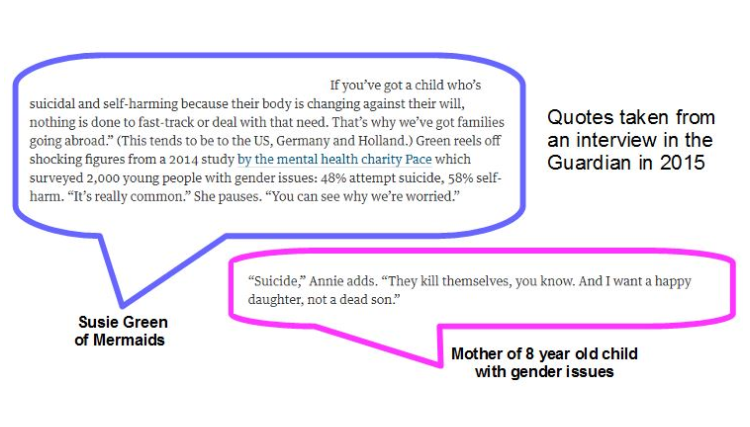 There have been two studies conducted in the UK. We have analysed both in detail as well as contacting the academic groups who carried out the studies. We believe there are fundamental weaknesses in both studies which seriously undermines the claim that suicide is a major risk. We present our findings below.

The RaRE study was a lottery-funded project set-up by the LGBT charity PACE. The lead academic was Dr Nuno Nodin from the Royal Holloway University of London (RHUL). A number of different aspects relevant to the LGBT community was investigated. One part of this included asking transgender people about their history of suicidal thoughts and attempts.

The study was conducted by questionnaire using a non-probability sampling method. This means that the questionnaire was promoted within the LGBT community and people chose whether or not to fill it in. In total 2078 questionnaires were analysed, however only 120 of these were transgender people, and only 27 of these were under the age of 26 years old. It is only the results from the 27 young trans people that was reported in relation to suicide. Of these 27 young trans people 13 of them reported having attempted suicide at some point in the past. This is where the 48% of all trans youth attempt suicide stat comes from.

We have a number of problems with this study:

There is also disturbing evidence that the transgender charity Mermaids has misrepresented the study to make it appear stronger than it really is. This occurred during a presentation at a conference in front of an audience of lawyers, press, NHS representatives and government officials.

We contacted the lead academic who conducted the research and asked him these questions. He agreed with the limitations of the study that we pointed out. We then asked whether he was aware that his data had been misrepresented by others and presented without making these limitation clear. He agreed it was unfortunate when “research is used by non-scientists in the context of their own agendas” and that he would “continue to clarify the nature and breadth of the RaRE study findings.” 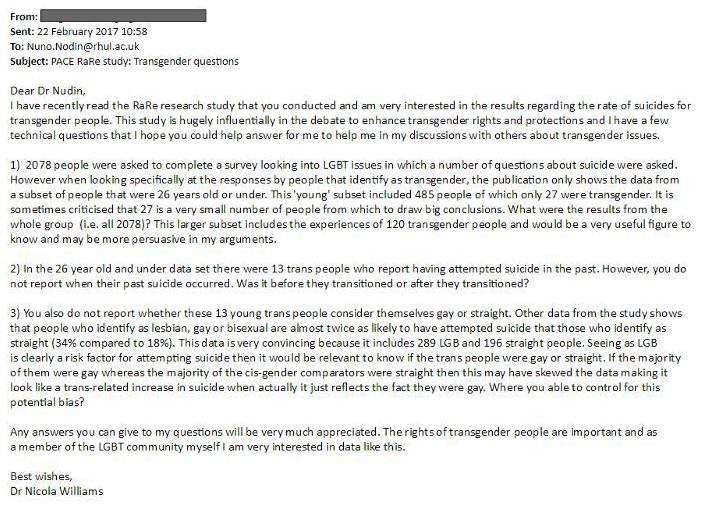 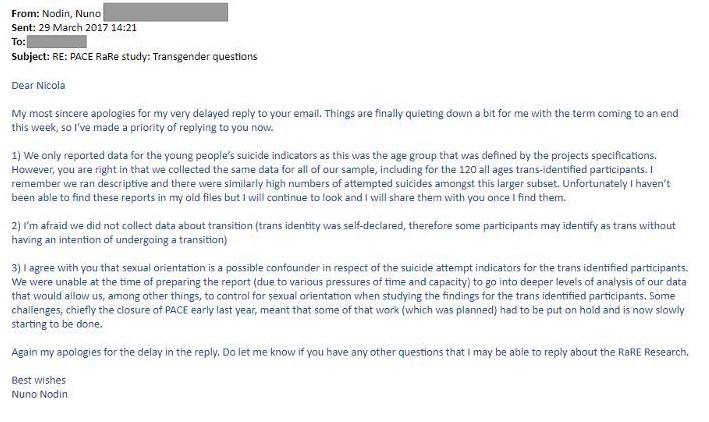 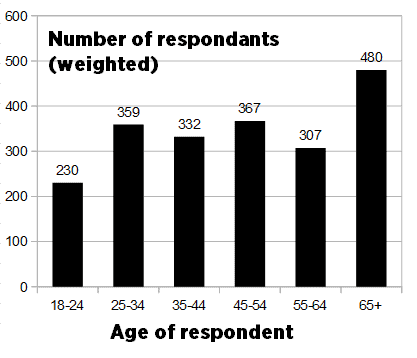 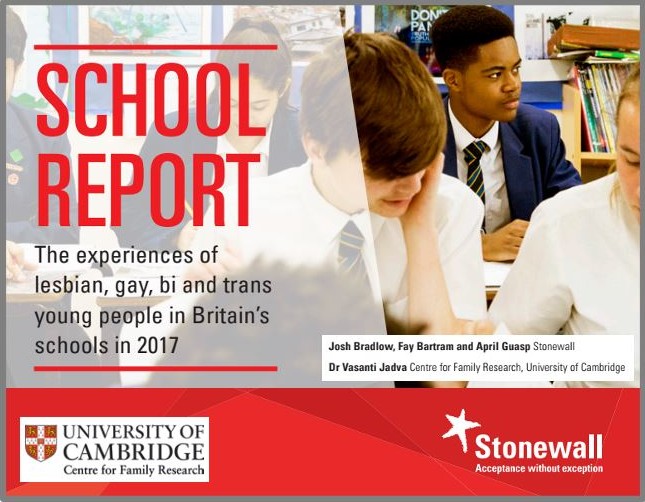 In 2016 Stonewall commissioned the Centre for Family Research at the University of Cambridge to conduct a survey with young people who are lesbian, gay, bi or trans (LGBT), or who think they might be, on their experiences in secondary schools and colleges across Britain. Between November 2016 and February 2017, 3,713 LGBT young people aged 11-19 completed an online questionnaire. Many aspects of LGBT life were asked about in this study. We have summarised the results relating to self-harm and suicide in the table below (Figure 1)

Once again the study was conducted by questionnaire using a non-probability sampling method. This means that the questionnaire was promoted to LGBT students in secondary schools and children chose whether or not to fill it in. In total 3717 questionnaires were analysed and of these 594 were from young people who self-identified as transgender. This is significantly higher than the 27 trans respondents in the earlier PACE study. The reported data shows that transgender young people experience high levels of self-harm (84%), suicidal thoughts (92%) and suicide attempts (45%). However, very high albeit slightly lower levels are seen for the non-trans young people. 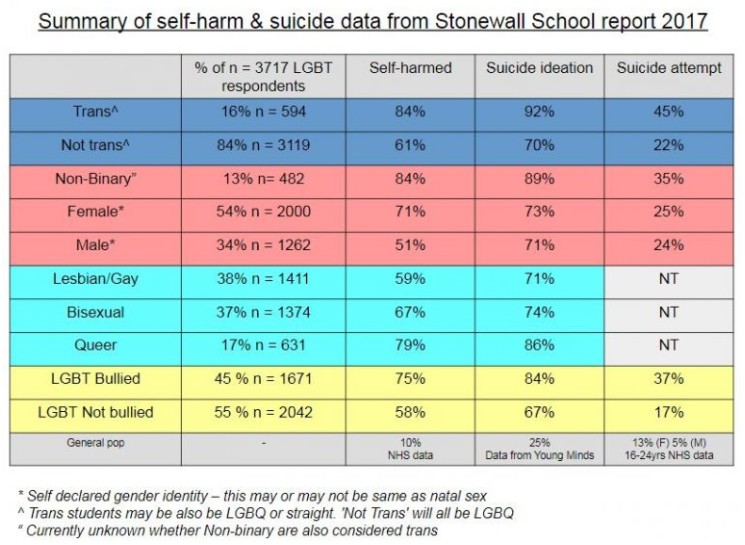 Despite the high number of respondents we have a number of major problems with this study. We asked the lead researcher for a methodology report but none was available. In the absence of such a report we followed up with a serious of detailed technical questions (see Figure 2). However, despite repeated requests no answers were forthcoming. There has also been no publication based on this study in any peer reviewed journal so it is impossible to verify the validity of the results. For these reasons we have serious doubts over the robustness of this study and do not believe the data is sufficiently reliable.

The issues with the study include: 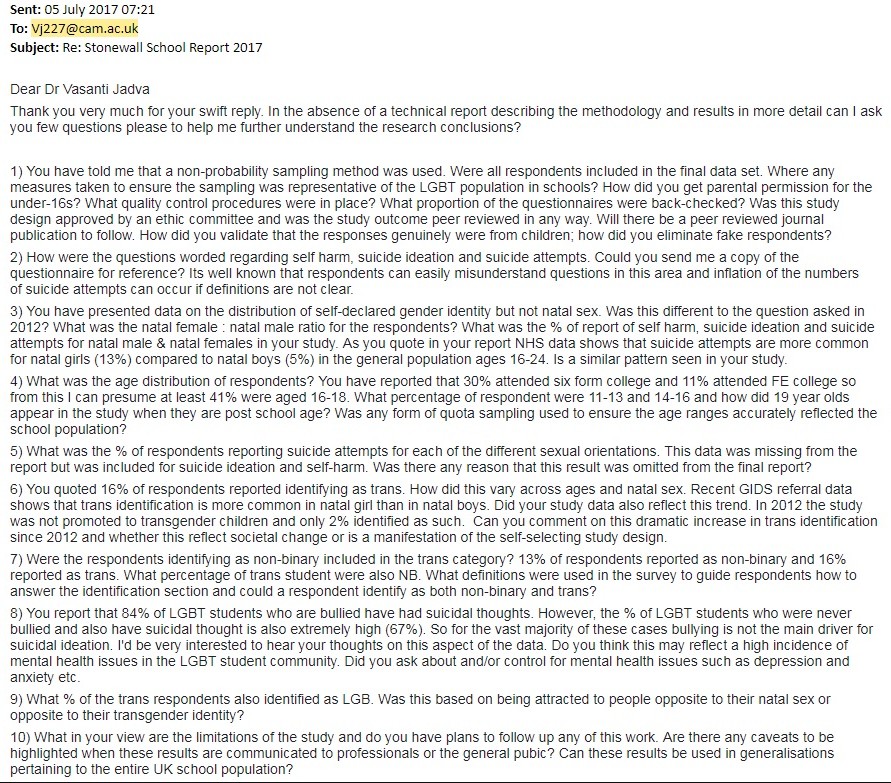 CONCLUSION: There are fundamental methodology issues with both UK studies that report that almost half of transgender young people attempt suicide. This data is poor quality and should not be relied upon by parents when considering how best to support their children. The misuse of suicide figures is ethically questionable.

Our findings were confirmed by the UK Independent Factchecking charity Fullfact, after trans activist Paris Lees made this claim on the BBC 2 Question Time programme in March 2018:

“45% of young trans people in this country, modern Britain, have attempted suicide. Not thought about, attempted.”

“We can’t say how representative this is of the young trans community in Britain as a whole – the overall sample was not adjusted to try and be representative.”

The Tavistock and Portman GIDS clinic states that amongst children referred to the clinic “suicide is extremely rare” (taken from the Tavistock evidence base).

At a conference in Bristol in October 2017, Dr Polly Carmichael, Director and Consultant Clinical Psychologist at the Tavistock clini, stated that the PACE survey is “deeply flawed” and that rates of self-harm, distress and suicidal ideation are similar to CAMHS figures overall. Dr Carmichael’s full talk is available on this page and we summed it up in this thread.

Dr Carmichael expressed concerns about the use of suicide statistics in the discourse around gender dysphoric young people which is so negative, and suggests a lack of agency and resilience.

This is our position. Every suicide is a terrible tragedy and we must be extremely careful in any message we send to young people on this subject. The Samaritans guidance states that we should avoid speculation about any one ‘trigger’ for suicide and that we need to exercise caution in repeating suicide statistics. We would like to see this advice followed more carefully in the case of young people struggling with gender identity issues.