You are here: Home / Law / Sex by deception: respond to the CPS consultation 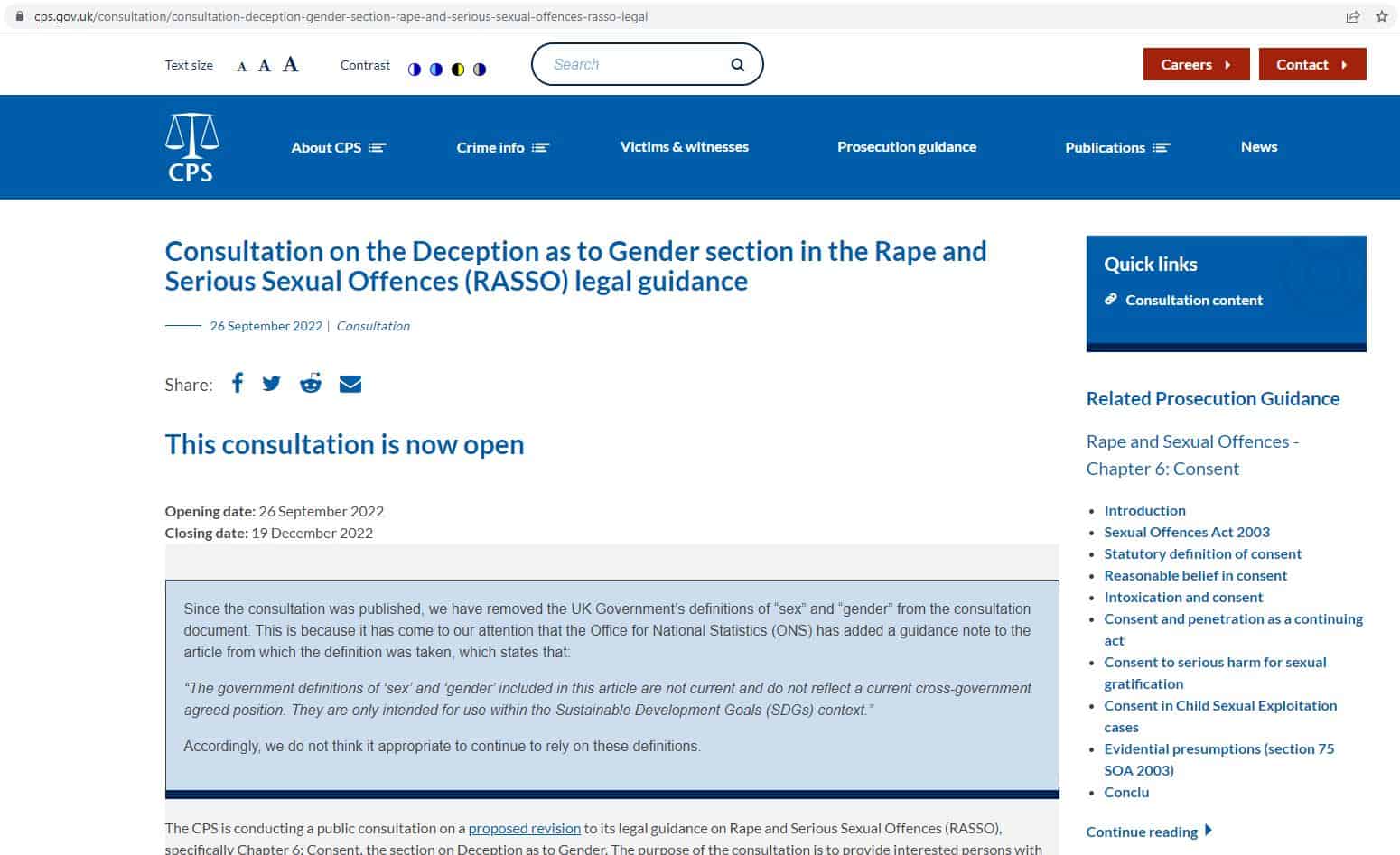 The Crown Prosecution Service (CPS) is conducting a public consultation on a proposed revision to its legal guidance on Rape and Serious Sexual Offences (RASSO), specifically Chapter 6: Consent, the section on Deception as to Gender. By this they mean sex by deception. The purpose of the consultation is to provide interested persons with an opportunity to provide comments and to ensure the final version of the guidance is informed by as wide a range of views as possible. There is a consultation response form with a series of questions for you to answer. Our full response to each question is here. The deadline is 19 December 2022.

Why does this matter?

We believe that justice would be undermined if this proposal were to be passed. The proposal is basically that if a person appears sufficiently genuine in their belief that they are the other sex, this will mean there is no deliberate deception. Hence no case to answer. Contrast that with the prevailing interpretation of harassment, hate crime and non-crime hate incidents where the intention of the perpetrator is irrelevant, and only the perception of the victim, or even a bystander, counts.

All trans-identifying people know that their birth sex differs from their desired sex. Therefore, the deception can only be deliberate. Their only reason for withholding it must be a fear that consent will be withdrawn. In any case, how is their genuineness of belief, or commitment to living as the other sex, to be determined? The guidance also talks about how some people can be gender-fluid so they may present differently at different times. All of this is a free pass to anyone accused of sex by deception.

This proposal also has serious implications for other sexual offences. It proposes to take an “offender-centric approach”. This alone is shocking. But it is even worse in practice, since anyone can claim genuine feelings, thus giving them a defence no one can disprove. The guidance even allows for the absence of evidence to this by saying that “Some trans people may not always be living in their true gender identity due to safety considerations”. So there is always a defence. Maintaining the onus on the potential offender in cases of sex by deception is very important. Otherwise we are making victims responsible.

The proposal to take age into account, being more lenient or dropping cases against younger offenders, is also very concerning. The age of legal responsibility is established, as is the age of consent for sexual intercourse. This cannot and should not be varied at will for people who represent themselves as the other sex.

This proposal is a serious threat to justice for victims of sex offences. Prosecution for sexual offences is desperately low. Official guidance that excuses a perpetrator is the last thing we need.