You are here: Home / Scottish GRA reforms / Like a thief in the night: The Scottish bill that stole the word woman

Last year while we were all looking the other way and distracted by the UK government’s proposals to reform the Gender Recognition Act the word woman was stolen from us. It was sneakily done by the Scottish parliament and hidden behind a smoke screen. That smoke screen was The Gender Representation on Public Boards Bill.

The Bill introduced the ‘gender representation objective’ – a target that women should make up 50% of non-executive board membership.

The purpose of this bill was admirable. It was to help women overcome the institutional sexism we suffer due to our sex. Positive action to redress the imbalances that have arisen from centuries of historical disadvantage. It was to acknowledge the reality that institutionalised inequality and sexist attitudes stop most women from reaching their full potential in public life. Financial barriers, income inequality, the gender pay gap, sexist attitudes, gender stereotyping, women’s disproportionate share of caring responsibilities, the undervaluing of women’s paid work, and media portrayals of women, to name but a few influences, all play a role in the sexism that prevents a fair number of women being involved in public life.

But in a cruel twist of irony it was also to be the perfect trojan horse to steal the very meaning of the words woman and female from us.

It all started early last year. The Scottish Government consulted on the draft bill between 5 January 2017 and 13 March 2017. Quietly and without fanfare. Non existent media coverage. No one was that bothered. Only 101 responses to the consultation, 66 from groups or organisation and 35 from individuals. Compare this to the >15000 responses received for the Scottish consultation for reform of the Gender Recognition Act this year. This one slipped by unnoticed.

The draft bill was transgender inclusive and included this:

(a) 50% of non-executive members who are female or who identify as female, and

(b) 50% of non-executive members who are male or who identify as male.

But this still wasn’t enough for the transgender lobby.

The Scottish Trans Alliance wanted to remove the phrase ‘who are female’ and ‘who are male’, so as not to create a legal difference between those ‘who are’ and those ‘who identify as’ male or female. They got their way. They always do.

Mary Fee MSP (Scottish Labour) proposed an amendment and it was accepted. The Bill was changed to instead simply refer to ‘women’. No mention of those who are female. No mention of the phrase ‘who identify as’. Just the word women. The same word women that the general public know to mean adult females. The same word defined in the Equality Act 2010 as ‘meaning female of any age’.

This was a clever trick. Everyone knows what woman means don’t they. Why would any unsuspecting politician or member of the public be alarmed by a bill that stated on its first page that its objective was to have 50% who are women.

But this definition of woman also included men.

Hidden in the small print of a bill was a few lines of text which undermines everything women have fought for. For thousands of years women have had to struggle for their rights. We’ve had legal equality for a heartbeat in the Western world and now this.

If that wording sounds familiar that’s because it is. It’s basically the exact same wording used in the Equality Act 2010 to define a transsexual person. It is the criteria by which someone falls under the protected characteristic of gender reassignment. This is what protects transgender people from being discriminated against because they are trans.

They have replaced that linguistic mouthful ‘for the purpose of reassigning the person’s sex by changing physiological or other attributes of sex‘ to the simple and easy to remember phrase ‘becoming female’.

No longer is that definition a reference to a ‘transsexual person’ but now as if by magic it’s a reference to ‘a woman’. Who was consulted about this? Who agreed to this change? How dare they wipe away the meaning of a word without our informed consent?

‘Woman’ is now to include men who ‘become female‘. No definition of how though. Not surgery that’s for sure. No medical supervision required. No diagnosis of gender dysphoria. To wish it is to become it. To speak it is to become it.

This definition is so broad that it can include anyone.

There were a few witnesses to this theft. The Equality and Human Rights Commission (EHRC) is the powerful independent body who oversees the Equality Act 2010. They saw the sleight of hand. They said:

“gender does not align with definitions in the Equality Act 2010. Sex and gender are not synonymous terms. ‘gender’ is not a protected characteristic”.

The amended bill made its way smoothly through the Scottish process and the final text reached stage 2 and put before the select committee. Six people; three men and three women. How lovely it is to see three men and three women sitting on this important committee. The perfect balance of male and female reflecting the society we have always lived in. Don’t blink or you’ll miss it.

This is the committee that approved the text that says ‘women’ now includes men who wish to be women. One of those women was Mary Fee from Scottish labour. The woman who proposed the amendment now voted to approve it and wave it through. 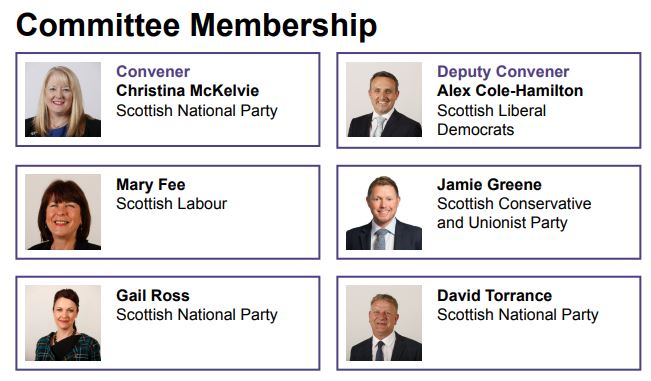 Once approved by the Committee it was voted on by the Scottish Parliament.

All the tories voted against. Not in protest of the change of the meaning of the word woman. But because they disagreed in principle with giving women equal representation on a board. 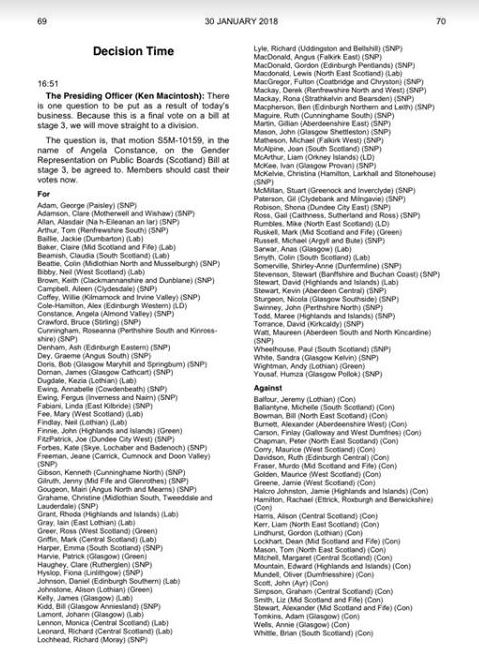 One of Alex Cole-Hamilton’s friends posted a question for him on facebook today. Alex was the vice-convenor of the committee. One of six people who approved the final bill.

He was asked what “becoming female” and “living as a woman” might mean, given these phrases are crucial to making sense of the passed bill. He replied back:

“This Act proceeds forthcoming gender recognition legislation. Parliamentary drafters and lawyers chose this language in anticipation of definitions as they are being drafted for the future Bill which should make everything clear in statute.”

So there we have it. Confirmation that the wording of this legislation was passed in anticipation of future changes to Gender Recognition law in Scotland.

The same Gender Recognition law that thousands of women have just submitted their views on in a consultation process. The consultation process hadn’t even closed when they passed this bill on 30th January 2018! How can this be? Can Scottish politicians see into the future and see the text of a new law that has not even been consulted on or drafted yet? No. They know where they are heading and they don’t think anyone is going to try to stop them. They think they can just do whatever they like.

Time and time again Scotland has been used as the testing ground for laws that eventually comes crashing into the whole of the UK. Controversial laws get a foothold in Scotland first and then it’s an easy sledge ride down the slippery slopes into England and Wales.

We mustn’t get distracted and just focus on the UK. We must ALL be aware and care about what happens in Scotland. The Scottish public aren’t fully aware of what’s happening yet. It’s not in the mainstream media. We have to change that. We have to ALL make some noise in Scotland.

Don’t just leave it up to Scottish women.

This impacts us all.