You are here: Home / Toilets & Changing rooms / My daughter doesn’t want to share toilets at school with boys. What can I do? 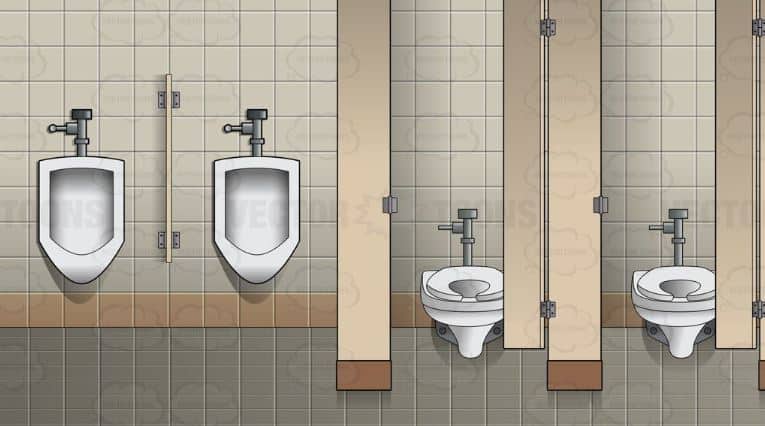 Does my school have to provide separate toilet blocks for female and male children?

The Schools Premise Regulations (2012) states that there must be separate sex toilet provision for children over the age of 8 years old. 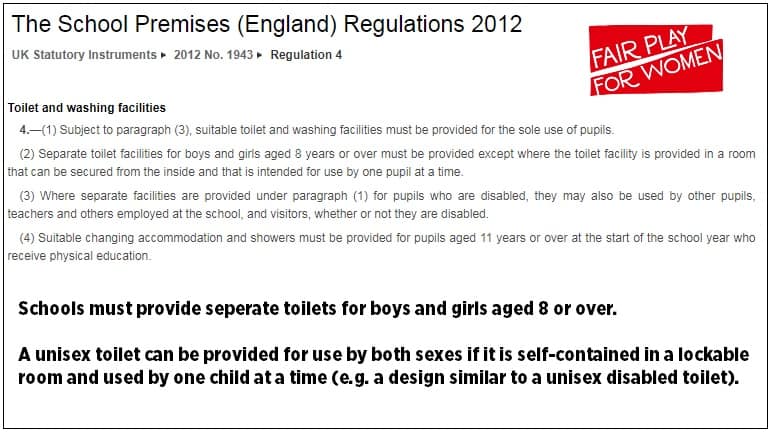 It is very clear that the use of the terms ‘boys and girls’ was intended to refer to male and female children and the separation of toilets based on their shared protected characteristic of sex. This was confirmed in 2018 by the Department of Education in guidance here.

Does my school have to allow male children who identify as girls access to the girls toilet block?

If a boy identifies as a girl at school they will be covered under the protected characteristic of Gender Reassignment. This means they must not be treated unfairly compared to other children because they identify as transgender. However, that does not necessarily mean they must be given access to the toilets for female children.
Children (under the age of 18) are not able to legally transition their sex (they can’t get a Gender Recognition Certificate or change the sex marker on their birth certificate) so this means all children legally remain the sex they were born irrespective of how they identify. So a boy who identifies as a girl is still considered male. The EHRC clarified this in 2018 here.

The Equality Act 2010 sets out a number of ‘single-sex exemptions’ which makes it lawful to exclude all males from a female-only space as long as it can be objectively justified. It has long been recognised in law that there are times when women and girls need and want a male-free space for reasons of privacy, safety and fairness.
This means your school could choose to implement a policy to provide female-only toilets and changing rooms and it would be lawful if the school can demonstrate that this policy is a proportionate means to achieve a legitimate aim (to achieve privacy, dignity and safety for the female children).
It may be argued that a single-sex toilet and changing policy disproportionately impacts male children who are also covered by the protected characteristic of gender reassignment – this is called indirect discrimination. However, this indirect discrimination could be lawful as long as the school can show it has minimised any adverse impact as much as possible.
Forcing a male child who identifies as a girl to use the boys toilets might not be considered by the court as the least discriminatory option. Instead any adverse impact could be minimised by allowing them to use alternative facilities (e.g. staff or disabled facilities). This compromise could be argued to be the fairest and least discriminatory solution to uphold privacy and safety for everyone involved; the girls get the privacy of a female-only space and the transgirl maintains their privacy and dignity by not having to use a male-only space.
It’s worth noting that if a school decides to implement a single ‘gender’ toilet and changing room policy (based on gender identity rather than sex to allow transgirls to access spaces for girls) then this too could be considered indirect discrimination. This time against the girls. It could be argued that a single ‘gender’ policy impacts the female sex more than the male sex hence indirectly discriminating against the girls. Introducing trans inclusion policies without demonstrating due regard of the impact on all the protected characteristics could potentially risk a discrimination claim.
The best way to ensure any school policy is not discriminating unfairly is to do an Equality Impact Assessment. This means documenting the impact (negative or positive) on each of the nine protected characteristics in turn. Confidentially consulting with the girls (so they can answer truthfully) is a way to collect Equality evidence. (e.g. would girls self-exclude from the toilets if male children are also allowed to use them). The objective of the EIA is to enable a school to make an evidence-based assessment of the policy to ensure it is the least discriminatory option taking all children into account.
You can ask your school to show you a copy of the Equality Impact Assessment for its toilet and changing provision for pupils and the Equality evidence it used to underpin its policy.

You can find more information on single-sex toilets in schools by visiting Safe Schools Alliance  and Woman’s Place UK.

For more information on changing rooms you can read our policy guidance for service providers here.