You are here: Home / Sport / Rowing policies make no sense 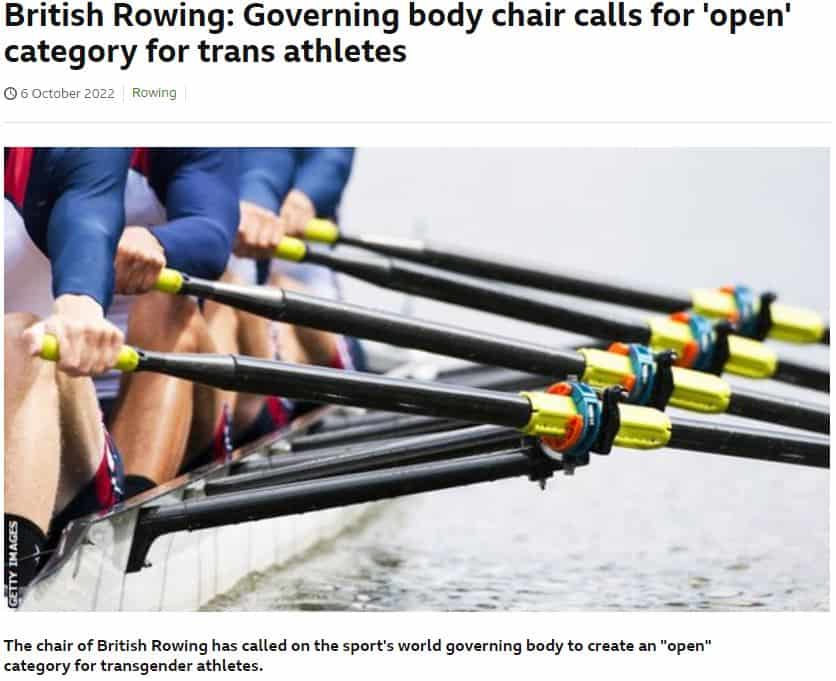 Transgender inclusion policy is about finding a place in sport for people who reject their natural place in sports organised according to the sex binary, based on their male or female body. But it’s also about who is eligible for the female category, specifically, whether non-females should sometimes be allowed in if they say they are women. This makes it women’s business. The female category exists to ensure fairness of opportunity for those who lack all the male performance advantages conferred by a testosterone-driven puberty. Identity has never been a factor. A look at transgender inclusion policies in one sport, rowing, shows how confused the decision-making has become.

Rowing is very much a “gender-affected” sport, with separate men’s and women’s events at all levels. The UK and the USA are two of the major rowing nations, and they have recently published updated transgender inclusion policies. These policies are quite different.

British Rowing allows males into female events, provided they reduce their testosterone. This means they know males have an advantage, otherwise why the testosterone suppression. The policy states “Our aim in the following criteria is to be inclusive of trans or non-binary people, as far as is possible, whilst balancing fairness in competition.” But the Sports Council guidance says there is no balancing fairness and inclusion. Governing bodies have to choose. All the evidence says testosterone suppression in adult males removes only a little of their advantage over females. This isn’t surprising, since puberty changes both male and female bodies in many ways. Circulating testosterone in adult males is not required to maintain those changes; men don’t shrink, lose their deep voices or grow a wider pelvis if testosterone is suppressed. So, British Rowing knows there is male advantage and makes a token effort at fairness. Its rationale is that World Rowing uses this policy. But World Rowing operates elite events only, with active anti-doping and compliance measures at every event. By contrast, almost all rowing events in the UK are run by volunteers, with no testing and no proof of identity, never mind testosterone levels.

US Rowing goes for self-identification

If the British Rowing policy looks bad, have a look at US Rowing’s new policy.  You pick your “gender” at the start of the season, and you’re done. No more fair racing for females then, because any male can declare themselves a woman and race in women’s and girls’ events.

There is one exception in the US Rowing policy. It is for mixed crew races, which require equal numbers of male and female rowers in each boat. In those events, the females must be “assigned female at birth”. Yes, they can see that letting males claim female seats in the boat gives that crew an unfair advantage, but in this case it affects their male opposition, so it’s not allowed. This means that a single trans-identifying male could be counted as a woman in one race and as a man in another, at the same regatta, on the same day. It’s hard to imagine the discussion that concluded that female events can include males who say they are women but in a mixed crew those males will be counted as men. Didn’t someone cry “transphobic”?

No chance of fairness for junior girls, or for women

For under 16s, both US Rowing and British Rowing allow self-ID. They must know that top boys are faster than female world champions. In indoor rowing, the women’s world record for 2k is 6:21.1. The male record for the 13-14 age group is 6:16.7. US Rowing of course allows self-ID for all ages, not just under 16s. So every female national indoor record-holder can expect to be replaced by a male soon enough, because that male doesn’t have to be very good. Being male gives on average a 10% advantage over a woman of the same age and ability. There are hundreds of male rowers who can beat the fastest woman in their age group.

British Rowing ignored UK law which permits sex-based sport and followed World Rowing instead, with pointless testosterone suppression as a fig leaf for fairness. Even “non-binary assigned male at birth” are now welcome in women’s events. Why would they want to? If it’s all about identity, this should never arise.

British Rowing doesn’t need to do this. Their two categories are Open and Women’s. Anyone can race in Open without restriction. No need to declare your sex or identity. This Open category provides a handy back-up option for male trans and male “non-binary” who miss their testosterone limit, as the policy cheerfully points out. There isn’t a Men’s category in British Rowing events, but that doesn’t stop men from racing; presumably their gender identity is deemed irrelevant.

Unlike British Rowing, US Rowing didn’t follow their world federation. They both had a choice. Both, with different policies, have removed fairness for females. All women’s races can now be mixed sex, while US Rowing keeps men’s racing fair, whether men’s events or mixed.

Of course there are appeal processes if you think it’s not fair. But only for the trans competitors, not for females. This alone shows how one-sided the thinking is. In any case, umpires have been given no guidance or training on these policies, or how to respond if they see a male in a women’s race. The British Rowing policy has a heavy-duty statement about confidentiality which would give anyone pause – though it’s never clear what secret is being kept.

Gender identity trumps sex even in allocating overnight accommodation. No privacy for girls then. US Rowing policy recommends recording gender identity – and “what are your pronouns” – instead of sex. British Rowing also has a section explaining that “Pronouns are words that stand in place of a name such as she/her he/him they/them per/pers. If you are not sure what pronouns to use, offer your own pronouns first, and then use gender-neutral language.” Perhaps the first time ever that a sporting policy included a grammar lesson, followed by one on etiquette. By contrast, the implications for safeguarding are not considered. This is par for the course when it comes to transgender policies in sport. British Rowing’s confusion is apparent when its policy refers to people “whose gender identity was not female at birth”. How would one know a baby’s gender identity?

What a dog’s dinner. World Rowing, US Rowing and British Rowing all have different policies. They can’t all be right. What they have in common is they all make women’s events open to males. Gender identity & expression is irrelevant in sport. It’s bodies that move boats, not hair and nails. Of course there are no issues with females who identify as men competing in the Men’s events in the USA or in the Open events in the UK. Nor is the lack of a validating Men’s category seen as a problem for them.

We know there are males of all ages racing in women’s crews at all levels. Every seat is taken from a woman or a girl. Most sport is not Olympic, or for money. It’s for personal satisfaction and enjoyment. Do women and girls deserve that less than males who feel they are women? What is fair sport if not rules-based? With these policies, the women’s indoor world record could be claimed by a teenage boy or a man in his fifties. No hormones or legal documentation required, just a declaration that he feels like a woman. Whether this happens or not is irrelevant. Rules that allow it are clearly not fit for purpose.