You are here: Home / Sport / Some argue that sport is a human right – but the spirit of fair play must prevail

A BBC journalist has recently written an article in which he interviews two transgender athletes; Hannah Mouncey and Rachel McKinnon. Both athletes justify their inclusion in female sports based on their human rights. We thought it would be useful to look at sport and human rights in a little more depth.

Sport is not protected legally as a universal human right

It is important from the outset to understand that none of the United Nations international human rights declarations or covenants, which have legal status for all ratifying countries, include the specific ‘right to sport’. The international human rights framework comprises the Universal Declaration on Human Rights (UDHR) the International Covenant on Civil and Political Rights (ICCPR) and the International Covenant on Economic, Social and Cultural Rights (ICESCR). In addition the Convention on the Rights of the Child (CRC) has been ratified by, and is therefore legally binding in, every country except Somalia and the United States of America.

Although sport is not protected legally as a universal human right it might be considered to be subsumed under broader human rights categories. For example Article 24 of the UDHR relates to the right to rest and leisure, Article 12 of the ICESCR to ‘the right of everyone to the enjoyment of the highest attainable standard of physical and mental health’ and Article 15 to ‘take part in cultural life’. In addition, Article 31 of the CRC recognizes ‘the right of the child to rest and leisure, to engage in play and recreational activities appropriate to the age of the child and to participate freely in cultural life and the arts’. Importantly, these rights do not necessarily relate to elite sport as this is by definition exclusionary and admits on the basis of eligibility and qualification.

However all the UN international human rights declarations and covenants explicitly enshrine equal rights between the sexes. For example, Article 2 of the ICCPR refers specifically to respecting rights regardless of sex and Article 3 is even more explicit referring to the ‘equal right of men and women to the enjoyment of all civil and political rights set forth in the present Covenant’. The ICESCR addresses socio-economic and cultural rights locating individuals within a social structure and working towards a more equal distribution of socio-economic and cultural goods services and opportunities. In Article 2 it refers explicitly to removing discrimination on the grounds of sex. The CRC requires States to ‘respect and ensure the rights set forth in the present Convention to each child within their jurisdiction without discrimination of any kind’ and specifically refers to sex.

The Olympic spirit of sport is all about fair play

This is the context in which the International Olympic Committee (IOC) Charter 2018 outlines the 7 Fundamental Principles of Olympism. Principle 4 does indeed refer to ‘sport as a human right’ but goes further and requires ‘no discrimination of any kind’ and ‘mutual understanding with a spirit of friendship, solidarity and fair play’. This goes to heart of the concept of universal human rights since classically an assertion of the rights of one person requires from them the recognition of equal rights for everyone else.

This is why Principle 1 includes ‘respect for universal fundamental ethical principles’ and Principle 6 sets out that ‘The enjoyment of the rights and freedoms …shall be secured without discrimination of any kind’ and specifically refers to sex. Further Mission 1 of the IOC outlines ‘that in sport, the spirit of fair play prevails’ and Mission 8 is specifically ‘to encourage and support the promotion of women in sport at all levels and in all structures with a view to implementing the principle of equality of men and women’.

The IOC Code of Ethics 2018 elaborates further and reiterates the importance of ‘Respect for the Olympic spirit, which requires mutual understanding with a spirit of friendship, solidarity and fair play’ and ‘respect for international conventions on protecting human rights’ which are outlined above. The Basic Universal Principles of Good Governance of the Olympic and Sports Movement also outlines that ‘fairness and fair play are central elements of the competition. Fair play is the spirit of sport.’

Fairness between the sexes in sport

The IOC has done much work in relation to fairness and equality between the sexes and outlines the history of women’s participation in the Olympics from the outset of the games over a century ago when only men could participate, to the 2014 Winter Olympics where 40% of competitors were women, and the Rio 2016 Games where women were 45% of athletes. The IOC’s Promotion of Gender Equality in Sport initiative conflates sex and gender on occasion but clearly states

‘Sport is one of the most powerful platforms for promoting gender equality and empowering women and girls. As the leader of the Olympic Movement, the IOC has an important responsibility to take action when it comes to gender equality – a basic human right of profound importance and a Fundamental Principle of the Olympic Charter.’

The fascinating timeline of key dates in the history of women in the Olympic Movement shows that women participated in the Games for the first time in 1900 and made up 2.2% (22 women) of the athletes competing in tennis, sailing, croquet equestrian and golf. In more contemporary times bobsleigh became open to women’s participation in 2002 followed by golf and rugby in 2006 and boxing in 2012.

Anti-discrimination legislation is well established in law in many countries and in the UK for example is covered by the Equality Act. This permits the exclusion of people with the protected characteristic of gender reassignment from single sex sport for the purposes of (a) fair competition, or (b) the safety of competitors. It further outlines the circumstances in which this might be necessary as ‘a sport, game or other activity of a competitive nature in circumstances in which the physical strength, stamina or physique of average persons of one sex would put them at a disadvantage compared to average persons of the other sex as competitors in events involving the activity.’ The importance of this element of the Act is that it acknowledges the potential for indirect discrimination in unisex activities in relation to the protected characteristic of sex and therefore the necessity for single sex activities to ensure women are not discriminated against in sport and achieve equality.

Consequently, the right to sport is not the right for any given individual to play in any sport in any category at any level, but instead is contingent on the central importance of both non-discrimination explicitly referencing sex, and of fair play, fair competition, and a level playing field.

Any sporting contest needs to be constructed so as to be as fair as possible. As such the primary purpose of the Governing Bodies of Sport including the IOC and the International Federations of Sport is to ensure a fair competition and a level playing field for participants by devising the rules of the game.

Different sports have different qualification and eligibility criteria including rules in relation to competition categories such as age and sex. Many but not all sports have single sex categories to ensure women are not discriminated against by virtue of the well-established significant differences between females and males in a range of anthropometric, physiological and performance measures. These differences are based on the average measure of any variable between the two sex categories.

For example the International Volleyball Federation Official Volleyball Rules for 2017-2020 state in clause 2.1 that ‘there is a net whose top is set at the height of 2.43m for men and 2.24m for women’ thus acknowledging the significant different in height between females and males. In this example, where height is a competitive advantage, even though the height distribution for women and men overlap, elite performers will tend to be as the top of the height range for each sex. It is only by acknowledging the statistically significant biological differences between women and men that sport can avoid indirect discrimination against girls and women.

Single sex sport tends to be the rule rather than the exception for sound biological reasons and ensuring fair competition for females has enabled the phenomenal increase in the % of women competing in both the Winter and the Summer Olympic Games although equality has still not yet been achieved. 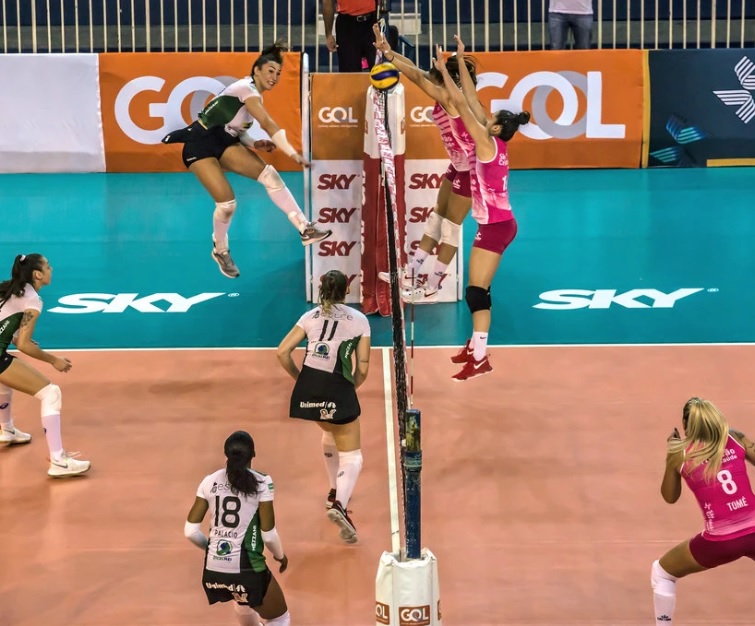 Thirty-three-year-old, 6′ 3″ tall Brazilian volleyball player Tifanny Abreu is expected to be one of the first male-born transgender athletes competing in female matches in the Olympics at Tokyo 2020.

Given the importance to women’s sport of a level playing field, fair play and dismantling indirect discrimination, the question of how to classify transgender athletes is difficult. At present the IOC Transgender Guidelines appear contradictory. On the one hand, the central principle of fair competition is upheld and Point D affirms ‘The overriding sporting objective is and remains the guarantee of fair competition’ and crucially that ‘Restrictions on participation are appropriate to the extent that they are necessary and proportionate to the achievement of that objective.’ On the other hand, the IOC outsources decisions on how to interpret Point D to the International Federations of Sport by stating ‘In this spirit, the IOC Consensus Meeting agreed the following guidelines to be taken into account by sports organisations when determining eligibility to compete in male and female competition’ and then outlining the following:

1. Those who transition from female to male are eligible to compete in the male category without restriction.
2. Those who transition from male to female are eligible to compete in the female category under the following conditions:
2.1. The athlete has declared that her gender identity is female. The declaration cannot be changed, for sporting purposes, for a minimum of four years.
2.2. The athlete must demonstrate that her total testosterone level in serum has been below 10 nmol/L for at least 12 months prior to her first competition (with the requirement for any longer period to be based on a confidential case-by-case evaluation, considering whether or not 12 months is a sufficient length of time to minimise any advantage in women’s competition).

These IOC transgender guidelines are not based on robust scientific evidence necessary to ensure fairness of competition. They appear to have been simply ‘borrowed’ from the rules set down for DSD/intersex athletes (rules that are similarly lacking a solid evidence base). The threshold level of 10 nmol/L Testosterone is set at ten times higher than the average level in females. The rules also take no account of performance advantages that persist following past exposure to Testosterone.

The right to sport is contingent on the central importance of fair play and removing both direct and indirect discrimination in particular in relation to sex as outlined in a range of international human rights instruments and equality law.

This is of paramount importance for the future of girls and women’s sport. The IOC Transgender Policy is unsatisfactory in this regard given it acknowledges implicitly that there are biological reasons for retaining single sex sport but then suggests incomplete criteria for the inclusion of transgender athletes in women’s sport by addressing testosterone levels only.

Until robust scientific evidence exists showing that male-born transgender athletes do not bring male-competitive advantage into the female game, eligibility must remain wholly based on biological sex. To do otherwise would be to undermine the most basic principle of sport: FAIR PLAY.

Aaron Smuts, Associate Professor and Chair of the Department of Philosophy at Rhode Island College, elegantly dissects the different arguments around fairness when it comes to transwomen in female sport here. 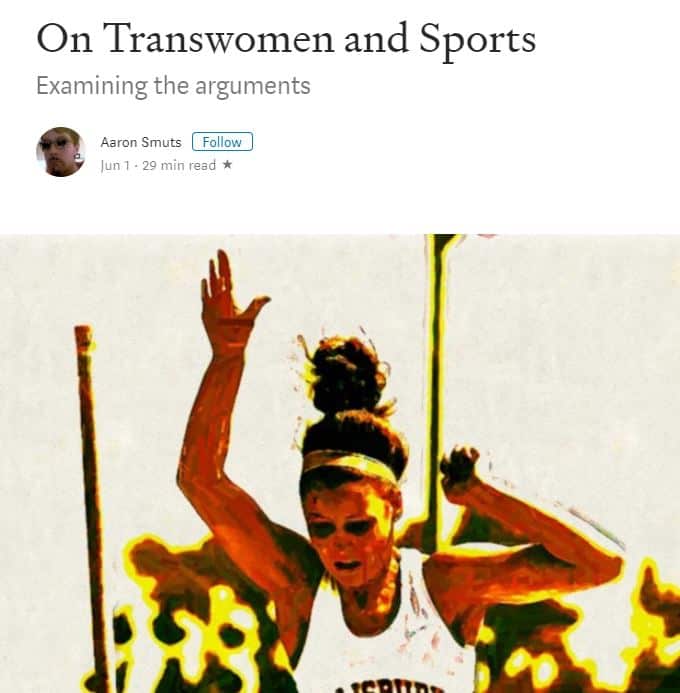