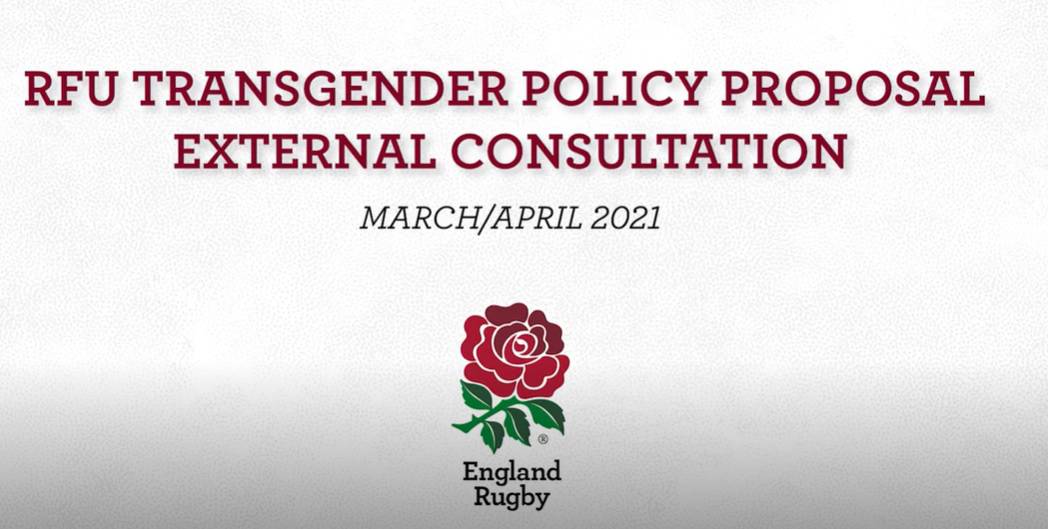 Today England Rugby has launched a two-week external consultation on its proposed transgender inclusion policy. A link to the survey and a promotional video to accompany the draft policy can be found here. Our submission to the consultation is here.

In contrast to the World Rugby decision to restrict elite women’s rugby to female players only, the RFU will continue to allow male people who identity as women to play community women’s rugby.

In their promotional video they say:

“The policy aims to strike a balance between fairness, inclusion and safe participation.”

“The RFU has considered measures to safeguard and mitigate as far as reasonably possible any risks to players”.

Here’s the problem. “Striking a balance” means accepting a trade-off in safety and fairness for one group (female players) to enable the inclusion of another group (male-born trans-identifying players).

They also say something quite silly and disingenuous

“While this may indicate a potential performance advantage, up to this point research does not suggest that size has an effect on injury risk”

It’s the disparity in size and strength that matters – something that is more likely to happen when males and females are on the pitch together.

“We understand there are several misconceptions about transgender participants in rugby as well as in wider society”.

They do not elaborate on what these misconceptions might be.

They admit males do retain an advantage but tell us it’s too difficult to measure.

170 cm (5’7″) is pretty short for an adult male so for most transwomen this will trigger a ‘coach assessment’. Sounds promising but they provide no details on how the RFU-appointed coach will assess the potential for “safety risk”‘ or “performance advantage”

“Such assessment must be completed to the satisfaction of the Panel”

They make no reference to how much “safety risk”‘ or “performance advantage” is considered too much. This policy fudge is both undefinable and unimplementable. It’s unlikely the panel would ever dare exclude someone and risk having to justify that decision in court.

So what may look at first glance to be a step towards protecting safety and fairness for its female players, is nothing more than a fig-leaf. RFU has simply taken its decision making process behind close doors making it both unaccountable and unchallengeable.

They also fudge things for children playing rugby. No clear rules at all meaning the panel has the discretion to allow teenage males to bypass the testosterone requirement and play age-grade rugby with girls.

“For age-grade players, a more flexible approach to the application process may be taken by the panel”

This is in direct conflict with its own very strict sex-based safeguarding rules for rugby. The RFU’s Age-grade Code of Practice states mixed-sex rugby is only permitted until age 11. The trans policy undermines this important safety principle by facilitating mixed-sex games for children over the age of 11.

The RFU also gives the panel discretion to allow female players who identify as men to take testosterone and still play in the WOMEN’S game. This goes against anti-doping rules and presents yet more safety and fairness concerns for the other female players.

So that’s 7 male players and up to 4 females on steroids currently playing women’s contact rugby. Plus there is no obligation on a player to inform the RFU of their trans status. So how many new players simply turn up and register as women and play under the radar. 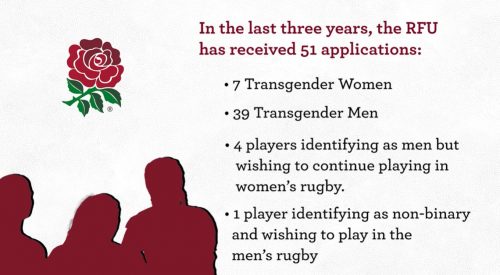 In conclusion, this draft policy tries to do the impossible and inevitably fails. There’s simply no known method to reliably monitor and ensure safety and fairness for females while also allowing some males to play women’s rugby.

This is after all why we have male and female teams in the first place. Separating by sex already delivers the fairness and safety women need to be included in rugby.

World Rugby understood this. Disappointingly, it seems RFU do not.