You are here: Home / Guest posts / Are Lesbians Welcome at Pride? The answer at Lancaster Pride is no. 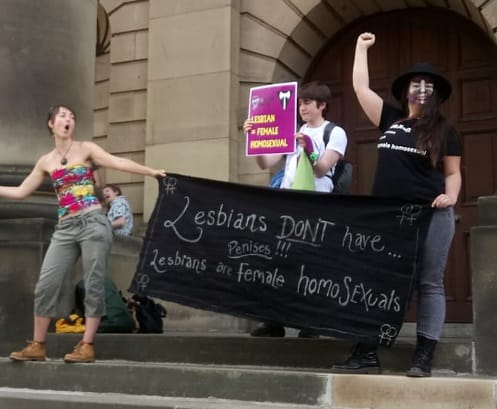 We are a group of lesbian women (and a couple of allies) from Lancashire and Greater Manchester Resisters who attended Lancaster Pride on June 22nd to demonstrate support for lesbian visibility and protest the pressure on lesbians to accept people with penises as dating partners. We faced a barrage of hostility, which, shockingly, was supported by Pride organisers, and members of the LGBT establishment.

You can watch a full video of the protest here.

We came with banners bearing the simple messages: “Lesbians are female homosexuals,” and “Lesbians don’t have penises,” and stood on the steps of the Town Hall. We were not in the way of anyone, but wanted our message to be heard, as members of the LBGT community. 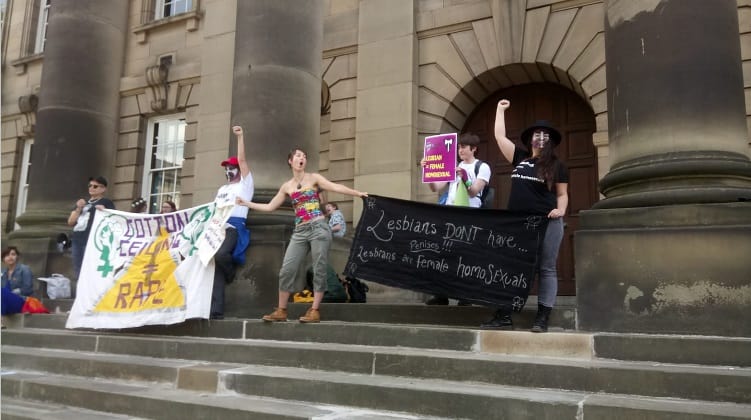 We conducted our protest peacefully, using a handheld megaphone to speak from our vantage point of high visibility across the main square. All of our speech was factual and did not express hate, or include swearing or personal insults. We called out, ‘lesbians matter!’ ‘Lesbian rights matter,’ ‘lesbians don’t have penises’ and, ‘pro woman not anti trans!’

Initially, passers-by mainly watched and listened, then people started to approach us to try to get us to desist in an initially condescending, then increasingly aggressive manner.

A crowd began to gather on the other side of the road, making rude hand gestures, shouting and swearing angrily at us. Within minutes, around 40 people had surged right to the top of the steps, and surrounded us, chanting over us, and holding up flags to block our signs from public view. 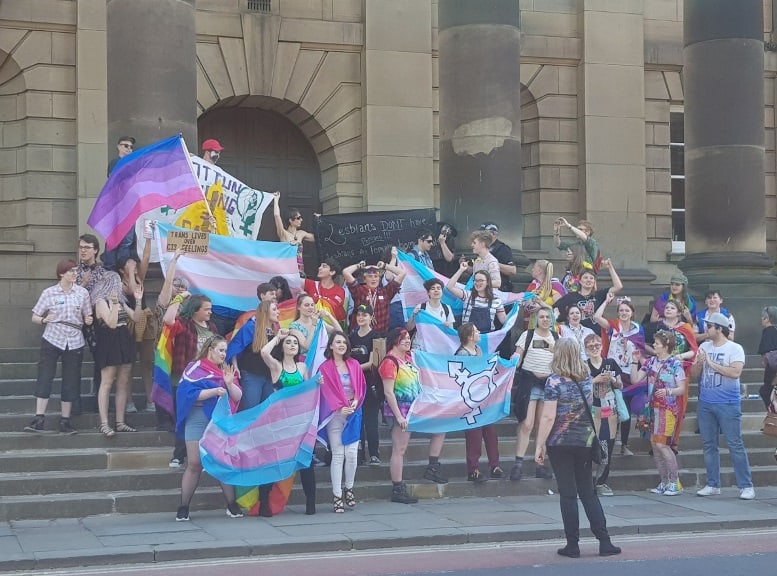 Local aspiring Labour politician Dominic Casoria boasted on twitter that he led the group to “stand in front of the transphobes” and “drown them out”. This tweet got 4,000 likes including from many luminaries of the LGBT establishment. 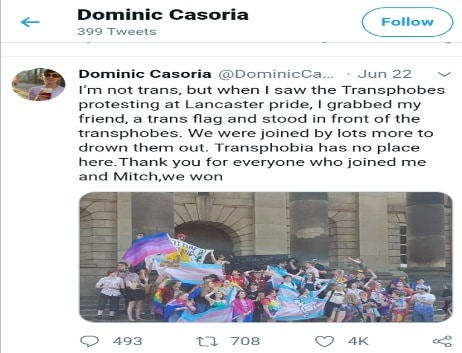 Jan Gooding, the Chair of Stonewall tweeted, “thank you. Exactly the right instinct!”.

Steve Taylor, Board Member of Europride and and Head of Special Projects at Pride in London tweeted “My #Pride heroes of the day are the amazing young people at @LancasterPride who surrounded the transphobes to obscure them from view”.

Pamela Richie of the Women’s Equality Party said, “I’m grateful to people standing up to hate speech in our streets in a peaceful way.”

However as the video shows we were simply a small group of lesbian women calling for the sexual orientation of same-sex attracted females to be respected. There was no hate speech. Female homosexuality should not be an unutterable taboo, especially within the very community tasked with representing us.

Contrary to the many laudatory messages on Twitter, the atmosphere of the counterprotest was neither peaceful nor respectful. Nor did it appear to be spontaneous. While most of the people who surrounded us were teenagers seemingly excited to be part of a protesting tribe, it is evident from the video that there are older people who come in through the back of the crowd and encourage them. “Miss Ivy Rose” a drag queen who was part of the official entertainment also leads the young people in the chant ‘Transwomen matter!’

While most of the teenagers simply repeated the chants they were given, other protesters grabbed at our banners. We were spat at by an adult woman and her Trans partner and some protestors screamed confrontationally in our faces. One male individual attempted to wrestle our megaphone away. The police did not control the situation and did not keep a buffer zone between the crowd and ourselves.

Shockingly, Robert Mee, CEO of Lancaster Pride encouraged the situation. At one point he shouted at us, ‘fuck off you fucking dogs, you’re ruining it’ and can seen holding a corner of one of the counterprotester’s flags and smiling in the protest footage. He later went to tell the crowd of people watching main stage, ‘we made them go away, politely’. In fact we left when the situation had escalated to the point we felt unsafe to continue.

So if lesbians asserting their sexual boundaries aren’t welcome at Lancaster Pride, who is?

On our way to the town hall we passed a brightly coloured shelter which appeared to be a children’s play area with a ball pool and children’s toy box. We were surprised to see it occupied by a group of men in leather costumes and dog masks. One was positioned on all fours attached at the collar while another participant held them on a lead.

This tent belonged Dog House Stoke a group based around the sexual fetish of dressing up as ‘puppies’ with rubber outfits, ‘puppy’ masks, collars and chain leads, and engaging in sexualised puppy play.

We were shocked and disturbed to see young children playing unaccompanied with these men in their tent and made a complaint to the police about our safeguarding concerns. 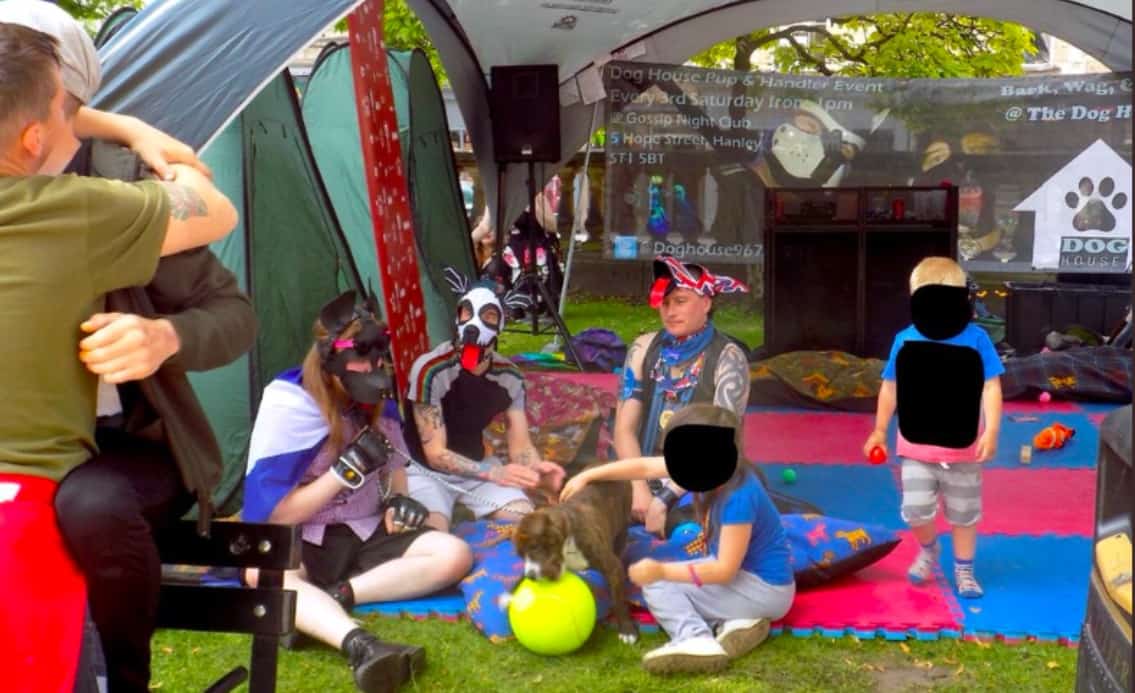 A more in depth write up about these Dog play fetishists activities at UK Prides can be found here.

Both the ambiguous presentation of the pups tent (is this an adults oriented activity or a children’s play area?) and the whipping up of a group of excitable teenagers into an angry mob were an enormous dereliction of concern for the well-being of children by the organisers of Lancaster Pride, and show a flagrant disregard for the idea of sexual boundaries.

Whilst Lancaster Pride promotional materials states, ‘all are welcome,’ we lesbians certainly did not receive a welcoming reception. Organisations and individuals that have presented our beliefs as hateful are contributing to the climate of hostility and aggression towards homosexual women which we experienced, and are acting irresponsibly in their duty of care towards children.

We remain unshakeable in our conviction that there is nothing wrong about women loving women, and that children should not be involved in adults’ sexual fetishes. We are proud of what we stand for, the shame belongs to Lancaster Pride.

More on why Resisters felt called to protest can be found on their website www.resistersunited.org