You are here: Home / Sport / Our input to World Athletics’ Global Conversation: reinstate the female category 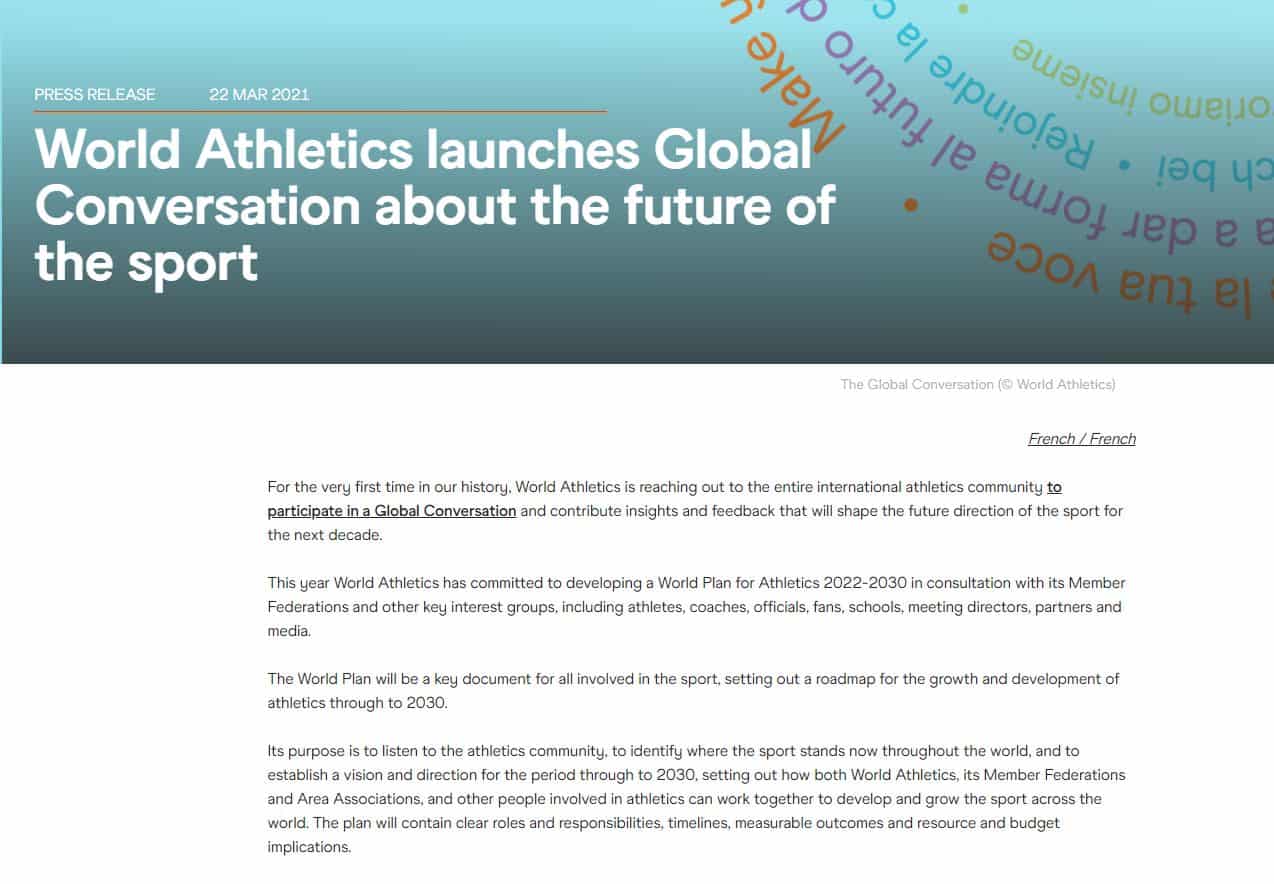 World Athletics launched their “global conversation” in March 2021, inviting suggestions for topics that matter for the future of their sport. Fair Play For Women’s director Dr Williams wrote to World Athletics with a simple suggestion: reinstate the one eligibility criterion that matters for fairness in the female category, being female. Dr Williams participated in a round table discussion of World Athletics’ trans inclusion policy at their headquarters in Lausanne in October 2019. At that meeting, hers was a lone voice advocating for females. Afterwards World Athletics, then known as IAAF, released this statement to which we responded. But not much has happened since. Everyone knows there’s a problem, but few are willing to speak up, let alone act, as World Rugby have done, after a rigorous process in 2020 in which we took part. We hope that others will find their voices and the courage to speak up for women now. The scientific evidence is now available to confirm what we all knew already, that sex not gender identity is what matters in sport. Male performance advantage makes it grossly unfair for any male to compete in the female category, no matter how they identify. Anyone who cares about fairness in athletics, or about the integrity and credibility of its governing body, should demand that this conversation be heard. Here’s what she wrote.

As you discuss the major issues facing athletics, we respectfully request that you consider how to protect women’s athletics, by reinstating the eligibility criterion that really matters: being female. This will restore fairness and ensure inclusion for women and girls.

It is clear that World Athletics values fairness. The ongoing debate around the latest shoe technology, including limits already imposed and planned inspections at the Olympic Games, show that you can move quickly to limit access when fairness is threatened. Your own director, Dr Stéphane Bermon, has determined that the latest permitted plates in shoes give advantages of 1-2%, prompting a further review.

Likewise, when Paralympic sprinter Oscar Pistorius wanted access to the Olympic event, much work was done first, before granting access, to ensure that his running blades did not give him an unfair advantage. The approach was: maintain eligibility barriers until it can be demonstrated that relaxing them is fair.

In both these cases, where elite men’s medals and records are in play, great caution has been, and continues to be, exercised to ensure fairness is maintained. Yet entry into women’s events for self-identifying women, born male, was readily granted, ahead of any reliable or robust evidence that their male performance advantage had been eliminated.

Now there is clear evidence, from multiple studies, published in peer-reviewed journals, that male advantage is not eliminated after three years of testosterone suppression. It’s not surprising, since male advantage comes through the many anatomical and physiological changes wrought by puberty. These may be triggered by testosterone, but reducing circulating testosterone in a mature adult male does not reverse puberty.

At around 10%, the difference between men and women in track events, whether comparing elite with elite or club-level with club-level, is at the lower end of the range of male performance advantage in sport. In pure power events like weight-lifting it can be 50%. Whatever the effect of testosterone suppression in adult males may be, it is now clear that it does not remove this advantage in total, and probably does not even reduce it by half.

If shoes bestowing a 1-2% advantage should be banned, then males with a 5-10% advantage should not be given access to the protected category for females. This is because sport is segregated by sex not gender identity. Male-bodied people who declare a female gender identity, whether or not they take steps to align their bodies with that female sense, retain much of their male performance advantage such that fair competition with women is not yet possible. Males don’t need a protected category in sport, but females do, to give them access to safe and fair competition.

Sport can be inclusive by ensuring an inclusive environment which is welcoming and non-judgemental; and by ensuring there are categories that provide access to safe and fair participation and competition for all. Therefore, we request that World Athletics revisits this issue in the light of the latest evidence, and restores fairness for women and girls by reinstating the appropriate eligibility rule for the female category.

We look forward to engaging further with you on this subject.