You are here: Home / Data / Mental Health Services told they must drop questions about sex and start recording “gender identity” instead. 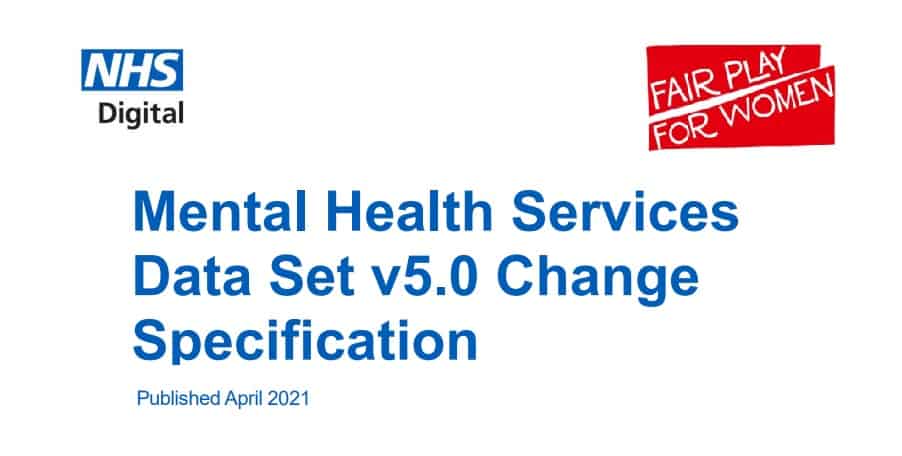 All NHS-funded mental health service providers are required to submit information to the Mental Health Services Data Set. MHSDS statistics offer a comprehensive national picture of the use of specialist mental health, learning disabilities or autism services in England. It’s used by policy makers and commissioners for service planning and to monitor government policies and legislation. Official statistics derived from the data set are published each month by NHS Digital.

NHS England has the power to direct NHS Digital to collect health-related information from service providers. A ‘direction‘ was made by NHS England in December 2020 to enable the data categories in the MHSDS to be updated according to a new ‘Information standard”. On 21st March 2021 the Data Coordination Board, acting under delegated authority from the Secretary of State for Health and Social Care, approved a change to the information standard for mental health for publication under section 250 of the Health and Social Care Act 2012. Following stakeholder consultation about what changes should be made, a new specification (version 5) was published in April 2021. Service providers delivering mental health services for the NHS will be legally and contractually required to submit data to the new version of the MHSDS in October 2021.

Previously, there has been just one category called ‘gender’ with two options, male and female. However, this will now be replaced by a code called “gender identity”. An additional category will also be added to capture information about whether “gender identity” is the “same at birth”. The change specification document explains that “this new data item has been added to clarify (and help derive) trans without labelling specifically”.

The Technical Output Specification shows the data entry choices for the Gender Identity category. These have been expanded beyond the sex binary, and emphasise the inclusion of trans identities. Gender identity options will now include 1) Male including trans man 2) Female including trans woman 3) Non-binary 4) Other. The “Gender Same At Birth” question will be Yes/No.

The MHSDS Change requirement list for version 5 provides more information on why the changes are being made, listing justifications and benefits.

Another of the stated benefits was to “allow monitoring and reporting against the NHS obligations under the Equalities Act”(sic). Sex is a protected characteristic under the Equality Act but gender identity is not. Collecting data on gender identity without a question on sex does not aid equality monitoring. How can the NHS comply with its legal obligations under Public Sector Equality Duty to show “due regard” to eliminate discrimination due to sex if it’s not even monitoring it properly?

Taken together, the cited reasons for making the change are not consistent with changes being made.

While people’s identities are important to their own lives, and collecting data on identity can often be useful, this must not be seen as a replacement for data on sex. In order to improve both demographic and health care data for individuals in the context of ‘diverse gender’ outcomes it is important to ask for information on both birth sex and gender identity. This is particularly important for official datasets relating to mental health and autism services where there is good evidence that gender diversity is over-represented. It is also known that there are significant differences in the incidence of various mental health conditions by sex and by age, so sex remains a critical variable to collect. Accurate data on sex will also be important when assessing the requirement for and problems occurring on single-sex mental health wards.

Harmonisation of standards for sex and gender identity

Sex at birth is a fundamental demographic variable and efforts should be made to improve its accurate collection and not diminish it. Instead we now are seeing public bodies dropping the recording of sex altogether and replacing it with an undefined variable called “gender identity”. What we are seeing within Mental Health Services is unlikely to be an isolated incident and is part of general trend away from collection of data on sex.

NHS England is currently carrying out an equality monitoring scoping project to assess the need for a unified information standard for the nine characteristics protected under the Equality Act (2010). These include sex, gender reassignment, and sexual orientation. Most concerning of all is that the ONS is a member of the Steering Group for the project. The aim is to ensure that the approach being developed takes account of developments across government. Freedom of Information Requests have been made to reveal more about what’s been happening behind the scenes.

The Government Statistical Service (GSS) is working on a way to harmonise measures of “sex and gender” in data collection across government. The project page called called “Sex and Gender harmonisation guidance” states that “We recognise that sex and gender are distinct concepts but as they are closely related, they are presented together on this page“. It then goes on to list some related strands of work on both concepts. One such area of work is the NHS England Unified Information Standards for Protected Characteristics (UISPC). There is also a GSS project page called the “Gender Identity Data Harmonised Standard”. This page confirms that “this standard is about gender identity. It does not collect information on sex”. Question placement is discussed “We anticipate that a gender identity question may be asked with a question on sex as some data collectors may want to collect data on the protected characteristic of sex, female or male, in addition to data on gender identity”. The Gender Identity Standard is based around asking whether the gender someone identifies with the same or different to their sex registered at birth. Despite there not yet being an agreed Data Harmonised Standard for sex, it is nonetheless clear that the GSS harmonisation team understands sex and gender identity to be two distinct concepts that will require separate and distinct Information Standards for data collection.

It is becoming increasingly clear that significant changes are being made to the way data on sex is collected in advance of any agreed sex data harmonisation standards. Stakeholder engagement may be happening, but a full range of views and perspectives are not being heard. Experts and advocacy groups who support the retention of sex as an important data category separate to and distinct from self-declared gender identity are either not invited to participate or do not feel safe to air their views.  As such a distorted consensus about how changes should be made is used to drive the changes forward. There is an urgent need for OSR to develop best practice in this area before the ability to collect good data on sex is lost.

We have now written to the Director General for the Office of Statistical Regulation (OSR) to request an investigation into the process that led to the MHSDS specification being changed.  You can read a copy of our letter here. We will update this page when we receive a response.

Collecting and reporting data about sex in official statistics

Small misclassification errors when collecting data on sex can have a large distorting effect.

If you value what we do and want us to continue please consider donating.