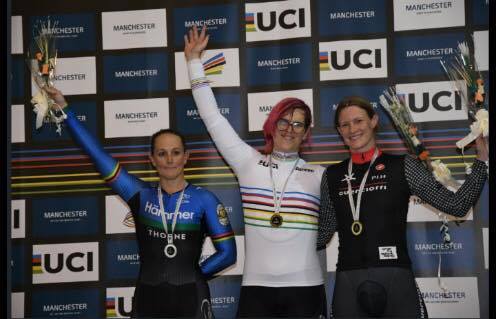 A guest post written by a man with a lifetime’s experience in the sporting world who wanted to share his reflections on the latest debacle surrounding trans inclusion in women’s sport.

The International Olympic Committee (IOC) and countless sport governing bodies around the world may struggle with establishing fair, reality-based guidelines and rules regarding transgender sporting participation, but the good people of Manchester didn’t seem in the least bit confused. The pink hair hadn’t fooled them. “What’s that big, lardy bloke in lycra doing in a women’s race?” “Who ate all the pies?” A little unkind perhaps and minus the swear words, yet these were the comments from the handful of blunt northerners at the recent UCI Masters Cycling World Championships in which transgender cyclist, Rachel McKinnon beat Dawn Orwick in the final of the female 35-39 age group sprint. Thankfully, Julie Cooke of Cheshire Police wasn’t in earshot. So vociferous and lively were the comments both on Twitter and the YouTube livestream, the event organisers decided to disable them. Nevertheless, and before it was subsequently lost in cyberspace, I enjoyed the one about Bury black pudding; but I’m a northerner too with a northerner’s sense of humour. And I’ve been to Bury market.

There were the obligatory television interviews beforehand of course. For Sky News, Martha Kelner bravely tried to negotiate Rachel McKinnon’s often illogical statements about people wanting to erase their very existence and how, since it said ‘female’ on McKinnon’s driving licence, this somehow meant the world’s first, non-surgical sex change had been performed; or perhaps being in possession of this licence caused cells to change from XY to XX simply by tucking it in the left pocket instead of the right. Who knows with Canada; a land of majestic wilderness full of countless and still-to-be-discovered pronouns. If unicorns exist, they surely live here.

Of course, It would have been helpful if Kelner had been able to point out that a legal fiction, something the majority would agree is a ‘good thing’ for an equitable society generally, does not change biological reality. By this point and having managed to get Rachel McKinnon to admit that having been born a man they might actually have an advantage over women – only might, mind you – Kelner probably felt her job was done and let McKinnon continue with something about the difference between first and last in a man’s race being more than the difference between the sexes – another giant McKinnon untruth as anyone who knows anything about sport will affirm. Rachel McKinnon’s grasp of science appears weak and their knowledge of sport generally even weaker. For a self-proclaimed ‘public intellectual’ their ability to argue logically also seems remarkably poor. it’s all about the slogan; you know the one. As ever, the BBC struggled to say anything insightful and sat on the transgender side of the fence, in the BBC article ‘Rachel McKinnon: Transgender athlete sets world best’. It was left to Piers Morgan to comment most critically: “Virtue-signalling activists can howl at me all they like but this is just wrong. Trans women born to male bodies have an unfair physical advantage over women born to female bodies. Women’s sport is going to be destroyed unless this is urgently addressed”

As many people observed, it’s a sad day when almost everyone agrees with Morgan. Twitter ratios on related news links from Sky, the BBC and even Cycling Weekly showed that the general public clearly agreed with Mancunian track cycling fans, with positive comments about McKinnon’s presence in the F35-39 category notable in their absence.

No platforming by refusing to appear with a scientist

Naturally, the BBC knows full well that Rachel McKinnon refuses to appear on any interview platform if they know there is a scientist on the same platform: it’s happened to them several times. I think everyone understands that this is because a scientist knowledgeable in this field would provide a little explanatory information for the audience, followed by quite specific questions. They might say, for example, “according to Professor Ross Tucker, a South African sports scientist who was part of Caster Semenya’s team in her recent case against the IAAF, “…the presence of the Y chromosome is the single greatest performance advantage a person can have. That doesn’t mean that all men out-perform all women, but it means that the Y chromosome and specifically the SRY gene on it, which directs the formation of testes and the production of testosterone, is a key criterion on which to separate people into categories.”

This would then allow the scientist or the BBC interviewer to ask McKinnon the following
two questions:

“Do you have the Y chromosome? And if you do, surely you have a massive athletic performance advantage as a consequence?”

The obvious follow-on questions for Rachel McKinnon would then be:

Have you experienced male puberty? If you have, surely it is unfair for you to compete against women?

Next, the scientist might say, “muscle physiologists have shown that with previous training, muscles develop an increased number of specialist cells called myonuclei. This is especially true in the presence of testosterone (or anabolic steroids) following male puberty. When training stops, these myonuclei become dormant, becoming active again when training recommences. You were a recreational athlete prior to transitioning, weren’t you? You have also said that you respond extremely well to strength training: ‘gifted at packing on muscle’
was your claim.”

Could your previous athletic training as a man prior to transitioning, along with retained male, cellular muscle memory, explain your enhanced strength training response and give you another unfair advantage?

Then, as McKinnon (probably) unclips their lapel mic and returns to that regularly practised line, “you’re just trying to deny my existence! Transphobe!” I’d like to see the BBC interviewer show some journalistic integrity and say, “That’s really not true, is it? People are simply saying that since you have the Y chromosome, have experienced male puberty, have thigh strength and benefit from cellular male muscle memory, for fairness you should compete in either a transgender category, or a male or open category, and not against females.

A dose of reality for the IOC

Finally, here’s a polite suggestion for the International Olympic Committee, IOC President Thomas Bach and all other sport governing bodies, including cycling’s international federation (the UCI) that approved and sanctioned McKinnon’s participation in this race: hold your next meeting regarding transgender sporting participation guidelines in Manchester; no… Bury market. Get out of your five-star hotels, park your cronyism and misogyny and stop drawing up completely unscientific guidelines on the back of a cigarette packet that ruin women’s sport. Stop messing about with arbitrary testosterone levels (that do not reduce strength in males) and consider the above questions and the science that underpins these questions. Look carefully at the latest studies on transitioning from Sweden, commission further such studies and develop these to look at the effects of concurrent transitioning and sports specific training. Have some black pudding. In the real world you might finally see what blunt northerners and everyone else does.

Facts behind this story

Rachel McKinnon received a gold medal in the Female cycling F35-39 sprint of the U.C.I. Masters Track Cycling World Championships in October 2019.  Female cyclist Dawn Orwick was placed second.  McKinnon accused Orwick of ‘poor sportsmanship’ because she didn’t link arms on the World Championship podium.  On the podium, Dawn Orwick who was cycling for the US, held her left arm behind her back.  McKinnon said: ‘Second place kept her distance and put her hand behind her back as her own sign. ‘Signifying something like poor sportsmanship.’

Racing in Manchester, at the Manchester Velodrome, Rachel McKinnon broke the masters women’s world record in the 200-meter time trial by 0.24 seconds with a time of 11.649 seconds, in the cycling race qualification for the Female 35-39 Sprint event.  McKinnon transitioned in 2012.

The Union Cycliste Internationale follows the International Olympic Committee transgender policy, which was updated in 2015 to make it possible for trans women to compete in female sports.  Dr Emma Hilton has demolished the science supporting the IOC decision to let male-born transgender athletes into female competition

In the next Olympics, transgender athletes will compete in the Olympic Games.

More on our sports campaign