You are here: Home / GRA consultation / How does the Gender Recognition Act impact on the sex-based rights of women? 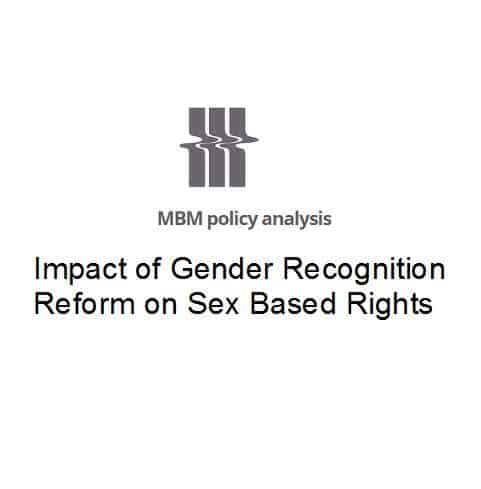 This briefing note was prepared for the policy analysis collective Murray Blackburn MacKenzie by Employment Solicitor Rebecca Bull and an expert submission to the Scottish Governments consultation on reform of the Gender Recognition Act.

The Scottish Government’s Equality Impact Analysis fails to understand the current law with regards to when a person has obtained female legal sex status using a Gender Recognition Certificate (“GRC”). It has not identified nor has it analysed the impact of Gender Recognition Reform on sex -based rights.

There are many sex-based rights, which are negatively affected and, in the case of equal pay, completely extinguished by suspending recognition of a person’s biological sex.

Currently there are sex discrimination exceptions in the Equality Act which allow single sex service providers to exclude both men and transwomen who do not have a GRC. Once a transwoman obtains a GRC a service provider may only rely upon a gender reassignment discrimination exception. This disallows a public body from undertaking the supporting public functions required to provide the service such as allocating budget to it.

There is cause for significant concern that single sex service provision on the lines of natal sex will be rendered unworkable and severely compromise the rights which women currently have to single sex services. Scotland is already experiencing a chilling effect on the use of the sex exceptions, which is, in my view putting local authorities at risk of breaching women’s human rights.

The full briefing document can be accessed here.