On 2 December 2020 the Liberal Democrats held an official complaints hearing after receiving multiple reports from members of the public about the unacceptable behaviour of one of their prospective parliamentary candidates (PPC) on social media.

The issue before the Adjudication Panel was whether a tweet posted by Dan Schmeising, their parliamentary candidate for Cardiff South and Penarth, during the run-up to the 2019 General Election brought the party into disrepute.

The tweet said “Save yourself the stress and just block them mate, TERFs aren’t worth the hassle”. 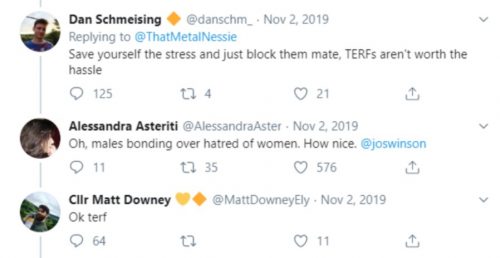 The Panel upheld the complaint and imposed a number of sanctions. Mr Schmeising was required to apologise, and to seek guidance and mentoring from a more experienced parliamentary candidate if he wished to remain on the approved list of PPCs.

The Panel also endorsed a recommendation that the Party should consider training for men in their 20s and 30s to educate them on the use of misogynistic language.

The facts and reasoning in the complaint:

We have obtained a copy of the Complaint Hearing Outcome sent to the complainants. The facts found by the Panel include that:

TERF is used to describe feminists or women in general who “do not accept that trans women should in all circumstances and for all purposes be treated as women. It is a term that can be used and understood as being insulting, degrading or even threatening”.

Mr Schmeising “used the term in a way that was insulting and dismissive, though not threatening. A reasonable reader could have felt insulted or degraded if they perceived the tweet as being directed at them”.

The tweet “was intended to suggest that the arguments of women who do not accept that trans women should in all circumstances and for all purposes be treated as women were not worthy of debate and should be dismissed out of hand”.

By posting the tweet the Respondent had “brought the party into disrepute and breached the provisions of Article 3.7 of the Federal Constitution of the Liberal Democrats”.

As part of their reasoning the Panel said:

We agree with [complainant x] that, regardless of the use of the term itself, the tweet was intended to dismiss and delegitimise the point of view of those with whom Mr Schmeising disagreed.

While we understand the argument used by Mr Schmeising that it is appropriate to not be drawn into debate with those, like racists, whose views are abhorrent to right-thinking people, we do not agree that discussion about the interaction of trans rights with the concerns of those who hold the same views as [complainant x] can be characterised in the same way.

Parliamentary candidates ought to anticipate a significantly higher level of attention and scrutiny from members of the public, the press and political opponents than other party members, particularly during an election campaign. (It is acknowledged that on November 2, parliament had not been dissolved, but the election campaign had de facto begun.)

As a parliamentary candidate, Mr Schmeising would inevitably be seen as a representative of the party, not merely as a member. Posting a tweet that can reasonably be read as insulting those holding a particular opinion and delegitimising their right to be heard would be read as being the view of the party.

Sanctions were considered necessary because the decision to post the tweet was “the result of political naïveté and a genuine concern with the rights of trans women” but that he “failed to exercise a measure of self-control and expressed himself in terms and in a manner that we hope he will, on reflection, recognise as being regrettable and inappropriate.

The Panel set out the form that such an apology should take:

Following a disciplinary panel meeting held on 2 December 2020, I have been asked to apologise to you for the tweet posted by me on November 2 2019. I have agreed to apologise because, on reflection, I accept that I should not have used the term “TERF”, and I should not have used language capable of suggesting that views held by women who do not accept that trans women should in all circumstances and for all purposes be treated as women should not be heard.

I believe passionately in the rights of trans women to be treated as women, and that those rights should be upheld notwithstanding the concerns mentioned above. But I also believe passionately in liberalism and the need to debate and understand opposing positions. In posting in the way I did, I made a serious misjudgement, and I apologise for that misjudgement and the offence it caused.

Two weeks on (16th December) we understand that the complainants are yet to receive such an apology.

It was also sanctioned, that should he wish to continue as an approved parliamentary candidate for the Lib Dems, he should seek guidance and mentoring from an experienced candidate. The Panel said this would “enable him to improve his political judgment and willingness to engage appropriately with those with whom he disagrees”.

Women must be free to stand up for their rights

Accusations of transphobia are designed to shame and silence women. Women get called transphobic for simply asking questions. Women are afraid to speak out, and fear for their jobs and reputation if they do.

Last year Fair Play For Women found twenty one parliamentary candidates standing in the 2019 General Election who have labelled women as ‘terfs’ or ‘transphobes’ simply for not accepting that transwomen should be treated as women in all circumstances and for all purposes. This is despite the fact that current UK law agrees with us. Nine were representing the Liberal Democrat party, two of whom dismissed women as ‘terfs’ during the run up to the General Election.

Mr Schmeising is another example of a parliamentary candidate who thought it was acceptable to dismiss women’s opposing views in this way. Only on this occasion he was reported to the Party by members of the public for his behaviour and found in breach of Party standards.

It is not acceptable to insult and dismiss women who hold the view that sex-based rights matter …. and it appears that the Liberal Democrat Party agrees.

This is not the first time a Lib Dem representative has been found to be in breach of Party standards for failing to treat members of the public with respect. Lib Dem Councillor Matt Downey has recently been forced to apologise for calling Fair Play For Women a ‘transphobic hate group’ and women ‘terfs’ on twitter, behaviour that was found to be in breach of the party’s constitution.