You are here: Home / Guest posts / Lesbians are an endangered species. I want my community back!

I’ve been thinking a lot over the last few days in particular about transactivism and lesbians and thought I might try to put some of it into writing, partly to try to make sense of it and partly because I still keep seeing people refer to the ‘LGBT’ or ‘LGBTQ’ community and equating transactivism with lesbian and gay rights.

I think the most obvious impact of transactivism is on young lesbians being encouraged to identify as heterosexual transmen and to subject themselves to damaging medical treatment, the effects of which they will have to deal with for the rest of their lives. I think Janice Turner’s article in the Times already covers that issue very well.

One of the problems for young lesbians (in addition to the rise in lesbophobia particularly among the young) is that, when they reach out to ‘their’ community, eg join an LGBT group for support, what they get isn’t their community at all but something very hostile.

Gender critical feminists will be familiar with the idea of trans-identified males co-opting women’s identities, women’s rights, women’s spaces etc for their own ends but there are other forms of appropriation going on, particularly in the (former) LGBT ‘community’ (including transsexuals themselves having been co-opted by people who don’t have body dysphoria and who marginalise them as ‘truscum’) . For lesbians, in addition to the appropriation of womanhood, I think the two main additional identity appropriations that cause problems are:

These are heterosexual biological males who identify as women and, therefore, as ‘lesbians’ and have hijacked our community (support groups, social groups, bars, forums, you name it) and believe that lesbians should be open to having sex with someone with a penis if they ‘identify’ as a woman (see ‘the cotton ceiling’). This group has widened further e.g. including ‘transfeminine men’ and men who identify as a woman part-time (so get to walk through life as a heterosexual man but just ‘identify’ as a lesbian for a few hours to access a lesbian group or lesbian club night where they are of course the most oppressed person ever and must be centred at all times).

As well as being included in our groups, they are held up as examples to us. For example for International Women’s Day one group had a talk from an ‘inspirational woman’ who was a biological male, who hadn’t had any surgery, was dressed as a bloke (not that that should make any difference.), had a bit of stubble going on and identified as non-binary (pronouns something like ‘zie’) not as a woman. Like, not only could they not find an actual woman who was inspirational enough to fill that spot, they couldn’t even find a man who was prepared to say they were a woman. Stuff like this is being funded by charity grants intended for women and for lesbian and gay people.

Don’t quite believe it? Here’s just a random selection of biological males who identity as women found on the lesbian section of some well known on-line dating sites…..

This is pretty much a consequence of the above. For those who don’t know, queer is now used as an all-encompassing term for anyone who doesn’t identify as a heterosexual “cis” person. However, it is also preferred by certain people over terms like lesbian, gay and bisexual because it does away with what are considered the rigid boundaries of ‘gender’ and sexuality e.g. homosexual, lesbian and gay meaning being attracted to the same sex, bisexual as being attracted to ‘both’ sexes. This allows people to reject these categories and the idea that there are two sexes.

Along with the transbians, these ‘queer’ women become involved in what was formerly the lesbian and bisexual women’s community. However, these trans uber-allies have a lot of views that are contrary to the interests of lesbians in particular. They believe that lesbians have ‘cis’ privilege and also that lesbians (along with gay men) are the most privileged people in the LGBT community. They believe that lesbians are narrow-minded and transphobic for only wanting to date other biological women and oppress transwomen who can’t break through the ‘cotton ceiling’ of their underwear.

I’m not even sure when this stuff started because, like most of us, due to the blurring of the meaning of words, I just didn’t see it happening. A lot of the main online websites, blogs and forums for lesbians started to change, with different women running them and, over time, a shift in the tone – lots about trans inclusion and more references to being ‘queer’ and open to relationships with anyone, about how some people (the lesbians) had privilege in our community and should prioritise these other people, less representation of butch women (despite the talk of blurring of gender boundaries/genderfluidity) etc.

It was only years later, when someone who knew the women who had been running one of these websites was talking about who they were and who they were in relationships with (bio females in relationships with bio males, basically) that the penny finally dropped with me.These were straight women appropriating our identity and lecturing at us and marginalising us in our own community.

This blurring of the language enables them to do it – but even in cases where you can see it for yourself (e.g. if you are looking at what is clearly a straight couple, who you know will be read by everyone they meet as a straight couple, even if the guy is wearing a bit of eyeliner) you couldn’t say anything because now it would be transphobic to say that he wasn’t a woman (or genderqueer or whatever).

Why aren’t lesbians speaking out more?

Firstly, I think it takes a while to see what is going on. This is for a number of reasons including the deliberate blurring of language, the shutting down of any discussion or even thought on the issue through the repetition of mantras such as transwomen are women, and the misrepresentation of this issue in what we consider to be ‘our’ trusted (LGB) news outlets, organisations, websites etc. We also might be relying on our positive experience of and friendships with traditional transsexuals without understanding how much the trans movement has now changed (traditional transsexuals are often demonised in this new world order too and called truscum). There is also the tendency to conflate trans with gay issues when they are not the same at all. From my own experiences of coming out and being oppressed on the basis of being different, I know it’s so easy to automatically feel solidarity towards and feel angry about any oppressed group, especially if you are being told that other views are ‘anti-LGBT’ and coming from ‘anti-LGBT’ organisations.

Some lesbians aren’t really that involved any more so aren’t aware of what is going on. Many lesbians will have accessed the LGB community, lesbian support groups, lesbian/gay bars when they first came out, when they were looking for a relationship, in times of difficulties etc but are now happily settled in a relationship and don’t feel the need to access those resources. They will still have their lesbian ‘community’ but that will mean texting their friends Sarah & Jo and Claire & Debs and arranging to meet up at their (straight) local pub for the evening. Any involvement with the wider LGBT community will be more minimal like maybe watching the Pride Parade once a year or occasionally reading something on an LGBT website about some awful transphobes who are attacking the LGBT community. They will think back to the transsexual people they knew 10 – 15 years ago who were nice people who just wanted to get on with their lives.

Young lesbians have nowhere to go

3) Young lesbians these days are more likely to be identifying as transmen rather than as lesbians. For the few who do, they lack access to a real lesbian community which could introduce them to an alternative to the current discourse. They have little opportunity to discuss shared issues, learn from others’ experiences and have other lesbian women on their side. Young lesbians who aren’t accepted or feel isolated in their school, family, community etc will seek out an LGBT youth group and this community they reach out to will heavily endorse the transactivist agenda as part and parcel (and absolutely central) to their identity. Where else do they go and how do they know that there is anything else?

Nobody listens to lesbians anyway!

4) The low status of lesbian women within the LGBT community also stops some speaking out. I don’t think people outside are really aware of how much misogyny and in particular hatred of lesbians there is from some gay men.

There’s a big personal cost to speaking up

There are big risks to speaking out for women. These risks are increased if you are a lesbian as it is coming from your ‘own’ community and being a lesbian puts you under suspicion of being trans-exclusionary (ie penis-exclusionary) anyway. If you run a lesbian business or events, you can’t risk being anything other than pro the trans agenda or they will destroy your livelihood. And I’m sure most of us have seen the threats and actual violence meted out to those who dare to disagree. There’s also a fear about just broaching the subject with another actual female lesbian because you don’t know how many of you are onside so it’s a risk. From tentatively raising the issue with a select few, I do know lesbian friends who have got concerns about this but we are very cautious and tentative about saying anything to other women because of the risk. The bigger stories like the closure of MichFest and the men wielding baseball bats to keep the lesbians in check on Women’s Marches and Pride Parades are just symbols of the way we are being policed. This is now what happens to what is left of lesbian events, lesbian-run businesses etc, if we don’t keep in line. 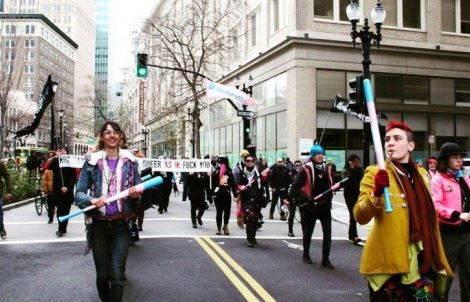 Our lesbian voice has been diluted from within

Finally, simply, as I’ve explained above, another reason some of ‘us’ don’t oppose or seem to actively support transactivism is that not all of ‘us’ are actually ‘us’. As lesbians step away from the LGBT ‘community’ and more ‘lesbian and queer women’ emerge from the two groups referred to above, an increasing proportion of ‘us’ are actually a subset of heterosexual men and women who loathe lesbians and support the transactivist agenda – but, because of the way language is being twisted, you’d never know that.