You are here: Home / Scottish GRA reforms / What have transgender rights got to do with women? 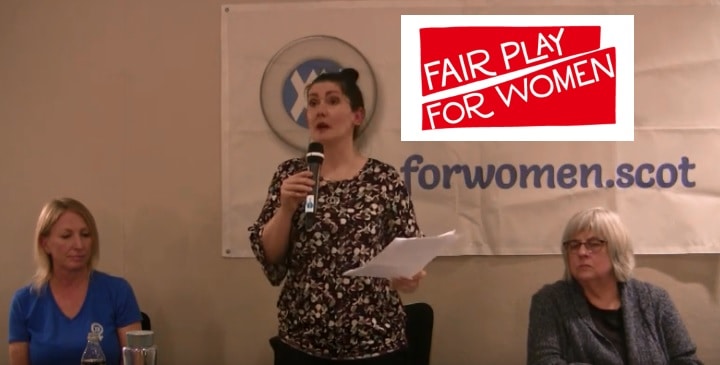 This is the video and transcript of a speech given by Dr Nicola Williams from Fair Play For Women at a public meeting hosted in Edinburgh in January 2020 by the campaign group ForWomenScotland. Here Dr Williams explains in simple terms how GRA reform will impact women’s sex-based rights.

You can watch the speech by clicking below (10 minute video)

Or read the transcript here:

What have trans rights got to do with women?

Why is it important that everyone here participates in the Scottish Governments consultation on GRA reform?

It’s because the GRA isn’t about who can be transgender. It is the law that determines who is male or female.

It determines who gets access to female rights. The sex-based rights generations of women have fought for.

So of course women must have a voice in this discussion.

We have to balance the right of a male person to be legally recognised as female based on his gender identity.

We also have to balance the right of a female person to be able to describe herself and her reality based on her sex.

There an obvious conflict.

And will only be resolved when everyone is heard.

An uneasy compromise position was found many years ago in 2004 when it was decided some transsexual males should be allowed to legally transition and change their birth certificate to female.

The compromise was that it would be a highly regulated system with robust medical gate-keeping.

The purpose was to help a few thousand severely dysphoric post-operative transsexuals. Numbers considered so small that the European Court of Human Rights said that “society could reasonably be expected to tolerate it”. By that they meant women.

This proposition has now changed dramatically we are no longer talking about a well regulated system to benefit a few severely dysphoria transsexuals. We’re now talking about a completely unregulated process with no objective eligibility requirements whatsoever.

This new system is to be based on self-ID. This opens it up to any male, for whatever reason, to say he was born female – no doctors, no surgery, no changes to his appearance – simply fill in and sign a form.

That is a radical change to the status quo and no longer something women can or should be expected to just ‘tolerate’.

Because when you open up the sex category of female to any male – the word female becomes meaningless and so do female rights.

Some people will tell you that GRA reform won’t impact women at all. It’s just admin to make a trans persons life that bit easier.

Access to female-only spaces and services is regulated by the Equality Act – not the GRA.

The Equality Act already allows us to lawfully exclude trans people from female-only spaces when necessary.

No changes are being made to the Equality Act so the law on female-only spaces will continue as normal.

They are in fact right – but the devil is in the detail here.

It’s true that its the Equality Act that allows us to have female-only spaces – not the GRA.

It can be lawful to exclude all males from a female-only space for reasons of privacy, safety and fairness.

When I say ALL males that includes males who identify as women.

It also includes a male who has legally transitioned to female and now has a Gender Recognition Certificate and a female birth certificate.

This is because the Equality Act allows us to treat these two types of females differently.

The GRA allows a male to become female in the eyes of the law – not just to be female but to have actually been BORN female. And this ‘legal fiction’ becomes totally confidential. In fact it becomes a criminal offence for an official to reveal a trans person true birth sex.

So, this male will actually become a female ‘by virue of birth’. Just like you and I.

So although the Equality Act exemptions exist on paper – allowing a female-only space to be reserved for people born female – in reality they become unworkable.

Because any male can decide to have been ‘born female’ too.

This is particularly problematic because the female-only spaces set out in the Equality Act are already hanging by a thread.

Our access to female only spaces needs strengthening. Now is not the time to weaken them even further.

They are rarely used either because organisations don’t know they exist or have been told they don’t exist by trans pressure groups like Stonewall.

Or organisations know they exist but are scared of the reputational damage if they dare to implement them.

GRA reform will be the final nail in the coffin for female only spaces.

The Equality Act exemptions will be impossible to use and so won’t be used. It’s as simple as that.

What’s the point in laws for women on paper if they are never used? They might as well not exist. Its the same as taking these rights away from us.

The danger of GRA reform is also about language capture and a woman’s ability to discuss and uphold her sex-based rights.

Like it or not, the word woman is already ambiguous.

‘Transwomen are women’ is already the accepted mantra of most of our mainstream women’s organisations.

This means our sex is no longer a characteristic shared by all the women they advocate for.

So the original focus on the sex-based rights of women is lost.

Even worse this focus can be seen as exclusionary and is actively discouraged.

We have all but lost the word woman.

But we can still speak the truth that ‘transwomen are male’.

We can’t be sanctioned for saying it. We can appeal and win twitter bans.

We can challenge the media when they get someones sex wrong and pursue complaints about breaching accuracy in news reporting.

I’m often put under pressure as a stakeholder representative in transgender policy meetings to not refer to the sex of trans people – I can still respectfully refuse because in law transwomen are male.

All that would change overnight after GRA reform.

Transwomen would literally be female.

Transwomen no longer want to be just transwomen.

They are now asking to actually BE female, and for their trans history to be a secret.

They want to be identical to the “cis women”. Indistinguishable from us.

But that robs us of our own unique sex-based language that we need to describe ourselves and our rights.

We are not the same. We need our own rights unique to us and our needs.

How will campaigners, policy makers or journalists be able to do their job when we are all obliged to name someone born male, with a male body and male genitals, as being the female sex?

How can we protect single-sex spaces and services when we can no longer know or say who was born male or female?

How can a female-only space ever be guaranteed to be male-free when we can no longer acknowledge that transwomen are actually the male sex.

How will YOU be able to express your legitimate concerns if you can no longer say things like:

“I don’t want a transwoman to perform a cervical smear on me because that person is male”.

“I don’t want my elderly mother to be washed and dressed by a transwoman at the care home because that person is male”.

“I don’t think its fair or safe for my daughter to play rugby against a team that fields a transwoman because that person is male”.

We are no longer being asked to treat a man ‘as if he is woman’.

We are no longer even being asked to consider a transwoman to be a ‘type’ of woman.

It is now being demanded that all transwoman are literally female too.

If we can’t talk freely about the material reality of sex we can not discuss, monitor or uphold our sex-based rights.

This is why GRA reform is bad law and why it is right why demedicalisation of the GRA must be opposed.

It is right and fair that a robust and medical gatekeeping process is in place.

Unregulated access to birth certificates is a step too far.

This demand encroaches too far into OUR sex-based rights.

Our rights are not the governments to give away.

We can say NO.

We must ALL say NO.