You are here: Home / GRA consultation / Fair Play For Women give oral evidence on GRA reform to Women and Equalities Select Committee (WESC) 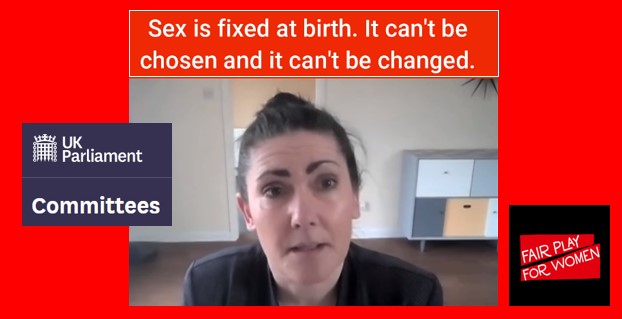 Fair Play For Women was invited to give oral evidence to the Women and Equalities Select Committee (WESC) on 21 April 2021, as part of its inquiry into reform of the Gender Recognition Act (GRA reform). We have now also followed up some of the questions asked with written answers.

This analysis highlights the problem with the narrow focus of the consultation undertaken for GRA reform. The only reforms under consideration have been to simplify the application process in part by removing some eligibility criteria. No consideration has been given to any reform necessary to address the consequences of the Act, both foreseen and unforeseen. This was a missed opportunity and a result of not including all stakeholder groups from the start. Changes to the legal implications of having a GRC (in terms of privacy protections and scope of exceptions) may have enabled a modified GRC to be extended to everyone under the trans umbrella without detriment to others. This was not considered. The existing problems, described below, were not even acknowledged. As such the only fair balance that could be struck in light of increased ‘detriment’ and the weaken argument for ‘why’ a GRC is needed today was to reject calls to expand eligibility to additional groups.

“What evidence is there that trans people, particularly transgender women, present a threat to women and girls?” [Elliot Colborn MP]

“…..or that reform of the GRA could lead to trans people presenting a threat to women and girls” [Elliot Colborn MP].

“We have heard from women’s refuges and other women’s support services that they have been able to enact the Equality Act where they felt that an individual had presented harm or a danger to women and staff in that setting. So we have heard examples of where it is possible for organisations to enforce those rights.” [Angela Crawley MP].

“You argue that the government decision not to change the eligibility criteria for a GRC… is fair and balances the needs of all stakeholders. Given that many trans people support a system of self-recognition why do you feel this is fair in any way to all stakeholders?” [Angela Crawley MP]

Looking back at the Fair Play For Women GRA campaign 2018

In brief: Why is GRA reform bad for women and girls?

[1] MOJ Offender Management Statistics obtained for 31st March 2019 show that 99% of the 13359 sex offenders in prison in England and Wales were male (13234 prisoners). Only 1% of sex offenders were female (125 prisoners). https://www.gov.uk/government/statistics/offender-management-statistics-quarterly-april-to-june-2019

[2] Under a Freedom of Information request (#20061502) made by Fair Play For Women on 15th June 2020 it was revealed that 76 of these 129 male-born transgender prisoners had at least one conviction for sexual offending. The convictions included 36 convictions for rape, 10 for attempted rape and 21 sexual assaults. https://fairplayforwomen.com/foi-200615022-data-final/

[4] https://www.irishtimes.com/news/crime-and-law/courts/circuit-court/transgender-woman-to-be-sentenced-for-assaulting-three-men-1.4489730 “The court heard Kavanagh of Priory Hall Whitehall Road, Kimmage Manor, Dublin has transitioned to a woman since the assaults took place and is now known as Shauna Kavanagh. A gender recognition certificate was handed up in court.”

[6] https://www.lawsociety.ie/gazette/top-stories/male-bodied-transgender-inmate-housed-with-women-prisoners/ “When before the court last July, the prisoner was in possession of a gender recognition certificate.”