You are here: Home / Sport / Defending Women’s Sport: our session at FiLiA 2022 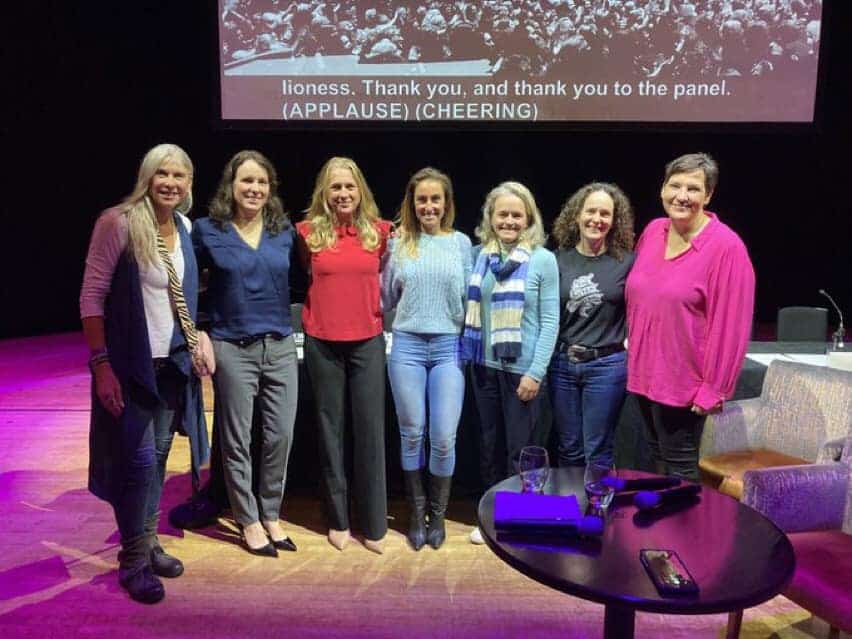 Fair Play For Women hosted a session at FiLiA 2022 on defending women’s sport, centred on sportswomen speaking for themselves. They talked about the challenges, their achievements, and the current fight to save women’s sport.

Elite athletes know what it takes

Two Olympians, swimmer Sharron Davies MBE and marathon runner Mara Yamauchi, talked to former Welsh rugby international and current Member of Parliament Tonia Antoniazzi. Mara pointed out how precarious the pathway to international sporting achievement can be. Mara came sixth in the Beijing Olympic marathon, but more than once in the years of working towards selection she almost missed out on a place in the GB team due to injury, illness, or just not being fast enough. Just one male in a women’s event will displace every woman or girl who finishes behind them, and that could make the difference. Mara also observed how extraordinary it is that eligibility for the female category is now defined in terms of levels of testosterone in adult males. There’s no mention nor recognition of all the features of having a female body which female athletes must manage and cope with while competing and training at a high level – menstruation, childbirth, breastfeeding and so on. These are female reality, and they can and do affect performance. Males, she said, never have to spend any time, money or energy on any of this.

Sharron, who came on to a standing ovation, was inspiring in her robust defence of women and girls and our right to fairness. Her passion comes from her own experience of being cheated out of Olympic gold at the age of 17. Everyone knew the East German women were being doped with testosterone but no one would speak out. Almost no one: her father did, and his reward was to be left out of the coaching team that went to the Games.

Masters athletes working with the next generation

Next, two elite masters sportswomen shared their experiences of sexism and progress, as competitors and as professionals working in sport. Dr Kerry McGawley is a lecturer and researcher in sports science at Mid Sweden University and international masters triathlete. Victoria Hood is a former international masters cyclist who runs a women’s professional cycling team, Team Jadan-Vive le Velo. Victoria first spoke out three years ago when Fair Play For Women and Woman’s Place UK held an event on women’s sport in London. After that, she spoke at the World Masters Cycling Championships in Manchester. Trans-identifying male Rachel McKinnon was racing and giving interviews. Sky News wanted an interview with Victoria, to hear the other side of the issue. British Cycling asked her to do it in a side room, out of sight. She refused, and did it in the arena where everyone could see her resistance. Kerry was a footballer in her youth, and played in the top women’s league in the UK. While men in lower leagues were being paid, she and her team mates had to pay their own way, but she was so inured to the imbalance that she never saw it as sexism. This is how it happens: sexism in sport is normalised. Women and girls settle for a lot less than men. But what we have, we won’t share with men who want to come and take it from us! Kerry teaches physiology on a graduate sports science course. Her students often start out thinking women’s sport should include anyone who says they are a woman, but after a physiology lecture they change their minds.

The swimming event in the USA that peaked the world

Then we heard from two women who were at the heart of the Lia Thomas swimming debacle in the USA earlier this year. Riley Gaines competed against Thomas in the national student championships, the NCAAs. Kim Jones was “Swim Mom”, who spoke out on the issue on behalf of her daughter and all the other young women who’d been forbidden to complain. Kim went on to found a campaign group, Icons, to fight for female sport in the USA. Fiona recorded an interview with Riley – there’s a ten-minute version which was shown at FiLiA and the full 25 minute version is here.

Why does sport matter?

We know sport is important for health and wellbeing. We know there are careers in sport which women should not be denied. But it’s more that that. Sport matters because if we cannot have fairness there, where the rules are supposed to make it fair, then what chance have we in any other part of our lives? We can’t settle for planned unfairness! It also matters because – as we heard from Riley – around sport, women’s boundaries are being violated and disregarded, while women and girls are being taught to accept it. Finally, it matters because sport, and sporting role models, can be life changing.

A social worker told us about her client, a young girl who was saying she was trans. After the European football championships, and the success of the England women, this girl was so impressed with the Lionesses that she asked for help to find a girls’ football team. Then the penny dropped. She said to her social worker, “I don’t have to dress up in ‘girly’ clothes and do ‘girly’ stuff to be a girl.” The social worker said, “No, just be you.” As they talked, the social worker told the girl that she used to be called a tomboy for liking football. “Nah”, the youngster replied, “you was just a girl that liked football”. This girl, who thought she might be trans, is no longer saying that. She’s not questioning whether she is a girl. She knows she is. And she wants to be a lioness.