You are here: Home / Language / Dear Politicians. Before you get asked to say “transwomen are women” make sure you know what you are signing up to. 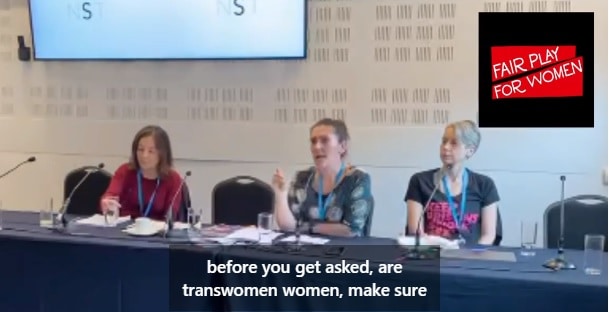 Fair Play For Women was invited to speak with politicians at the 2021 Conservative party conference about how transgender ideology impacts women and girls. Click HERE to watch our speech or read the transcript below.

Transwomen are women! Transmen are men!

You’ll have heard that phrase a lot.

Maybe you’ve said it yourself.

If not I can guarantee that one day soon you’ll be asked if you agree with it.

Surely only transphobes and bigots would disagree.

But when you say those words you are aligning yourself with a set of beliefs that most voters would find baffling.

And, it has consequences.

Say Transmen are men, and you could find yourself telling Andrew Marr that “it’s not right to say” only women have a cervix. And that “it should not be said”.

Or like Lisa Nandy, asked whether a rapist should serve out their sentence in a women’s prison because they now identify as a woman. She said “I think TWAW, and they should be accommodated in a prison of their choosing”.

Or like Ed Davey, asked whether there should ever be spaces for women where biological males should not go. He said No.

At first, I’m sure the phrase “transwomen are women” was motivated by a kindness to make a few people with gender dysphoria feel better.

It is now a political demand that trans women must be considered literally female, indistinguishable from females and their birth sex kept a secret, that their male bodies are in fact female bodies. That their penis is a female sex organ.

That demand impacts us all.

Because when words like ‘woman’ and ‘female’ get expanded to include the male sex it has real life consequences:

Newspapers run headlines like “woman found with indecent images of children”. “Woman exposes herself in public park”. “Woman accused of rape”. Readers are misled into thinking increasing numbers sex offenders are female – rather than understanding that female sex offenders are vanishingly rare. Sex offending is a crime committed by males. We need to be clear about that, more so now than ever.

When a female rape victim asks for a woman to examine her she can’t be sure that a male won’t turn up. If she objects she is called a bigot and told to “reframe her trauma”.

Women’s prisons can, and do, contain male rapists complete with a penis. Newspapers talk about ‘her erect penis’ when describing sexual assault and victims aren’t allowed to refer to their assault as ‘male violence’.

In sport, women and girls are being beaten, and sometimes even injured, by bigger, faster and stronger males in their own sports; women’s sports.

Women are being told to take precautions around lone male police officers while at the same time women are losing access to spaces where males can’t follow.

Lately the home secretary is calling for the police to take crimes like indecent exposure more seriously – while at the same time any man can be naked in the women’s changing rooms at my local gym, because he might be trans. And I can’t be sure I won’t be arrested for a hate crime if I question it.

Perhaps that naked male might feel like a woman inside or he might not – Layla Moran tells us not to worry – she “looks at people’s souls” and just sees a person – but what everyone else sees is a man with his penis out in the women’s changing rooms.

Trans activism is breaking down the social norms, the social contract between males and females, where we respect each other’s differences and make room for each other’s needs.

When the word ‘woman’ gets expanded to include others, it means women and girls get left with no words to describe ourselves and our own unique needs.

We get called ‘cervix havers’, ‘menstruators’, ‘birthing bodies’ and as the Lancet most recently described us on its front cover as “people with vaginas’. This is not only dehumanizing. It is also politically dis-empowering.

There’s already a word that unites all of these disparate groups. It’s female. Without that word, our needs appear niche or obscure rather than the needs shared by 51% of the electorate.

Over the weekend the British Pregnancy Advice Service expressed this problem very well when they bucked the trend and said “We will continue to use the word woman over people so we can continue to campaign effectively for reproductive rights. If we cannot articulate that it is predominantly women who are affected, rather than people at large, we will find it harder to dismantle a framework that is underpinned by sexism”. This of course ultimately benefits all female people who need their services, including those trans people who do not identify as women.

So before you get asked to say “transwomen are women” make sure you know what you are signing up to.

There is a conflict of rights here. Both sides matter and deserve to be heard.

Don’t turn your back on women and girls.

Advice to policy makers: You don’t have to decide if ‘transwomen are women’ or not