You are here: Home / Uncategorised / Crowdfunders show that women are still afraid to speak up in defence of our rights 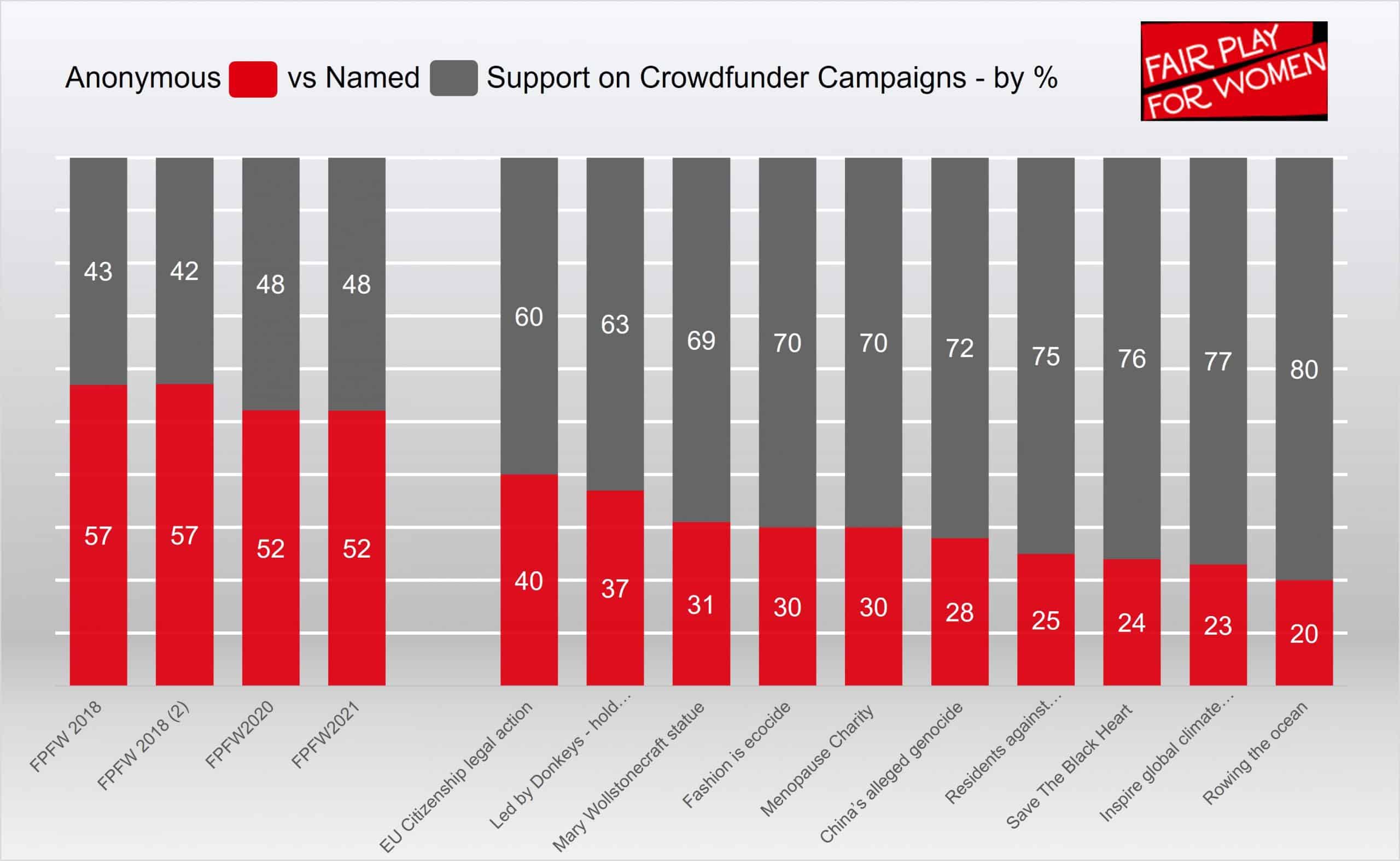 Crowdfunders have become a valuable tool in the fight to defend the legal rights of women and girls. In March 2021, Fair Play For Women raised £101,000 in 14 days to fund the challenge to stop the ONS redefining sex in the census. This was our fourth and largest crowdfunder, with over 3000 supporters.

More than half of all donations were made anonymously. While this has come down slightly since the two campaigns we ran in 2018, it is still the highest level of anonymity among current campaigns on Crowdfunder.co.uk.

It’s not unusual for large donors to give anonymously to avoid attention. Anonymity for small donors is less common. It suggests they do not want to be associated with the cause. It’s understandable that you might not want to be named if you fear possible consequences. Yet analysis of those in the campaign section of Crowdfunder.co.uk running at the same time show that not a single one had more than a third seeking anonymity, compared with over half for women’s rights issues.

Even on overtly political issues – taking on the UK government, a foreign government, or your own local authority – anonymous supporters never top 40%.

At the other end of the spectrum, some causes like the NHS charities have just a few anonymous donations per hundred.

Analysis of the Fair Play For Women datasets shows that among the named donors, 94% were female in both 2018 campaigns. More men gave in 2020 and 2021, with the named female share falling to 87%. We can’t tell what proportion of anonymous donors were female but can reasonably assume it is similarly skewed towards women.

The picture is clear: women are supporting these campaigns to defend our rights, but are afraid to put their names to them in public.

APPENDIX: % of supporters on crowdfinder.co.uk who are anonymous

The campaigns analysed and shown in the graphic are listed below. Analysis of FPFW is based on full data set; those from others are based on sample of 150-200 supporters.

Don’t let them get away with it – hold the government to account on their coronavirus management, a campaign from political activist group Led By Donkeys 37%

Both these had over 5000 supporters.

Rowing the Ocean to inspire and protect – 20%