You are here: Home / Prisons / Sex Self-ID in Scotland will have consequences for women in England and Wales too. 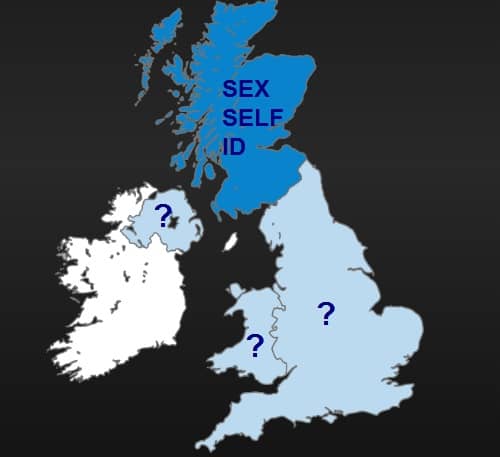 The new bill would reduce the age of eligibility from 18 to 16.

Removes any need for medical treatment or a diagnosis of gender dysphoria.

Instead someone would be able to sign a statutory declaration to say they want to change sex.

This means Scotland could soon be running a self-declaration system while the rest of the UK runs a medical gate-keeping model. This will have significant cross-border implications.

The Scottish route will be open to:

a) Anyone who was born in Scotland.

b) Anyone who is ‘ordinarily resident’ in Scotland.

What does this mean for the rest of the UK?

There are about 3/4 million people who were born in Scotland but live elsewhere within the UK.  These people will be entitled to use the Scottish application route while living in England or Wales to swap the sex on their birth certificate if they wished, for whatever reason. These may be genuine applications by people who identify as trans or fraudulent applications by others. Either way we can expect to see a significant rise in the number of males living in England and Wales with a female birth certificate, due to a law change in Scotland.

1.5% of the population living in England and Wales were born in Scotland. It’s therefore reasonable to presume that 1.5% of the 80,000 male prisoners in English and Welsh prisons will also be Scottish born. This means over one thousand male prisoners could be eligible for female sex status using the Scottish application route, with around 200 of these male prisoners having convictions for sexual offences.

Ministry of Justice (MOJ) transgender policy is that if a male-born prisoner has applied for a Gender Recognition Certificate they will be housed in a women’s prison in accordance with Prison Rules 12(1) and the GRA2004.

GRA2004 Section 9 “When a full GRC is issued to a person, the person’s gender becomes, for all purposes, their acquired gender”

The MOJ has interpreted this to mean:

The threshold for these ‘exceptional circumstances’ is so high that no woman or transwoman is currently considered so dangerous they can only be safely housed in a high security male prison. Instead, the MOJ has decided to locate any ‘high risk’ transgender prisoners in their own overnight accommodation block at Downview Women’s prison with access to communal activities within the main site alongside other women. The following extract is from their trans unit policy obtained by Freedom of Information.

10.3 [Trans]Women will have access to the following activities within the main site alongside other women in line with their individual care plans; • Off unit activities i.e. gym, education, religious study and faith awareness, substance misuse courses, employment. Access to these activities and level of supervision required will be part of the individual’s risk assessment. • Access to offending behaviour programmes. • Faith services.

Under these rules, the existing Gender Recognition Act has already forced the UK government into the position of having at least four male sex offenders living in a women’s prison.

How many of the 1000+ Scottish prisoners will decide to use the self-declaration process to access one of the women’s prisons in England? How many of the 200+ high-risk sex offenders will need to be housed in the 16-bed trans accommodation unit at Downview?

Experts have already warned that a self-ID system is likely to be exploited by prisoners.

” It has been rather naively suggested that nobody would seek to pretend transsexual status in prison if this were not actually the case. There are, to those of us who actually interview the prisoners, in fact very many reasons why people might pretend this. These vary from the opportunity to have trips out of prison through to a desire for a transfer to the female estate (to the same prison as a co-defendant) through to the idea that a parole board will perceive somebody who is female as being less dangerous through to a [false] belief that hormone treatment will actually render one less dangerous through to wanting a special or protected status within the prison system and even (in one very well evidenced case that a highly concerned Prison Governor brought particularly to my attention) a plethora of prison intelligence information suggesting that the driving force was a desire to make subsequent sexual offending very much easier, females being generally perceived as low risk in this regard.”

By wiping away all sensible checks and balances the Scottish government is creating a loophole for predators and pretenders to exploit, not just in Scotland but across the whole of the UK. Every one of the Scottish male prisoners currently housed in England and Wales will be allowed to swap their sex on paper by simply filling in a few forms. No one could stop them and they won’t need to dress in women’s clothes or even shave off their beard. If they insist they are female they are, that’s how self-ID works. The question to ponder is not will they exploit this opportunity. The question is why do you think they won’t.

Anyone can become eligible to use the Scottish application route if they become “ordinarily resident in Scotland”. We asked the Scottish government to confirm what this meant. This is the answer we received from the Family Law team.

The requirement in the draft Bill is for the applicant to be the subject of a Scottish birth register entry or ordinarily resident in Scotland at the time of the application.   Once the application is made, there is no provision in the current draft Bill requiring an applicant to remain ordinarily resident in Scotland.   This reflects that a person might have to move for employment or other reasons.

We also consulted Home Office guidance regarding the legal definition of ‘ordinarily resident’.

“This does not mean that the person must intend to stay in the place indefinitely. They may have a settled purpose even though it is for a strictly limited period.”

“The purpose may be general or specific, such as for education, employment, health or family.”

“A person may become ordinarily resident on arrival”

Based on this information is it reasonable to presume that people outside of Scotland will be able to access the Scottish application route by simply renting accommodation in Scotland for a short period of time and be able to apply on the day of their arrival. These people may then return to their original home elsewhere in the UK, bringing their new birth certificate with them.

This issue was covered in The Sunday Times here.

4. Children of families living in Scotland will be able to get a new birth certificate at aged 16.

There are currently half a million people living in Scotland who were born elsewhere in the UK. They will all be eligible for sex change on demand based on their ordinarily resident status. But also, if any of these people have children living with them they will also be able to change sex status without parental consent from the age of 16.

5. All students going to Scottish universities will be eligible.

Latest figures show there are 31,745 students at Scottish Universities, with 16% of them coming from elsewhere in the UK. That means that under Scottish law 5000 students from England and Wales will become eligible to swap the sex on their birth certificates.  In practical terms this means that your son or daughter could apply for a GRC in freshers week and have a new birth certificate by the time they start the next semester in the new year.

The Scottish government is running a public consultation on it’s Gender Recognition Reform Bill. It closes on the 17th March 2020. It is open to everyone, you don’t have to be Scottish to submit your views. If you are concerned about how this Scottish law could impact women in England and Wales please make your views known.