You are here: Home / Toilets & Changing rooms / Why do women want and need single-sex changing rooms?

It is a well established custom that when women need to undress in a public space they do so away from males. This has been made necessary because males commit the overwhelming majority of sexual crimes, and females are at a particular risk of sexual crimes undressing. More sexual incidents are reported in mixed-sex changing spaces compared to single-sex. Therefore, providing women with female-only changing rooms is a simple, effective and common-sense safeguarding policy. 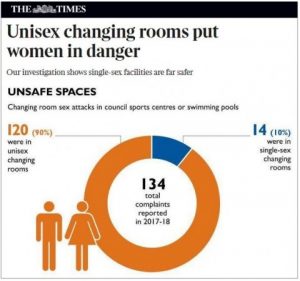 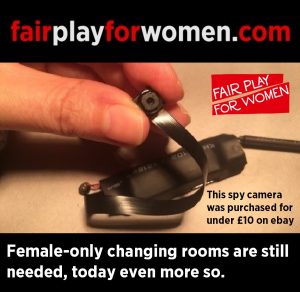 When a woman enters the women’s changing rooms she reasonably expects to be sharing that space only with other members of the female sex and for service providers to have in place the lawful single-sex policies she relies upon for her privacy, dignity and safety.

Recently however, many organisations are changing their policies to encourage transgender participation and to create a more welcoming environment for all. Whilst an admirable aim, and one that Fair Play For Women supports, in the rush to introduce new trans-inclusion policies the adverse impact on women is being overlooked.

The unspoken contract between women and service providers when it comes to changing rooms is now being broken. Women are becoming aware of this and voicing their concerns in increasing numbers. Service providers are putting themselves at an increased risk of litigation and reputational damage by relying on simplistic and incomplete trans-inclusion guidance and elevating the needs of one protected group over another.

Single-sex services are lawful. The purpose of this Fair Play For Women ‘changing rooms’ campaign is to promote public awareness of women’s existing legal rights so women know what they can expect and ask for. We also offer comprehensive and accurate policy guidance for service providers as they navigate their way through this sensitive and controversial area.

You may also be interested in this guest post about the issue of miscarriages in public toilets.