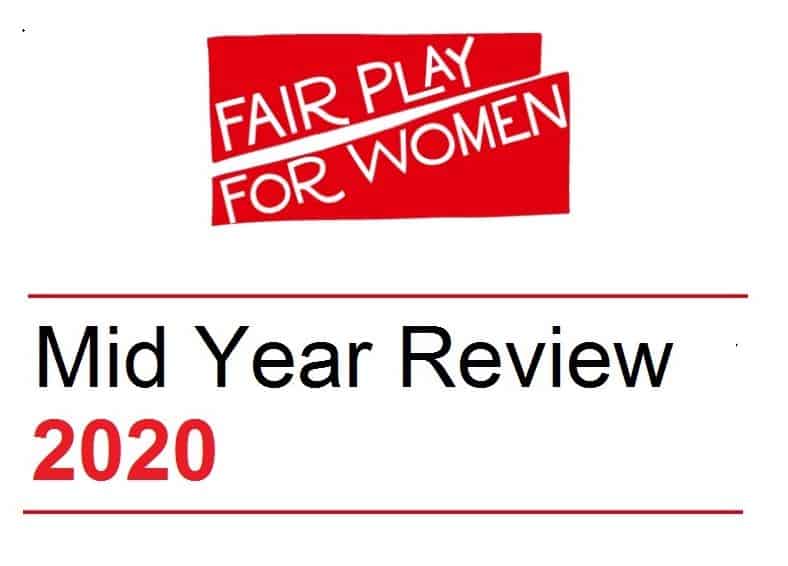 This year, along with our core focus on prisons, sport and legal reform, we set out to protect the meaning of the word “woman” and “female” in the media and in data collection. Here’s a brief round-up of our activity and progress.

Our wish for 2020 is that women’s voices will continue to be heard, that policy-makers will see it as their duty to consult women’s groups, that they will listen to us, and that they will be able to do so openly. Although some of our meetings remain confidential, there are signs that the age of #nodebate may be over. We hope the tide is turning.

Our work to engage sports bodies and raise awareness of the issues is ongoing. Highlights of the year so far:
Dr Williams was invited to present at a two-day meeting held by World Rugby in February 2020 to review the safety concerns surrounding the inclusion of trans players in women’s rugby. A broad range of speakers representing all sides of the issue were heard by a working group appointed by World Rugby. The working group’s subsequent recommendation was that transwomen should not be allowed to play women’s rugby. The proposed guidelines are now being considered by Rugby Union’s national governing bodies, with a final decision from World Rugby expected in November.

There has been a potential breakthrough in the fight to reinstate the sex boundaries of female sport. The Sports Council Equality Group, representing all five of the UK’s Sports Councils, has recently commissioned independent sports consultants to consult widely with athletes, coaches, officials, sports scientists, sports lawyers and campaign groups, and to produce new guidance for national governing bodies (NGBs) on trans-inclusion in competitive sport. In June, Fair Play For Women was asked to participate in this review.

There is also encouraging dialogue with other sports federations which we hope to report on at the end of the year.

We raised concerns about the impact on women’s prisons in England and Wales if Scotland goes ahead with its plans for GRA reform. The proposed changes would enable Scottish-born prisoners in England and Wales to be able to get a Gender Recognition Certificate on demand. Under Her Majesty’s Prisons and Probation Service policy they could then transfer to a woman’s prison. We showed how over 1000 male prisoners could be eligible for female sex status using the Scottish application route, of which around 200 would have convictions for sexual offences.

While UK-wide GRA reform was on hold, the Scottish government pressed ahead with their own proposals.

Dr Williams met with women’s groups and spoke at a public meeting in Scotland to support the Scottish campaign against sex self ID. She also attended and spoke from the floor at a meeting for ministers to hear about the impact of GRA reform on women, hosted by Jenny Marra MSP in the Scottish parliament.

We have ensured that the Minister for Women and Equalities, Liz Truss, knows she has support for her stated intention to ensure single-sex spaces are protected. We responded to her announcement with a short campaign which generated over 3000 emails to her office in a single day.

Protecting the meaning of ‘woman’ and ‘female’

A priority for this year is accurate reporting in the media about sex and gender identity. We continue to call attention to media reports which misrepresent current UK law. Many people have been led to believe that transwomen are entitled to be treated as women in all cases, whether they have a GRC or not, and regardless of how women’s rights are affected. This is not the case in current legislation, and we believe it is important for public understanding that the law is correctly represented in the media. We have scored a couple of victories in this campaign. We will continue to push for honest, accurate and unbiased reporting.

Accurate and meaningful data collection also relies on using a clear and widely-understood definition of sex. As the Office for National Statistics (ONS) prepares for the next national census, Dr Williams was the stakeholder representative for sex-based rights of women and girls at the ONS round table meeting, speaking alongside Stonewall and other trans groups. The meeting was to discuss the wording of the guidance around the sex question. Despite the introduction of a new question for transgender people about gender identity we learned the ONS are still planning to allow the sex question to be answered according to self-identification rather than sex registered at birth. We are working hard to reverse this.

The Independent Press Standards Organisation, IPSO, called for submissions as it reviews its guidance to the Editors’ Code of Practice. Our submission showed how the current Code conflates sex and gender identity, and why this matters. We called for the Code to ensure that sex is reported when it is relevant, and that if someone’s self-declared gender identity is being reported, it should be stated as such and not simply reported as if it were their sex.

We have submitted a series of complaints to IPSO this year regarding inaccurate use of the word ‘woman’ and ‘female’ in newspaper headlines. We will shortly be meeting with the chair of IPSO and its head of complaints.

We have also had to step in to defend our own reputation when using the word ‘male’ to discuss policies regarding transgender women. IPSO ruled in our favour when a local newspaper called us transphobic, and we have also complained to a local council and to the Liberal Democrats about abusive tweets by one of their local councillors.

In early February the World Rugby conference was widely reported, with Dr Williams interviewed on TV and quoted in print. This was followed by extensive BBC coverage of the recommendations in July, with interviews broadcast on TV, BBC Radio 4 news bulletins and commentary on the BBC news website, as well as newspaper coverage of the safety risks of transgender inclusion in women’s rugby.

The UK-wide risk for female prisoners posed by the Scottish GRA reforms featured in the Sunday Times. BBC Politics covered the issue of mixed-sex hospital wards. arising from accepting self-declared gender as if it were a patient’s sex.

Dr Williams was a guest on Julia Hartley-Brewer’s Talk Radio show to respond to events, such as when a rape crisis centre advertised for “self-identified women”, when the UK government’s long-awaited response to the consultation on GRA reform was leaked, and when a female-born transgender person lost an appeal to be named on their child’s birth certificate as the father after having given birth to the child.

World Rugby has made the first move in re-establishing the boundaries of women’s sport. We are delighted to hear this, and optimistic that other sports bodies will find the courage to follow.

The long-awaited announcement from the British government on GRA consultation and next steps has been delayed again. We continue to lobby relevant decision-makers.

We await the outcome of IPSO’s review of its Editors’ Code, and hope it will encourage more accurate reporting in cases where sex matters, rather than always defaulting to an affirmation of gender identity.

We are also optimistic that the Sports Council Equality Group will recognise the need for greater consideration of the impact of trans inclusion policies on women and girls, and will develop new guidance for national governing bodies which redresses the balance.

You can help to defend female sex-based rights by making a donation. Fair Play For Women receives no formal or government funding to do the vital work we do. We rely completely on donations made by our supporters.